The Australian Institute of Health and Welfare (AIHW) shows that an estimated 31% of Australians have chronic respiratory conditions, with a 4.7% mortality10,11. Chronic respiratory disease burden is higher among Australian Aboriginal people in comparison to their non-Aboriginal counterparts12,13, especially among those living in the Northern Territory (NT)14. NT has the highest proportion of Aboriginal people among all Australian states and territories, at about 30%15. The authors’ previous study reported that adult Aboriginal patients living in the Top End Health Service (TEHS) NT region of Australia have higher rates of chronic respiratory conditions and a significant proportion have co-existent bronchiectasis along with chronic obstructive pulmonary disease (COPD)16-19.

Hence, in this retrospective study involving 388 adults, the authors compared demographic and clinical characteristics to determine if risk factors, co-morbidities and/or outcomes differ between adult Australian Aboriginal and non-Aboriginal patients with bronchiectasis.

The authors retrospectively reviewed the medical records of patients diagnosed with bronchiectasis in the TEHS region of the NT between 2012 to 2017 (Fig1). These patients were referred to the Royal Darwin Hospital respiratory and sleep service, which serves about 180 000 people, with a population density of 0.16 people per kilometre radius in the northern, subtropical part of the NT. The majority of the NT’s population resides in the urban capital of Darwin, while the remainder live in rural and remote communities. The adult respiratory service based at Royal Darwin Hospital undertakes specialist outreach service visits to 20 of these remote communities one to three times per year. 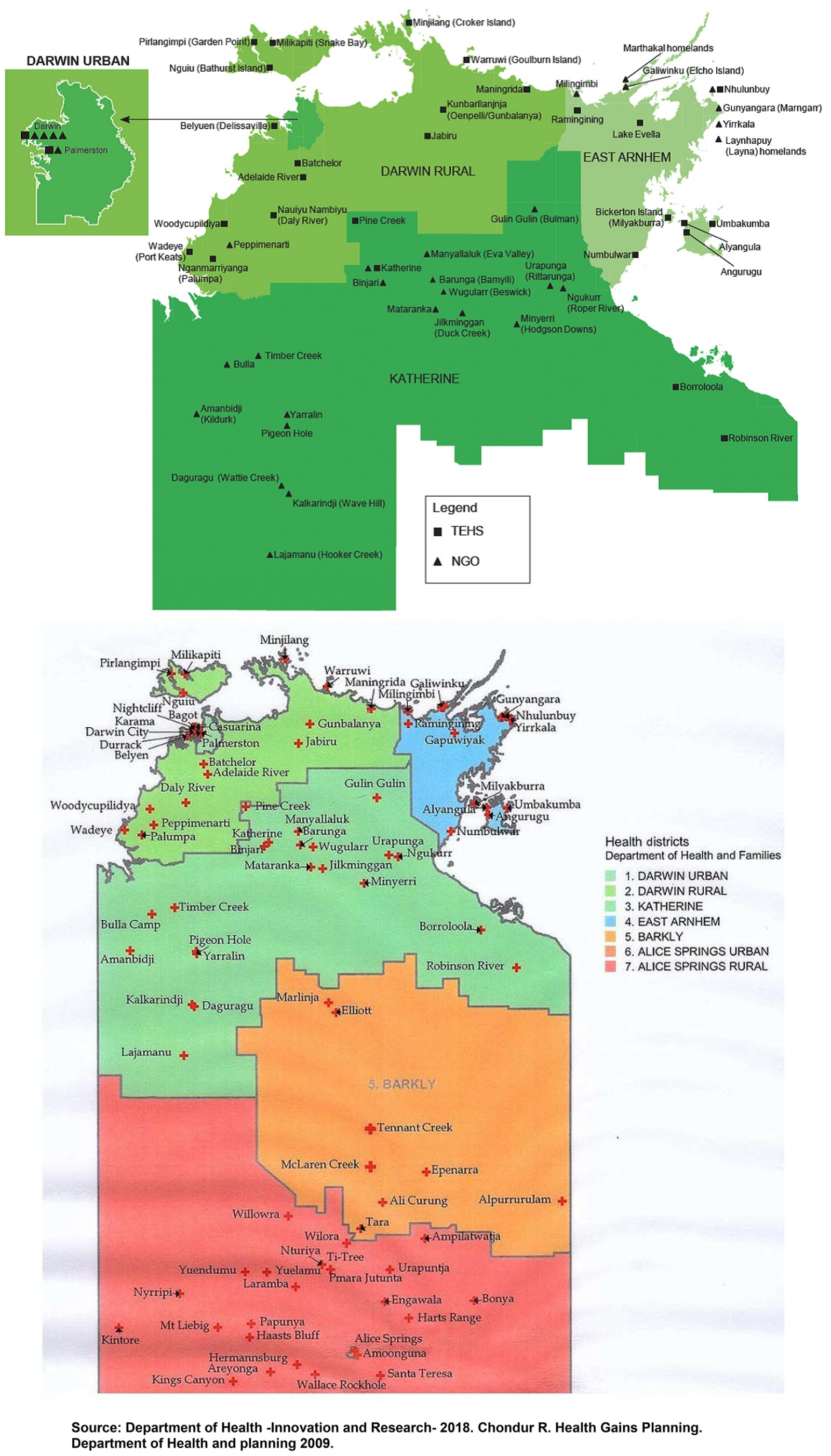 The authors also reviewed all pulmonary function tests. Spirometry results were reviewed for quality and those fulfilling American Thoracic Society and European Respiratory Society criteria were included in the analysis. Only spirometry tests graded as acceptable for session quality as assessed individually by volume–time and flow–volume graphs were included in this study. In the absence of specific reference values for the adult Australian Aboriginal population29, the NHANES-III Caucasian reference was used to derive the predicted values30. Chest radiology (chest X-ray and CT scan) characteristics were assessed to confirm the presence and radiological distribution of bronchiectasis. Sputum microbiology data were collected, which included any previously available results, and any other relevant investigations were also recorded when available. The FACED severity score31 was used to depict a measure of bronchiectasis severity.

The authors also collected mortality and hospitalisation data restricted to respiratory-related admissions including exacerbations of bronchiectasis, COPD/asthma, pneumonia and respiratory failure. Exacerbations were defined as per the available medical record entries (either presentation to community health clinics or to a hospital emergency department with acute worsening of respiratory symptoms and treated with antibiotics) during the previous year of the study period (2016–2017).

Groups (Aboriginal and non-Aboriginal) were compared using the statistical package STATA v15 (Stata Corp; http://www.stata.com). Continuous data were described with median and interquartile range (IQR) and analysed using Wilcoxon rank–sum (Mann–Whitney) test. Categorical data were described with counts and percentages, and were analysed with a χ2 or Fisher’s exact test. A two-sided p-value less than 0.05 was considered statistically significant.

This study was approved by the Human Research Ethics Committee of the NT Department of Health/TEHS and Menzies School of Health Research (HREC 2016-2637). As this was a retrospective study, no consent was obtained and a waiver for individual informed consent was granted by the ethics committee.

Pulmonary function parameters, sputum culture results and chest CT scan findings, including FACED bronchiectasis severity scores, are shown in Table 3. Of the 263 spirometry results available for review, 161 were considered suitable for analysis. There were significant differences in spirometry values between groups. The forced expiratory volume after 1 second (FEV1) and forced vital capacity (FVC) values were significantly lower among Aboriginal patients but the FEV1/FVC ratio was similar among Aboriginal and non-Aboriginal patients.

There were 349 CT results available for review (Table 3) (Aboriginal n=232, non-Aboriginal n=117). Radiological investigations for the remaining patients were performed externally but had been documented to have bronchiectasis. The most common locations of bronchiectasis were the left and right lower lobes. A significantly higher proportion of Aboriginal patients had emphysematous changes. The FACED score could be assessed in a subset of 92 patients and most were assessed to have mild to moderate bronchiectasis severity in both groups (Table 3).

Airway-directed therapy, exacerbations, hospital admission rates and mortality are shown in Table 4. Respiratory-specific, airway-directed therapy among both groups significantly differed. Higher proportions of Aboriginal patients were prescribed long-acting bronchodilators and inhaled corticosteroids. Medical record entries showed 124 (32%) of the patients had documented evidence of being advocated airway clearance devices. In the previous 1 year during the study period, exacerbation rates were higher among Aboriginal people, 29% in comparison to 18% amongst non-Aboriginal people. However, there were no significant differences in the hospitalisation rates in both groups. Mortality data showed that the mean age of death was significantly lower amongst Aboriginals (60 years) compared to non-Aboriginal patients (76 years).

Table 2:  Respiratory conditions and other medical comorbidities among Aboriginal and non-Aboriginal participants 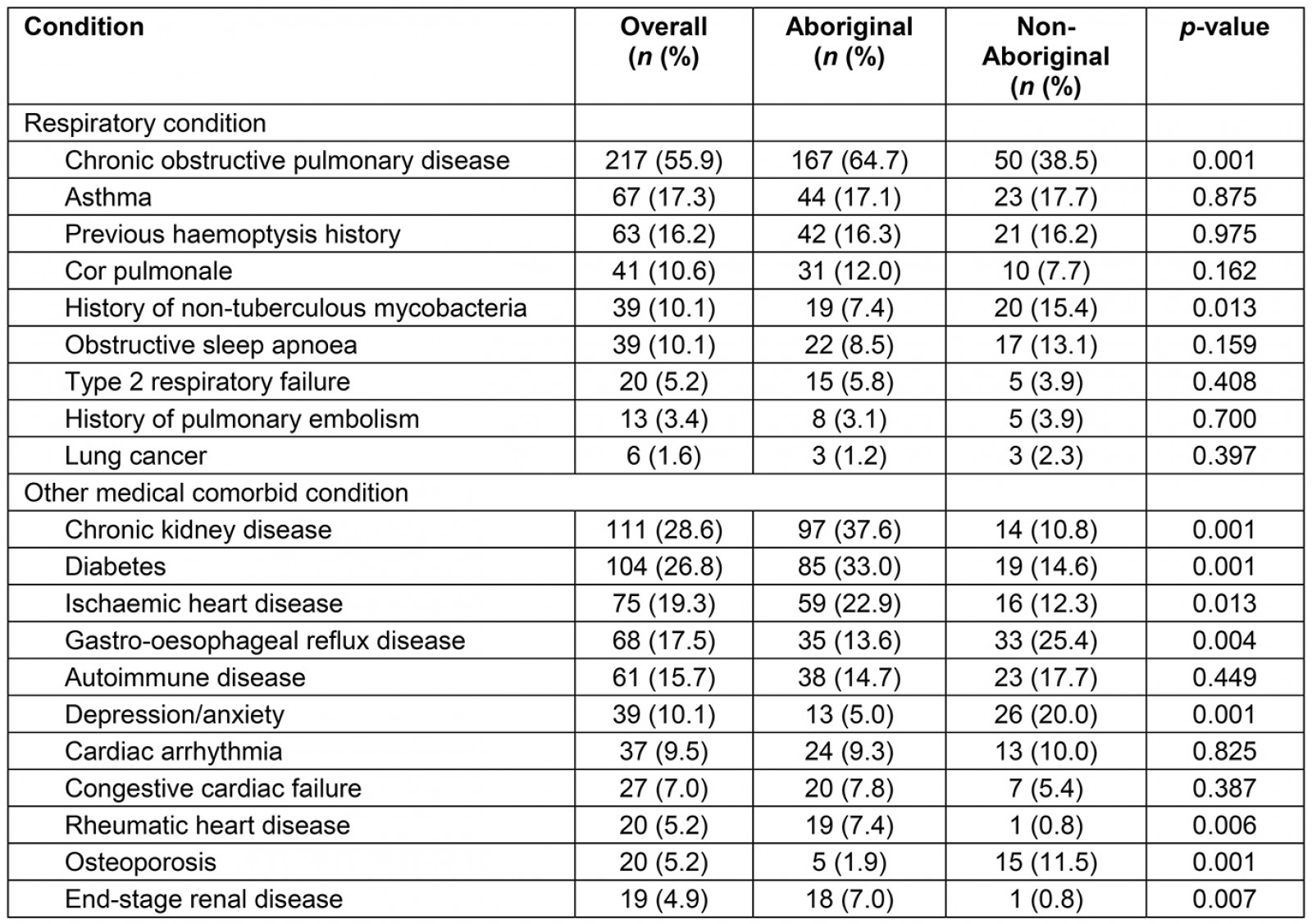 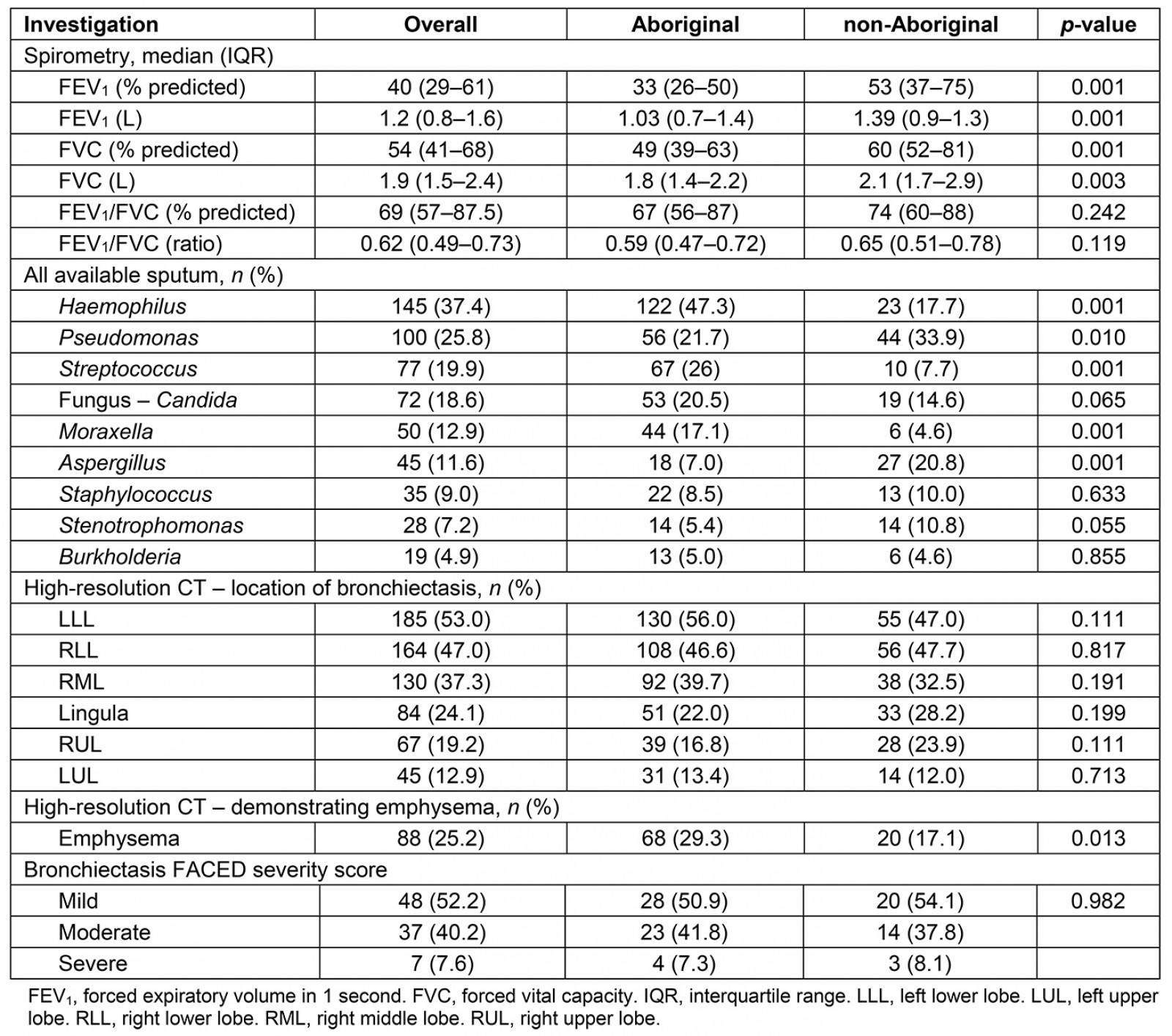 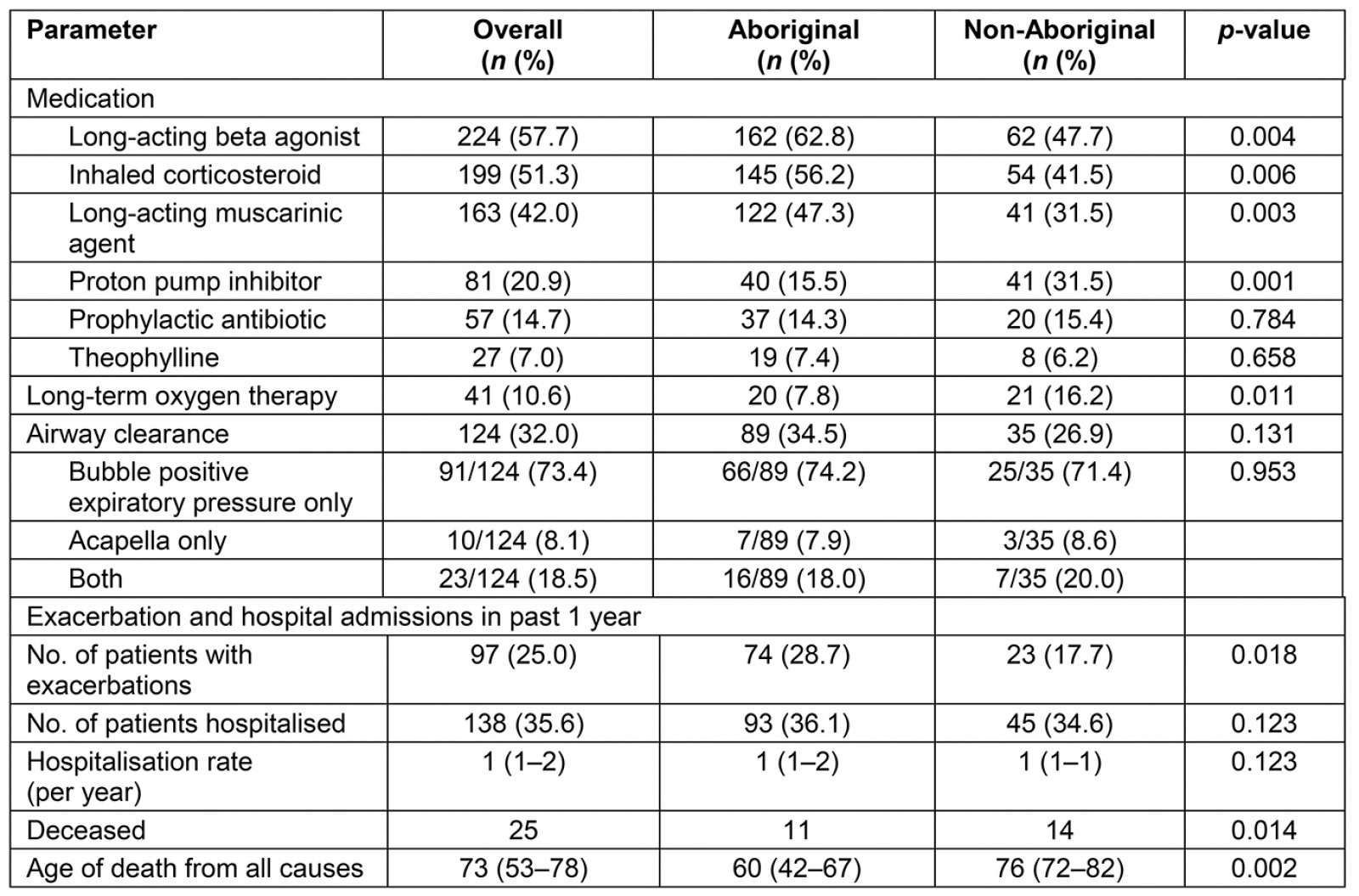 This study demonstrated the higher burden of bronchiectasis among adult Australian Aboriginal people, compared to non-Aboriginal people, living in the subtropical TEHS region of the NT in Australia. It is the first study to compare the clinical characteristics, demographic profile and outcomes among adult Aboriginal versus non-Aboriginal Australian patients with bronchiectasis within a defined single health service region. Aboriginal adults with bronchiectasis were much younger, had higher self-reported smoking rates, alcohol consumption, and the majority lived in the regional, remote or very remote communities of the NT. Moreover, chronic co-morbid conditions, in particular COPD, were higher in Aboriginal patients. Outcomes were poorer among Aboriginal patients in comparison to non-Aboriginals, with significantly lower FEV1 and FVC values, a higher proportion with exacerbations and earlier mortality.

A trend towards increasing morbidity and mortality secondary to adult respiratory disease, including bronchiectasis, with differing aetiology and phenotypic characteristics, has been reported in various populations globally32-38. Similarly, the recent Australian Bronchiectasis Registry study has shown similar trends in the wider non-Aboriginal Australian population25. The present study adds to the limited knowledge in bronchiectasis disease profile among Aboriginal patients, especially living in the regional and remote communities of the NT of Australia.

The present study highlights the potential impact of associated respiratory and non-respiratory co-morbidities in this Australian Aboriginal population. The greater prevalence of chronic, non-communicable diseases in this population is likely to contribute to increased healthcare utilisation, morbidity and premature mortality in Aboriginal people in Australia. To reduce the prevalence and impact of bronchiectasis, access to best interventions is required. These includes sputum-guided antibiotic therapies, effective airway clearance and pulmonary rehabilitation48,49. Facilitating access to culturally appropriate services and treatments for Aboriginal people, including those living in remote communities, and the early recognition of the precursors of bronchiectasis, will be key50.

Adult bronchiectasis is no longer considered to be an orphan disease51. While Aboriginal patients with bronchiectasis died at a much younger age (60 years) than non-Aboriginals (73 years) this gap of 13 years is substantially smaller than the previously reported 22 years26. Nonetheless, this gap remains unacceptably large and needs addressing. The present study also highlights important differences in the way bronchiectasis manifests among Australian Aboriginal and non-Aboriginal patients. These provide an opportunity to explore the pathophysiological or environmental basis for these differences as a mechanism for developing and evaluating targeted interventions. The position is ideal to move from ‘not enough care’ to ‘good enough care’ for bronchiectasis26, but this will require further research.

The results of this study should be interpreted carefully for several reasons. The study participants included were those referred to the specialist respiratory service and those admitted to hospital, so the results may not be representative of the entire community. Thus, the authors’ assessment of bronchiectasis disease burden is likely to be an under- rather than over-estimation in the Aboriginal population of TEHS region in the NT. The retrospective nature of the study may have blurred the differences between groups seen in the study. Availability of the FACED bronchiectasis severity scores was also limited as it was only available in a small subset. Also, the spirometry data is limited, not only because of the absence of reference values for Aboriginal adults, but also in number as a proportion did not have spirometry data (the authors included only spirometry tests graded as acceptable for session quality). Last, the study lacked comparative data on the aetiology of bronchiectasis.

This study is the first to present the bronchiectasis disease profile among the Australian Aboriginal and non-Aboriginal population living in a single health service in a remote and regional Australian setting. The study has demonstrated that Aboriginal adults with bronchiectasis in the TEHS region are much younger, have higher smoking rates, a greater prevalence of respiratory and non-respiratory co-morbidities, poorer lung function, more frequent exacerbations, and die at a younger age in comparison to their non-Aboriginal counterparts. There is a clear and urgent need for feasible and effective interventions to reduce this inequity through primary prevention, improved delivery of existing therapies and the development and evaluation of new treatments.

We sincerely thank the Aboriginal community healthcare workers and former respiratory physicians at the Royal Darwin Hospital Dr Sanjiwika Wasgewatta, Dr Anuk Kruavit and Dr Thilini Basnayake for their support towards this study.

This PDF has been produced for your convenience. Always refer to the live site https://www.rrh.org.au/journal/article/6390 for the Version of Record.