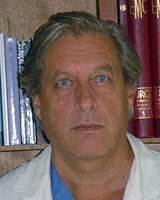 © Stefano Zucchi 2009 A licence to publish this material has been given to ARHEN, arhen.org.au

Merkel cell carcinoma (MCC) is a rare and aggressive skin cancer. The first case was described by Toker in 1972 as a trabecular carcinoma of the skin. The most accepted origin of MCC is the Merkel cell (touch receptor). Merkel cell carcinoma occurs mostly in Caucasians aged over 65 years as a dome-shaped purple node on the head, neck or extremities.
Case report: This report describes a case of MCC of 0.5 cm size, located on the left upper leg. The patient was Caucasian, female and aged 69 years with the specific risk factor of a history of sun exposure on the beach for 50 years. The excision biopsy returned a diagnosis of MCC. The excision of the biopsy scar, with clear margins of 3 cm and to a depth of 3 cm was performed 2 days later and returned a result of no MCC cells present. Biological tests were normal. No lesions were detected on CT scan of thorax and abdomen. No dissemination was detected on PET scan. It was ranked as stage I MCC. National Cancer Institute guidelines (2007) were used for follow up: physical examination every 3 months, PET scan every 6 months for 1 year; after this physical examination every 6 months and PET scan every year for 5 years.
Conclusion: The role of the primary care physician operating in remote location is crucial for the early detection of skin cancers. Early detection is the only chance for a patient to survive an MCC. Every primary care physician operating in a remote location should master the surgical technique for excision biopsy, the gold standard for diagnosis of skin cancers.

Merkel cell carcinoma (MCC) is a rare, lethal cancer of the skin accounting for less than 1% of cutaneous malignancy1. More than 400 new cases of MCC occur in the USA every year2. The incidence of MCC appears to have tripled during the past 20 years3. The course of Merkel cell carcinoma is aggressive nodal invasion, distant metastasis and a high rate of recurrence4.

Toker reported the first case of MCC in 1972. He described the tumor as a trabecular carcinoma of the skin5. The origin of this cancer is controversial. Possible cells of origin are: the Merkel cells (touch cells), the cells of the amine precursor uptake and decarboxylation (APUD) system and a residual epidermal stem cell6. Different causes of MCC have been reported in the literature. There is strong evidence that exposure to UV light can trigger the mechanism leading to the cell mutation responsible for the MCC7. Many authors agree that HIV infection, immunodepression, organ transplantation and B-cell neoplasia increase the frequency and aggressiveness of MCC8,9. Recently a viral origin (polyomavirus) has been proposed for this cancer10. 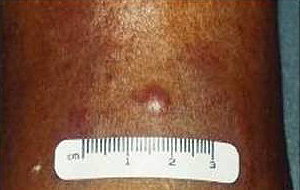 
The AEIOU acronym was used to describe the then most common clinical features of MCC: Asymptomatic, Expanding rapidly, Immunosuppression, Older than 50, location on a UV exposed site11,12. Histologically MCC has been classified in 3 subtypes: trabecular, intermediate and small cell7. In a literature review of 1024 patients with MCC, 98% of reported cases occurred in whites and 58% in males9. Merkel cell carcinoma is a disease of the elderly with an average age at time of diagnosis of 69 years13. The location of the primary MCC has been described as: head and neck (40%), extremities (33%) and trunk (23%). A local recurrence rate of 25%-44% for MCC is much higher than that of melanoma9, and this high rate of local recurrence has been attributed to inadequate surgical margins12. Merkel cell carcinoma frequently involves regional lymph nodes with 10%-45% of patients having regional lymph node metastases at initial presentation. Between 50% and 70% of patients diagnosed with MCC will develop regional lymph node metastases in the first 3 years9. The staging for MCC is described (Fig2)14.


More than 50% of patients in stage II will develop lymph node metastasis in the first 6 to 12 months after initial diagnosis15. The most common sites of distant organ metastases are: liver, brain, lungs and skin16. The mortality rate for MCC exceeds that of melanoma at 72% at 2 years and 55% at 3 years17,18. Patients treated with MethoxsalenTM and ultraviolet A for psoriasis have an increased incidence of MCC19. Worldwide only 52 cases of MCC have been reported in transplant recipients8. Few cases of MCC have been diagnosed in primary care20 and none of these in France.

Written consent was obtained from the patient for the publication of this case.

In April 2008 a 69 year old Caucasian woman presented to primary care with a skin lesion on the left leg, which she had discovered in the previous week while showering. In the past few days she had experienced an itching sensation associated with the lesion. She had a long history of sun exposure on the beach over 50 years. On the physical examination a skin lesion of 0.5 cm was observed on the left upper leg. A clinical diagnosis of infected sebaceous cyst was made and a surgical excision biopsy was performed on the same day.

After informed consent and local anaesthesia with XylocaineTM 2%, an elliptical incision was made that included the lesion, and the specimen was immediately placed in formalin. The skin was closed with an interrupted suture of MiraleneTM 4/0, which was removed on day 7 when the surgical wound was healing well. The pathology report received on day 10 described a Merkel cell carcinoma of 0.5 mm diameter, fully excised with free margins in an elliptical specimen of 0.7 cm of maximum diameter.

On day 12 after the excision biopsy, with informed consent, a further excision procedure was performed. Local anaesthetic (XilocaineTM 2%) was injected in layers and an elliptical incision was made to remove the surgical scar. Margins of 3 cm from the surgical previous scar and a depth of 3 cm were assured. Closure was in layers with an interrupted suture with VycrilTM 4/0 in the subcutaneous tissue and an interrupted suture with MiraleneTM 4/0 in the skin. The specimen was sent to pathology and a report was received on day 6 after the scar excision. It described a specimen of skin including a scar. The thickness was reported to be 3 cm with margins of 3 cm around the scar; no MCC cells were present. Skin sutures were removed on day 7 when the surgical incision was healing well with no complications.

On physical examination no local and regional lymph nodes were detected and biology tests were normal. A CT scan of the thorax and of the abdomen on day 16 detected no lesions. A PET scan on day 45 detected no spread of the primary MCC to lymph nodes, confirming no other MCC localization in the skin or organs. On the base of these findings a diagnosis of a stage I MCC was made.

Few cases of MCC diagnosed in primary care have been reported in the literature worldwide, and this may be the first case of MCC discovered and treated in a primary care setting in France.

It is almost impossible to diagnose MCC on the basis of a physical examination12. The most common presumptive diagnosis is a benign cyst or acneiform lesion (32%), followed by lipoma (6%), fibroma (4%) and vascular lesion (4%). Among presumptive diagnoses, a malignant diagnosis comprises 36%, with non-melanoma cancers (NMC) at 19%, lymphoma (6%), metastatic carcinoma and sarcoma (2%), and the correct diagnosis of MCC is made in only 1% of cases11. Diagnosis is based on a typical histology with the immunohistochemistry report on the pathology specimen12.

Unfortunately we live in an time of epidemic NMC, with a great increase of NMC in the last few years23. Increasing numbers of melanoma, NMC and MCC will be seen in general medical practice every year, world-wide24; however, the GP cannot rely on physical examination to make a diagnosis11,12 and excision biopsy is the gold standard for all skin lesions12,24,25. Because the clinical diagnosis of skin cancers is so unreliable and the incidence is soaring, using treatments such as diathermy and cryosurgery in general medical practice are no longer acceptable25. These techniques destroy tissue and as a consequence it is impossible to perform a pathological examination. Nor should skin biopsies be made by shaving or punch biopsy because of a risk of disseminating cancerous cells by the bloodstream26. In Mohs micrographic surgery the physician removes the tumour layer by layer and analyses the resected tissue. This technique cannot be used in a medical practice due to a lack of resources and training, and there is no consensus on the role of this technique in the treatment of the MCC26.

Every effort must be made to achieve clear surgical margins because the rate of local recurrence is related to a lack of clear margins27. All tissue, sebaceous cysts included, removed in a general practice must be sent for pathological examination28. According to the National Cancer Institute 2007 Guidelines and other literature, for tumors of 2 cm or smaller presenting at stage I the accepted treatment is wide excision with free margins of 3 cm without lymph node dissection and without radiotherapy(Fig2)14,19,21.

For stage II MCC, lymph node dissection is recommended12,21,22. The role of sentinel lymph node biopsy is still unclear but, as for many other cancers, it may avoid invasive surgery12. Many authors advocate adjuvant radiation therapy to the primary site and to the regional lymph nodes6,9,12,21,22. Based on a retrospective review of the literature radiation therapy has been used in patients with large tumors, loco-regional lymph node invasion and when it was impossible to achieve clears margins21. The role of chemotherapy remains unproven in the treatment of MCC12 and the rate of distant metastasis and survival were similar for surgery alone and combination therapy (radiation and chemotherapy)22. However chemotherapy is the treatment used for patients with stage III, using a protocol similar to that used for small cell cancer, even if the impact on survival is uncertain12. Chemotherapeutic regimens are toxic and their side effects cause poor quality of life for the patient12. In the case of recurrence at the site of the primary tumor, adjuvant radiation therapy at that site as well as of the regional lymph nodes is the gold standard after surgery21.The role of the marker in the detection and follow up of MCC is not yet clear12.

Primary care physicians are in a unique position to perform skin cancer examinations20. In this age of epidemic melanoma and MNC the role of the primary care physician is crucial for early detection of skin cancer20,26. Merkel cell carcinoma is more deadly then melanoma and it is almost always misdiagnosed at the physical examination1,12,22. Because the prognosis of this lethal cancer is tied to the size of the primary tumor, early detection of MCC is mandatory9. For all these reasons it is necessary to maintain a high index of suspicion for MCC in every skin lesion that presents as a solitary dome-shaped nodule11. It is also imperative to proceed without delay to excision biopsy, the gold standard for diagnosis of MCC.

In remote general medical practice it is crucial for the primary care physician to master the surgical technique of excision biopsy. This technique is simple and can be quickly learnt and mastered12. In the best interest of patients and the wider social security system, a program of training for all primary care physicians operating in remote areas should be commenced without delay. The patient advantage is that early detection and treatment provides the only chance of survival of a skin cancer29. The economic gain for social security systems is that early detection avoids progression to later stages. In stage I, surgery alone is the only treatment required14,21,22. The cost of the surgical treatment in a general medical practice is negligible compared with the cost for surgery, radiotherapy and chemotherapy in a specialized centre.

29. Pacifico R, Grover R. Use of an early detection strategy to improve disease control in melanoma patients. The British Journal of Plastic Surgeons 2004; 57: 105-111.
This PDF has been produced for your convenience. Always refer to the live site https://www.rrh.org.au/journal/article/1072 for the Version of Record.