Obesity, dyslipidemia and cholesterol gallstone disease during one year of Antarctic residence 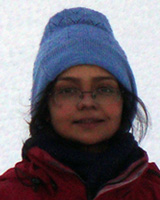 © Madhumita Premkumar, tarulata sable 2012 A licence to publish this material has been given to James Cook University, jcu.edu.au

Introduction: Age, gender, ethnicity, geographic location, diet, obesity, diabetes mellitus and dyslipidemia are known risk factors for development of gallstone disease (GD). We describe the development of four cases of symptomatic GD including a case of acute cholecystitis in Indian Antarctic expedition members during 1 year of polar residence and their response to 6 months of ursodeoxycholic acid (UDCA) therapy.
Methods: Twenty subjects were evaluated at baseline and at serial intervals using clinical history, dietary assessment, anthropometry, blood investigations and ultrasonography for development of gallstone disease. Ursodeoxycholic acid and lipid lowering agents were prescribed as indicated and response to therapy measured over a period of 1 year in Antarctica.
Results: Four cases of cholesterol GD and two cases of biliary sludge were detected after 4 months. Dyslipidemia including hypertriglyceridemia in four of 20 cases (20%), hypercholesterolemia in nine of 20 cases (45%) and low high density lipoprotein (HDL) cholesterol in six of 20 cases (30%) was seen to develop after 3 months of polar residence. Impaired glucose tolerance was found in three of 20 cases (15%), two of whom developed gallstones. Ursodeoxycholic acid therapy completely dissolved gallstones in three cases and led to partial resolution in one case at 6 months. A trial of lipid lowering agents and 1 month of UDCA led to resolution of biliary sludge in both cases.
Conclusion: Obesity, dyslipidemia, impaired glucose tolerance and high fat and caloric intake were found to increase the risk of developing cholesterol GD during the Antarctic expedition. Ursodeoxycholic acid therapy was found to be efficacious in dissolution of gallstones and prevention of formation of larger stones in cases with gall bladder sludge. The effect of geographical factors such as exposure to colder environments on the development of GD needs further research.

The Antarctic environment has exposed humans to extremes of low temperatures, low relative humidity, increased electromagnetic radiation and both social and geographical isolation. The cumulative effect of the circumpolar environment on human physiology, diet, metabolism, immunology, endocrinology and psychology is being studied in various populations wintering in the natural laboratory of Antarctica1. We report the dietary and metabolic factors resulting in the development of gallstone disease (GD) in six of 20 wintering expedition members during 1 year of Antarctic residence. The effect of the isolated Antarctic environment on biliary disease has not been reported previously. Indigenous inhabitants of the Arctic polar regions have been reported to have higher prevalence of obesity and gallstone disease2. A study undertaken in the rural population of Siberia in Russia reported that acalculous chronic cholecystitis and cholelithiasis were found in 8.5% and 8.8% of migrants to that region, respectively, compared to 4.5% and 1.5% of Aborigines, respectively, and concluded that biliary disease in this polar region was related to ethnic and geographical factors3. Dietary factors, physical activity and energy expenditure, obesity and dyslipidemia affect the hepatic secretion of cholesterol and saturation of bile leading to a lithogenic state. Thus, residence in the Antarctic environment and the consequent lifestyle changes predispose susceptible individuals to cholesterol GD.

The measurements obtained by the above-mentioned tests were used to calculate mean values for each patient and all cases as a whole. Student's t-test was used for both independent variables. The Student's t-test was performed to compare the difference of means between groups. A p-value of less than 0.05 was considered significant. Data were analyzed using Statistical Package for Social Sciences v13 (SPSS Inc; www.spss.com).

Dietary modifications, exercise and drug therapy, including atorvastatin (20 mg once daily at bedtime) and fenofibrate (200 mg once daily), were prescribed to the four subjects with GD at 4 months and ursodeoxycholic acid (UDCA; Ursotan®, Sanofi Aventis, Johannesburg, South Africa) was started in a dose of 600 mg/day. The subjects with biliary sludge were advised to begin dietary modifications at 3 months. In cases where the sludge did not resolve, and there was associated dyslipidemia, subjects were given a trial of lipid lowering agents (atorvastatin and/or fenofibrate) and 1 month of UDCA in a dose of 600 mg/day at 6 months.

The study was approved by an institutional board constituted by the director of the National Centre for Antarctic and Ocean Research, Ministry of Earth Sciences, Government of India. The study number is 24/2012.

The mean age of the 20 male team members was 39 ± 10.2 years. At baseline, eight (40%) were overweight, five (25%) were obese, two (10%) were underweight and only five (25%) had a body mass index (BMI) in the normal range (Fig1). We noted a progressive rise in the mean BMI during the expedition, the average weight gain being 1.2 kg in the first quarter, 1.3 kg in the second quarter and 0.6 kg in the third quarter. Of the subjects who subsequently developed biliary disease, three out of six (50%) were clinically obese at baseline, although their initial BMI was not significantly different from those who did not develop GD (p=0.092). At 3 months, however, these six subjects had a significantly higher BMI than those without GD. There was an increasing trend in the mean waist : hip ratios and a corresponding increase in the body fat percentage, while the lean body mass remained relatively constant (Fig2).

Symptomatic biliary disease was found in four out of six subjects who reported dyspepsia, abdominal discomfort after meals, back pain and nausea. Two subjects with biliary sludge were asymptomatic. One subject developed acute cholecystitis after 4 months and was managed conservatively with antibiotic therapy.

Figure 1: Changes in mean weight, BMI and lean body mass over one year of Antarctic residence.

Total caloric and fat intake was found to be higher and dietary fibre lower when compared with the regular diet in India. Mean total calorie intake was 2927.04 ± 472.05 kcal in summer and 2319.51 ± 355.56 kcal in winter. Fat contributed to 34.7% of energy intake in summer as compared to 28.3% in winter (Table 1). Fresh vegetables and fruit were only available during summer. However, since frozen foods including meat, fish, poultry and vegetables (carrots, spinach, peas, corn, beans and cauliflower) were readily available, there was no significant difference in the daily staple diet. Nonetheless, the high energy intake can be explained by consumption of calorie-dense precooked meals, instant noodles, biscuits and canned foods during field work in place of routine meals or as snacks in summer. Smoking and alcohol consumption were not found to have any correlation with the development of GD.

Table 1: Comparison of the daily nutrient intakes of the
team members during the polar summer and winter

Dyslipidemia including hypertriglyceridemia in four subjects (20%), hypercholesterolemia in nine subjects (45%) and low HDL cholesterol in six subjects (30%) was seen to develop after 3 months of polar residence. The normal range for serum cholesterol (180 ± 37 mg/dL), HDL cholesterol (44 ± 13 mg/dL) and triglycerides (119 ± 62 mg/dL) are as per age and sex matched Indian population means7. The mean triglyceride and HDL cholesterol were significantly higher and lower, respectively, in the group with GD than in those without (p< 0.05). We found no association between high total cholesterol levels and risk of developing GD (Table 2). Impaired fasting glucose was found in three subjects (15%), two of whom developed gallstones (Table 3).

Table 2: Serum lipid profile of the team during the expedition

Table 3: Serum glucose levels (mg/dL) of subjects over a 1 year period in Antarctica

At baseline, one subject was found to have asymptomatic biliary sludge, which did not develop into macroscopic stones during the Antarctic sojourn. At 4 months, four subjects were found to have multiple cholesterol gallstones and an additional person developed symptomatic biliary sludge. One subject developed acute cholecystitis with pericholecystic fluid collection and wall thickness of 5 mm. At 12 months of Antarctic residence and at least 6 months of therapy with UDCA and/or lipid lowering agents, only one subject had residual gallstones and two had evidence of biliary sludge. No new cases of GD were detected.

Residence in Antarctica has a profound influence on human physiology. However, in view of the small sample size of the wintering teams, the results of any study need to be interpreted carefully. This case series highlights the association of Antarctic residence with changed energy and lipid metabolism. As a consequence of changed dietary habit and lifestyle, the subjects in this study developed a positive energy balance, weight gain and obesity, hypertriglyceridemia, low HDL cholesterol and a lithogenic biliary profile8-11. Multiple factors may predispose individuals in polar environments to develop cholesterol gallstones and features of the metabolic syndrome (Fig3).

Figure 3: Multifactorial pathogenesis of cholesterol gallstone disease. The crucial stages in the formation of gallstones are
biliary sludge formation and cholesterol crystallization around a nidus to form a macroscopic stone.
Sites of intervention of lipid lowering agents such as statins and that of ursodeoxycholic acid (UDCA) have been shown.

Diet: The dietary assessment revealed calorie consumption and total fat intake far in excess of energy expenditure during summer. Increased consumption of energy-dense and processed foods was noted in summer when outdoor work was performed. During the lower activity period of winter, food intake including consumption of total fat and calories reduced significantly in many individuals as a result of a decreased requirement and increased awareness after diet counselling. In this case study, we found no association between smoking and alcohol consumption, and GD12.

Obesity and dyslipidemia: Obesity is a well recognized factor in GD pathogenesis. In our study, 35% of subjects had a normal BMI, 40% were overweight and 25% were obese. Of the six subjects with GD, two had grade 1 obesity, one had grade 2 obesity and the other three were overweight. Up to 50% of the obese individuals in the team developed GD. Caloric intake in Antarctica was noted to be higher in older articles in view of the increased metabolic need of thermogenesis and activity13-15. However, with the availability of better polar gear, central heating, limited cold exposure and sedentary work, the harshness of the polar environment is mitigated, resulting in a positive energy balance. Thus, the related issues of recommended dietary allowance and habitual physical activity in polar research stations need to be re-evaluated. In addition, the racial, genetic and social differences of the various countries running Antarctic stations need to be considered in context when comparing results with other research1. The changed lifestyle in the Antarctic environment and the energy dense diet may be associated with an increased risk of obesity and dyslipidemia, which predisposes susceptible individuals to GD16-19.

Obesity, dyslipidemia, impaired glucose tolerance and high fat and caloric intake were found to increase the risk of developing cholesterol GD during the course of the year-long 30th Indian Antarctic expedition. Ursodeoxycholic acid therapy was found to be efficacious in the dissolution of gallstones and prevention of formation of larger stones in cases with gall bladder sludge. The effect of geographical factors such as exposure to colder environments on the development of GD needs further research.

1. Simpson A. The effect of Antarctic residence on energy dynamics and aerobic fitness. International Journal of Circumpolar Health 2010; 69(3): 220-235.

2. Tsukanov VV. The prevalence and structure of biliary tract diseases in the rural population of the northern regions of Siberia. Ter Arkh 1997; 69(2): 30-32 (in Russian).

This PDF has been produced for your convenience. Always refer to the live site https://www.rrh.org.au/journal/article/2186 for the Version of Record.