Tribute to the life of Professor Ratie Mpofu 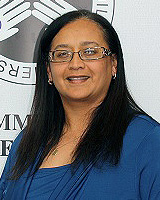 © Tracey-Ann Adonis, Priscilla S Daniels, Diane Gahiza 2014 A licence to publish this material has been given to James Cook University, jcu.edu.au

Ratie Mpofu was an Emeritus Professor at the University of the Western Cape (UWC), in Cape Town, South Africa. Born on 4 August 1945, she passed away on 19 October 2013 at 68 years of age.

Born in Zimbabwe, Mpofu married shortly after completing school, but her young husband was arrested by Ian Smith's government only one month later, and Mpofu had to go into exile in England. She left with a child on the way and the couple then endured a seven year separation. Mpofu used her time in the UK to obtain her diploma in physiotherapy, followed by a teacher's diploma and a BA in Social Science - the latter two while practising as a physiotherapist. When Zimbabwe attained independence, she returned to the land of her birth to work in the new government's Ministry of Health as Principal Tutor for rehabilitation. She continued her training and obtained a Masters in Physiotherapy from the University of Southampton in the UK, following which she again returned to Zimbabwe to spend several successful years educating a new generation of physiotherapists in her native land.

Prof Mpofu specialised in the field of rehabilitation, community based education and inter-professional education. In 1993 she moved to another country undergoing liberation, namely South Africa, and was appointed as a lecturer in the Physiotherapy Department at the University of Western Cape, where she proceeded to obtain her PhD.

Prof Mpofu was a proponent of developing future leaders in health through the implementation of teaching and learning methodologies that aid in facilitating optimal learning. She was active in the supervision and mentoring of postgraduate students at several higher education institutions, and published extensively in her specialised fields. She engaged in international discussions, including being a reviewer for and contributor to Rural and Remote Health, and held leadership positions in various national organisations, including the position of President of the Cape Mental Health Board, where she was a proponent for collaborative learning between the medical and allied health sciences, as she believed that engaging in collaborative learning experiences facilitated the development of 'better' health professionals.

Prof Mpofu retired in 2012 as Dean of the Faculty of Community and Health Sciences at UWC after a career that spanned almost two decades at that institution. During her retirement she continued to mentor students and to engage in another passion, namely writing for publication.

Emeritus Professor Ratie Mpofu was a wife to Joshua; a mother to Nola, Velakude and Veronica; a grandmother, a sister, an academic, a teacher, a colleague, a friend, a mentor. She will surely be missed in all spheres of life.

The assistance and support of the Media Office, Institutional Advancement, University of Western Cape in preparing this tribute is gratefully acknowledged.

This PDF has been produced for your convenience. Always refer to the live site https://www.rrh.org.au/journal/article/3001 for the Version of Record.