Dr Hideo Takano: Loss of the sole physician who continued practice in the disaster area of Futaba District, Fukushima Prefecture 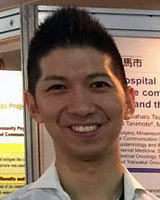 © Akihiko Ozaki 2017 A licence to publish this material has been given to James Cook University, jcu.edu.au

It was a death that will remain in my mind for the rest of my life. Dr Hideo Takano, director of Takano Hospital, died at age 81 in a midnight house fire on 30 December 2016.1 I immediately heard about the fire and his death and realized that a dire situation was unfolding, as Takano Hospital, the only operating hospital in Futaba District, which houses FDNPP, had 102 inpatients at that time. Dr Takano was the only full-time doctor there, and with his death it was obvious that the lives of the hospitalized patients would be at risk.

Takano Hospital (Fig1) is located 22 km south of the Fukushima Daiichi Nuclear Power Plant (FDNPP), the site of the nuclear disaster that occurred following the Great East Japan Earthquake and the subsequent tsunami in March 2011.

Dr Takano could be best described as a superhuman figure who, despite his advanced age, continually delivered medical care in the area stricken by the nuclear disaster. Originally a psychiatrist, he established his own hospital with 75 general and 64 psychiatric beds in Futaba District, Fukushima Prefecture in 19802; however, a very noteworthy point about him was his response to the nuclear disaster that would happen 31 years later.

In Futaba District, where six hospitals existed before the 2011 nuclear disaster, nearly all local residents were forced to evacuate immediately post-disaster, and Takano Hospital was the only facility that remained open and did not evacuate its patients. Dr Takano chose to stay with his patients, speculating that those with severe conditions may die during a stressful evacuation. Although his decision may have appeared reckless at first, it now appears to have been a reasonable judgement backed up by long years of experience as a clinician. Recent evidence shows that the post-disaster forced evacuation of vulnerable populations in Fukushima led to preventable deaths; for example, in nursing homes, those who were evacuated immediately had a risk of mortality more than three times higher than that of those who were not evacuated.3 Dr Takano's brave decision to remain and continue care at his hospital may have saved many patients' lives.

Alongside the hospital patients, it is notable that he additionally worked to secure the safety of the hospital staff. In the face of extremely limited public information on radiation spread immediately after the disaster,4 Dr Takano anticipated that radioactive agents from the FDNPP would likely spread north-west, the direction that the wind normally blew in that season and was in the opposite direction to the hospital. Again, his speculation proved accurate, given that the dissemination of radioactive agents towards his hospital were later observed to be minimal.5

Dr Takano recently earned a special posthumous honor from the Japanese emperor, for his continuous contribution to health of the local residents.

Through media coverage and social networking service, the current plight of Takano Hospital has attracted the attention of people throughout Japan. Consequently, nearly 20 doctors offered to work voluntarily in the month of January, and a 36-year-old surgeon applied to take the role of a temporary director for the months of February and March.6 A crowdfunding program, launched on 9 January to ensure the continued safety of the patients, achieved 8 940 000 yen (more than A$100 000) as of 28 February 2017, and is used to cover transportation and accommodation fees for volunteer doctors.7 The local healthcare providers in the areas affected by the 2011 Fukushima nuclear disaster, as well as Hirono Town Office and Fukushima Prefectural Office, must continue to do whatever they can do for the patients and residents, and to overcome the many issues yet to be solved for Takano Hospital and its long-term continuation.

This PDF has been produced for your convenience. Always refer to the live site https://www.rrh.org.au/journal/article/4403 for the Version of Record.