Introduction:  Dual healthcare system use is associated with higher rates of healthcare utilization, but the influence of rurality on this phenomenon is unclear. This study aimed to determine the extent to which rurality in the USA modifies the likelihood for acute healthcare use among veterans with heart failure (HF).
Methods:  Using merged Veterans Affairs (VA), Medicare, and state-level administrative data, a retrospective cohort study of 4985 veterans with HF was performed. Negative binomial regression with interaction term for dual use and geographic location was used to estimate and compare the associations between dual use (as compared to VA-only use) and emergency department (ED) visits, hospitalizations, and 30-day hospital readmissions in rural/highly rural veterans versus urban veterans.
Results:  The association between dual use compared to VA-only use and ED visits was stronger in rural/highly rural veterans (RR=1.28 (95%CI: 1.21,1.35)) than in urban veterans (rate ratio (RR)=1.17 (95% confidence interval (CI): 1.11,1.22)) (interaction p-value=0.0109), while the association between dual use and all-cause hospitalizations was similar in rural/highly rural veterans (RR=2.00 (95%CI: 1.87, 2.14)) and in urban veterans (RR=1.87 (95%CI: 1.77,1.98)). The association between dual use and all-cause 30-day hospital readmission was also similar in rural/highly rural versus urban veterans.
Conclusion:  Rurality significantly modifies the likelihood of ED visits for HF, although this effect was not observed for hospitalizations or hospital readmissions. While other patient- or system-level factors may more heavily influence hospitalization and readmission in this population, dual use appears to be a marker for higher healthcare utilization and worse outcomes for both urban and rural veterans.

Heart failure (HF) is a serious health condition currently affecting 5.8 million Americans1. In addition to causing significant morbidity, high hospitalization rates and decreased quality of life, HF is associated with high mortality with 1-year case fatality as high as 22%2. Among veterans, HF is the most frequent cause for hospital admission and readmission3. Dual use, defined as veterans enrolled in VA care who also received care from non-Veterans Affairs (VA) providers and facilities, has also been associated with increased rates of hospitalization, readmission, and mortality4. Dual use occurs frequently in veterans, carries the potential to be less efficient, less safe, and is likely increasing as a result of the Veterans Choice program5-7. Many veterans live in rural areas where access to care may be limited, and rural veterans may seek non-VA care for reasons different than those of urban veterans8-10. For example, given decreased primary care access, rural veterans may forego treatment in certain situations where their urban counterparts would present for care. Alternatively, during an acute event rural veterans may be more likely than urban veterans to receive care from a non-VA facility. Hence, differences in care patterns between rural and urban veterans may influence the association between dual use and outcomes. Therefore, this study aimed to determine the extent to which rurality modifies the association between dual use and ED visits, hospitalizations, and 30-day hospital readmissions.

A state-level cohort of veterans with HF receiving primary care from the Veterans Health Administration (VHA) was constructed by linking multiple patient and administrative files from the VHA, Medicare, and the Carolina Office of Revenue and Fiscal Affairs. Details of cohort construction have been previously published4. Subjects were categorized as having HF if they had one or more inpatient or outpatient diagnoses for HF in a given year (International Classification of Disease codes ICD-9 402.01, 402.11, 402.91, 429.3x, 425.xx, 428.xx). Patients with HF who were classified as dual users or VA-only users were included in a final analytic dataset (N=4985) if they had at least one episode of care for an emergency department (ED) visit or hospitalization during the study time period. Subjects were further categorized based on where they received acute ED and/or hospital care as VA-only users or dual users, which served as the primary exposure. Subjects were followed until death, loss to follow-up, or until December 2011.

The primary exposure of interest was dual use. Rural–urban residence acting as a potential modifier of the relationship between dual use and outcomes of interest was the primary covariate of interest. Rural–urban residence, as defined using Rural Urban Commuting Area (RUCA) codes, classified veterans as living in urban, rural and highly rural areas with veterans in rural and highly rural areas being combined into a single group. Additional covariates were age, gender, race/ethnicity, marital status, and service connected disability. Service connected disability is a marker for disease burden, has implications for copayments within VHA, and has been used in prior investigations of veteran patients11,12. Comorbidities were measured using the Elixhauser classification system and classified as present or absent for each patient13.

Due to the zero inflation in the study count outcomes leading to overdispersion (ie when the variance is greater than the conditional mean)14, a negative binomial framework was used to study the association between dual use and HF-related ED visits, hospitalization, and hospital readmission15,16. Zero-inflated negative binomial (ZINB) models were used, which are a mixture of a negative binomial model for the count outcome (including some zeros) combined with a logit model to determine the probability for excess zeros. The parameters in the ZINB model have conditional or latent class interpretations, which correspond to a susceptible subpopulation at risk for the condition (in this case ED visit, hospitalization, or readmission) with counts generated from a negative binomial distribution and a non-susceptible subpopulation that provides the extra or excess zeros17. Stepwise variable selection was used based on statistical information criterion18. Model fit was checked using residual diagnostics and plots. All analyses were done in SAS PROC COUNTREG 9.4 (SAS Institute; http://www.sas.com).

This project was approved by the VA Central Institutional Review Board (Approval 13-22) as well as the local research and development committee. 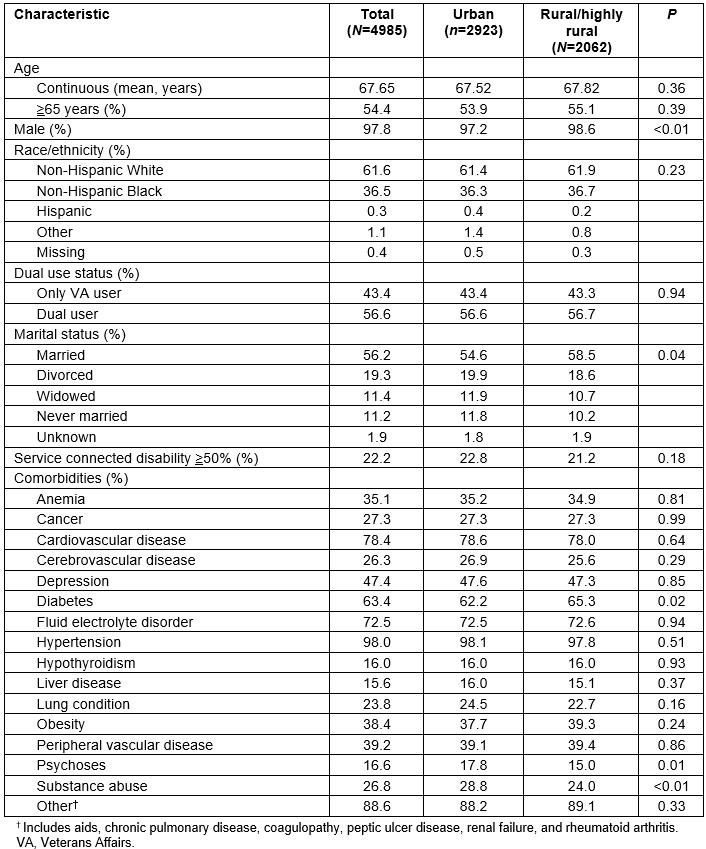 Poorer access to care may affect both VA and non-VA facilities for rural veterans with HF. With the exception for the case of all-cause ED visits, when analyzing a cohort with information on both VA and non-VA acute healthcare utilization, rural residence was not observed to significantly modify likelihood of acute healthcare utilization when comparing dual users to VA-only users. Moreover, the prevalence of dual use as defined in this study, focused on hospitalizations and ED visits, was similar in rural and urban veterans. In contrast, with respect to outpatient care, rural veterans have been observed to rely on Medicare more for primary care and on VA services for specialty and mental health care8.

Over one-third (ie 36%, 3.1 million) of veterans receiving care from the VHA live in rural or highly rural areas and often face barriers to access related to travel distance. Since 2014, the Veterans Choice Program has expanded eligibility for community care to veterans, especially for outpatient primary care and specialty care in veterans facing long wait times greater than 30 days or long travel distances greater than 64 km (40 miles). However, the Veterans Choice Program has also led to estimated increases in non-VA hospital use. West and colleagues analyzed all-payer claims data from eight states and estimated an average 8.2% increase in non-VA hospitalizations associated with Veterans Choice, with increases as high as 17–18% in states with higher proportions of rural-dwelling veterans19.

Limitations of the study include potential unmeasured differences between patient populations as well as the potential for reverse causality if veterans who utilize more health care are also more likely to be dual users. Comorbidity profiles between rural/highly rural and urban veterans were somewhat different, although these differences were accounted for in regression models. Finally, this analysis might have been strengthened through inclusion of information on the severity of HF such as New York Heart Associate class or ejection fraction, but such information was not available in the datasets examined.

Dual use appears to be a marker for higher healthcare utilization and worse outcomes for both urban and rural veterans, but rurality appears to modify the effect of dual use on rates of ED visits for HF. These findings have clinical and healthcare policy implications as VA develops interventions to address this higher risk. For example, while a wide variety of disease management programs have been developed for HF and other chronic diseases prone to acute exacerbation, few if any address receipt of cross-system care20,21. Additional attention to care coordination across healthcare systems, especially in rural patients, is warranted.

This PDF has been produced for your convenience. Always refer to the live site https://www.rrh.org.au/journal/article/4495 for the Version of Record.