Diabetes and the use of primary care provider services in rural, remote and metropolitan Australia 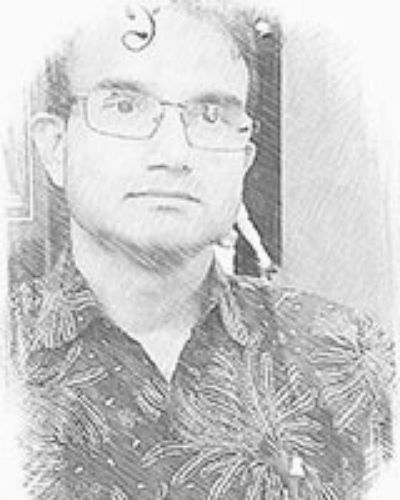 Introduction:  Public health agencies around the world are concerned about an ever-increasing burden of type 2 diabetes and related disability. Access to primary care providers (PCPs) can support early diagnosis and management. However, there is limited literature on how frequently older people with diabetes access PCPs, and their levels of access in rural Australia relative to metropolitan areas.
Methods:  In this research, patterns of PCP use among those with diagnosed diabetes and those without diagnosed diabetes (referred to as ‘healthy’ individuals) were compared using a large survey of more than 230 000 people aged 45 years and older from New South Wales, Australia. A published model to study the PCP access patterns of a group of individuals with diabetes risk was used.
Results:  Annual visits to PCPs among people aged 45 years or more with diabetes in rural areas, while higher than for healthy rural residents, were significantly lower than their metropolitan counterparts, mirroring similar disparities in PCP use across the rural–urban divide in the healthy population. Similar patterns were present in the high–risk population. Nevertheless, people with diabetes visited PCPs around four times a year, which is around the recommended number of annual visits, although some groups (eg those with comorbidities) may need more visits.
Conclusion:  Patterns of PCP use among rural residents, while significantly less frequent than their metropolitan counterparts, are at the recommended level for people with diabetes.

Primary care providers (PCPs) or general practitioners (GPs), along with other primary care practitioners such as nurses, provide the bulk of care for people with diabetes in developed countries with large rural hinterlands like the USA, Canada and Australia. A limited number of studies have investigated access to PCP services among people with diabetes in rural areas in these countries, and few have addressed how individuals at high risk of diabetes access PCP services across the rural–urban divide1.

Data were from the 45 and Up Study, a baseline survey of more than 267 112 people aged 45 years or more from New South Wales (NSW), Australia. The survey, mostly administered around 2008, by the Sax Institute, randomly sampled approximately 10.9% of the older population in NSW using the Department of Human Services enrolment database, which provides near-complete coverage of the population2. People aged 80 years or more and residents of regional and remote areas were oversampled by a factor of two. These survey data were linked by the Sax Institute using a unique Department of Human Services identifier to Medicare Benefits Schedule PCP administrative claims data (number of PCP visits made by respondents) and subset to a 6 month window before and after the survey date.

Information was obtained about each survey respondent’s postcode of residence, age, sex, country of birth, highest qualification, whether they were ever told by a doctor that they had hypertension or high cholesterol, whether they had familial heart diseases, the hours they spent sitting or sleeping, their body mass index and smoking patterns (Tables 1, 2). Diabetes status was inferred from the survey question ‘Has a doctor ever told you that you have diabetes?’, which has been previously validated against external diabetes data3. The postcode was attached to Australian Statistical Geographic Standard rurality codes, which divide the land mass of Australia into five categories with increasing degrees of rurality: metropolitan, inner regional, outer regional, remote and very remote. Of 267 112 respondents, 35 117 were missing various covariates, resulting in a sample of 231 995 (Tables 1, 2). 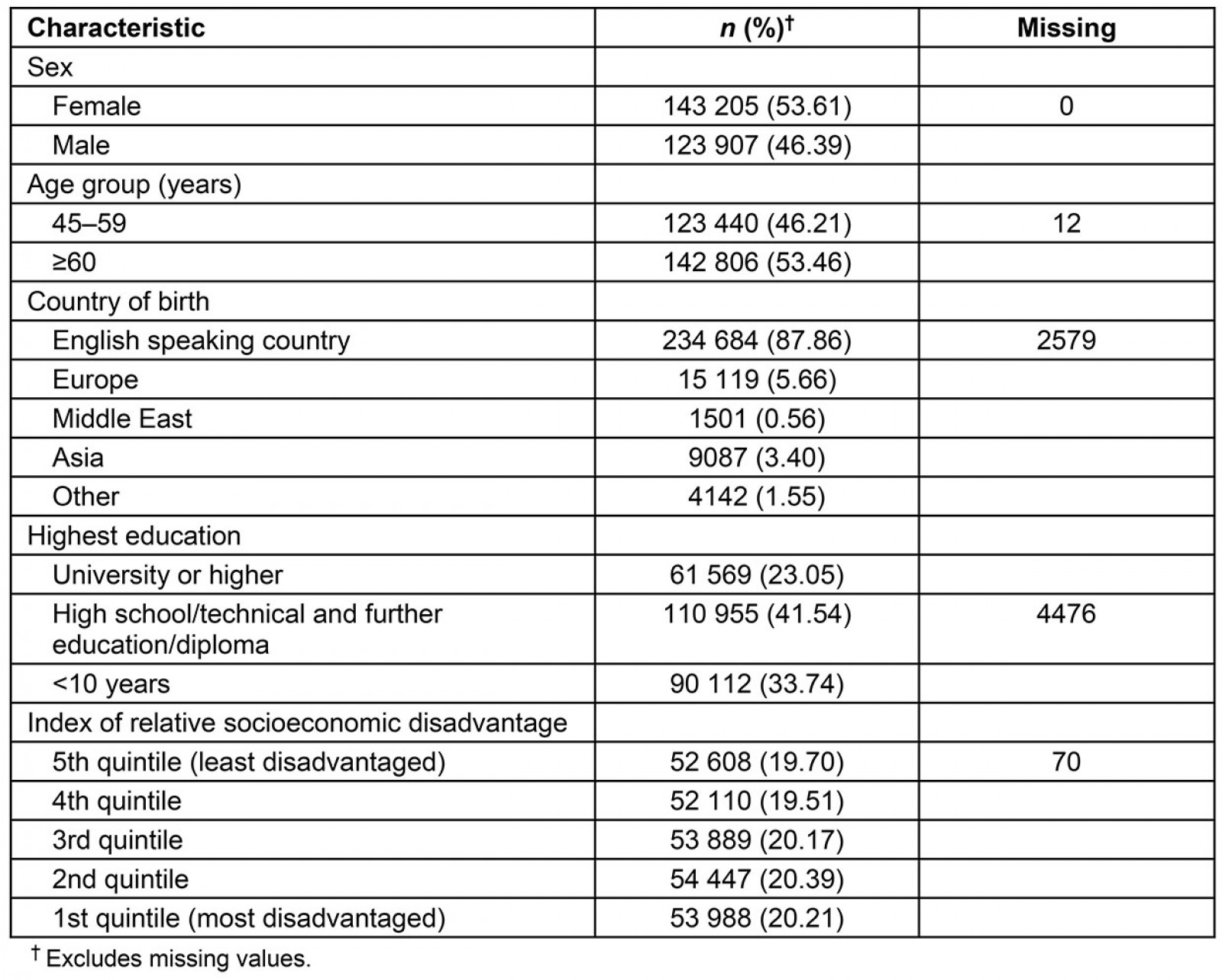 The authors tabulated the average number of PCP visits by metropolitan, regional (both inner and outer) and remote/very remote across three mutually exclusive categories: people with diabetes, healthy respondents and those with diabetes risk factors. The methods of identifying the group with risk factors of diabetes, utilising a previously published model4 are described in Appendix I. 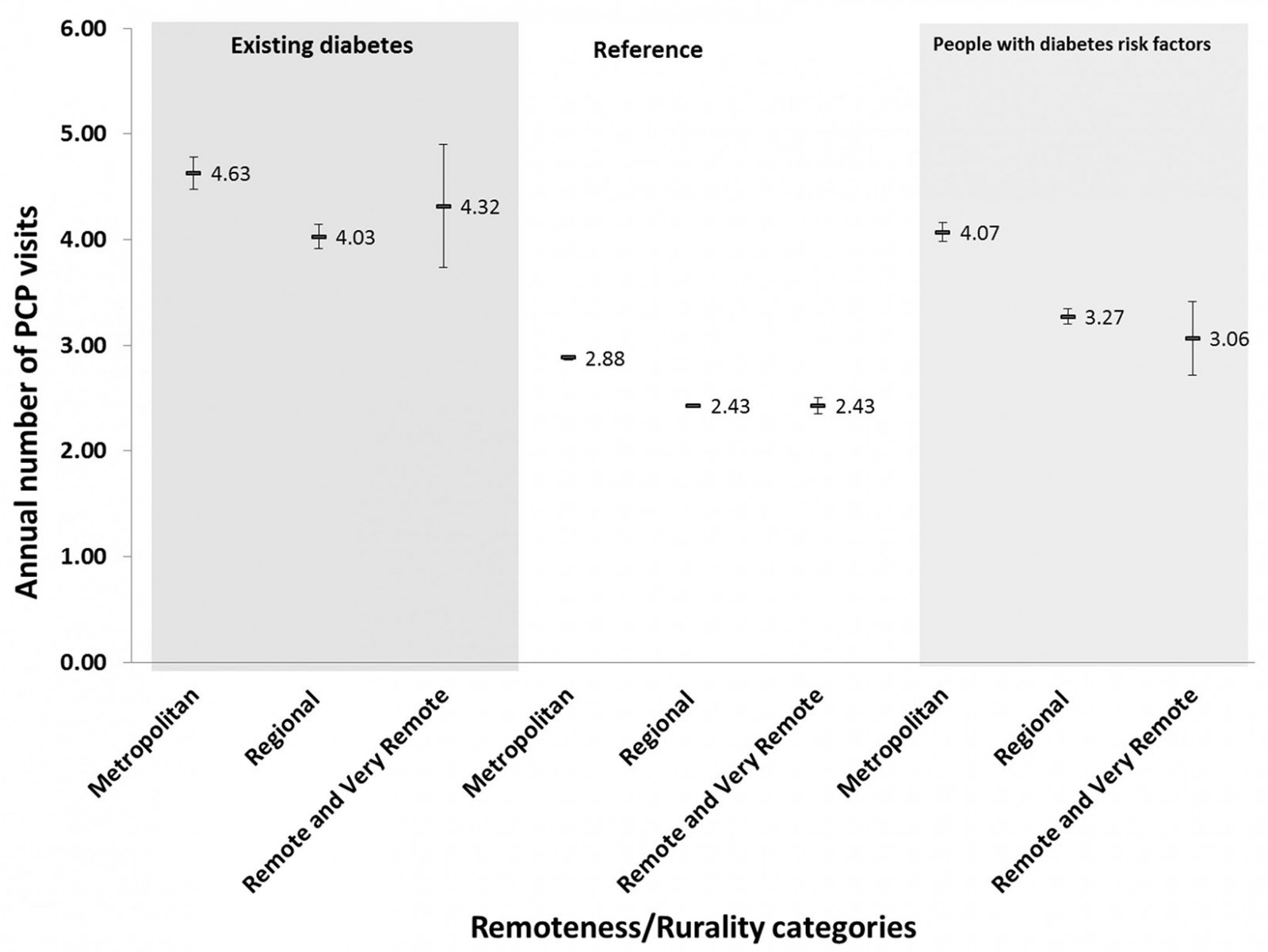 Figure 1:  Primary care provider visits among the reference population, people with diabetes and people with undiagnosed diabetes across rurality and socioeconomic gradients.

A group identified as having many of the risk factors of diabetes visited PCPs relatively often (about four visits each year). This may be because of existing illnesses – some of which (eg high blood pressure) are incorporated in the risk index, and some of which are associated with other risk factors – but again shows similar urban–rural gradient of access, with rural residents making around one fewer visit each year than their metropolitan counterparts. Thus, even if this model of diabetes risk prediction is not accurate, the fact that individuals in rural Australia may be less able to access PCP support to help in the management of their risk factors is a cause for concern.

The authors were unable to find any studies that investigated patterns of PCP use among people at risk of diabetes, but some studies have investigated patterns of PCP use among people with diabetes, reporting rates of use similar to the ones reported here. A study from the USA reported that, in 2011, approximately half of all people with diabetes had six or more office-based physician (who may include specialists) visits annually8. A study from Western Australia reported PCP usage levels among people with diabetes that range from around 2 visits in 10 months to 8 visits in 40 days9. The present results are somewhere between these extremes reported in the Western Australia study.

The strength of this study is that it utilises linked data from a large survey. A weakness of this study is that the survey did not include any clinical data, which may have been used for better risk prediction and analysis and for identifying specifically diabetes-related visits. Nevertheless, it is hoped that this study will stimulate research on PCP access for people with diabetes in rural areas with better quality data.

This research was initiated at the Australian Primary Health Care Research Institute, which was a key component of the Australian Government funded Primary Health Care Research, Evaluation and Development (2000–2014) Strategy. This research was completed using data collected through the 45 and Up Study (www.saxinstitute.org.au). The 45 and Up Study is managed by the Sax Institute in collaboration with major partner Cancer Council NSW, and partners: the National Heart Foundation of Australia (NSW Division); NSW Ministry of Health; NSW Government Family & Community Services – Ageing, Carers and the Disability Council NSW; and the Australian Red Cross Blood Service. We thank the many thousands of people participating in the 45 and Up Study.

Method of identifying a group with risk factors of diabetes 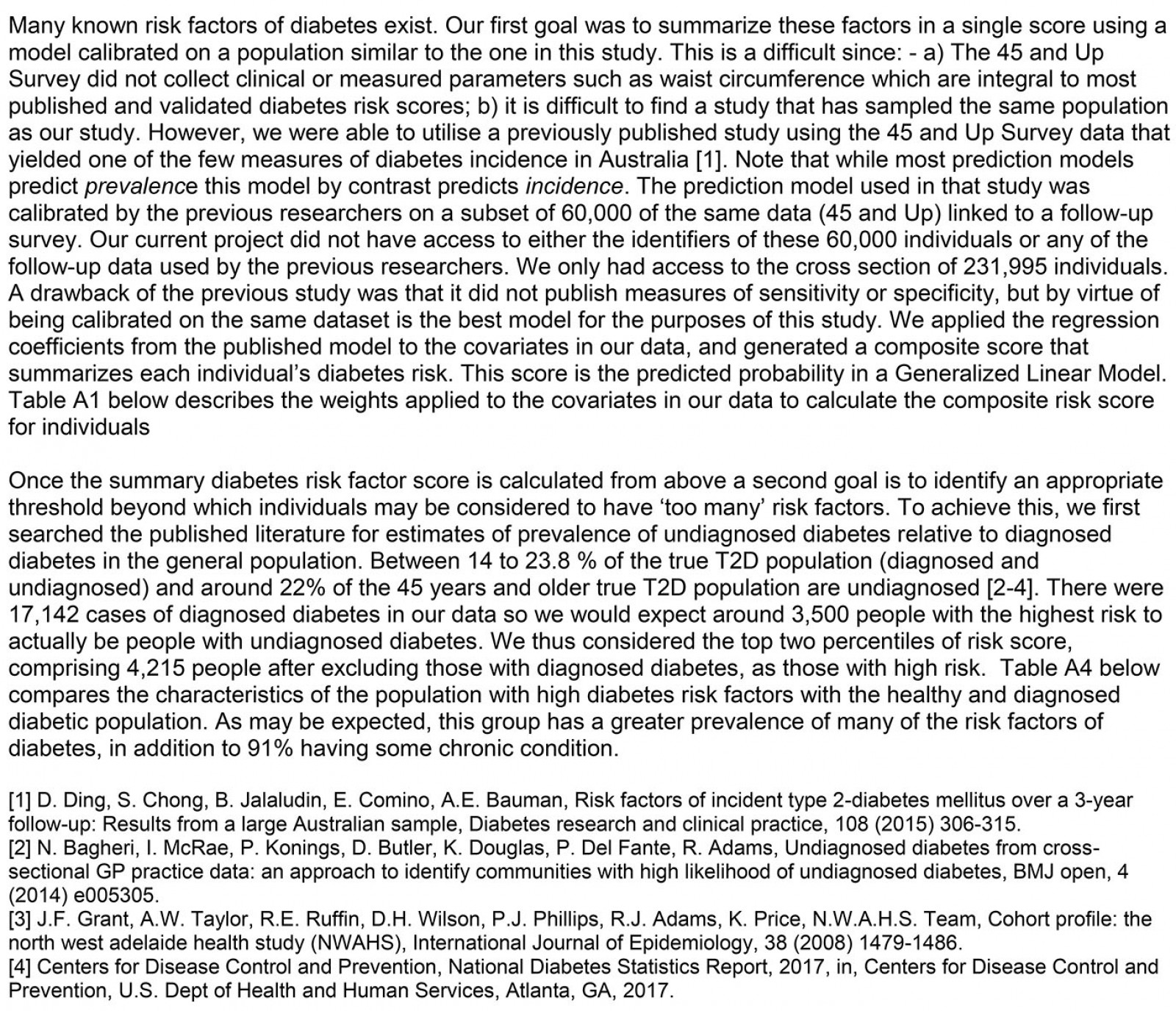 Table A1: Weights of the various risk factors of diabetes used in the model 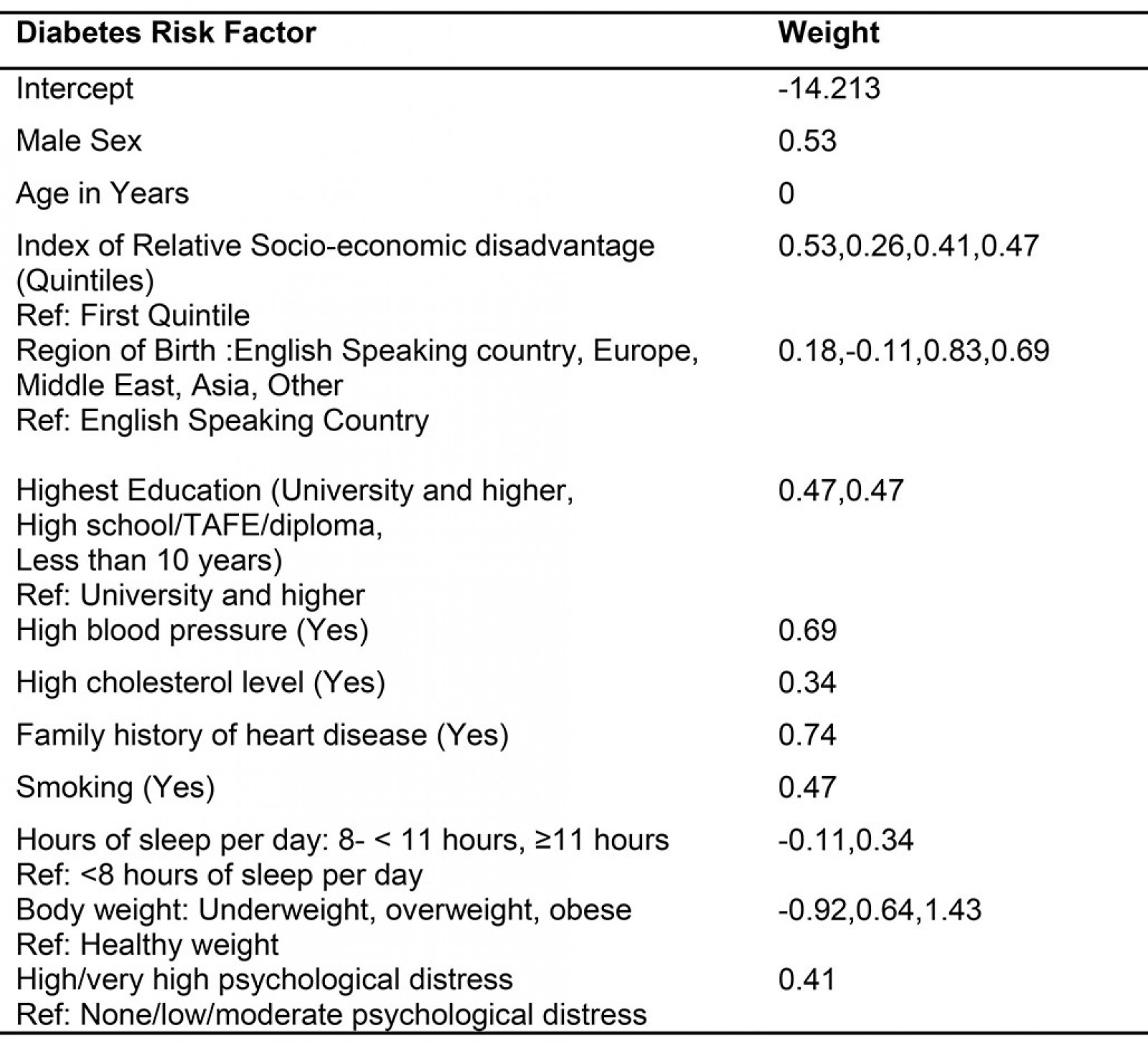 Table A2: Exploring characteristics of people with risk factors of diabetes, diagnosed diabetes and everyone else (reference)

This PDF has been produced for your convenience. Always refer to the live site https://www.rrh.org.au/journal/article/5844 for the Version of Record.