Closing the sepsis gap: an exploration of sepsis presentations at a remote north Australian emergency department 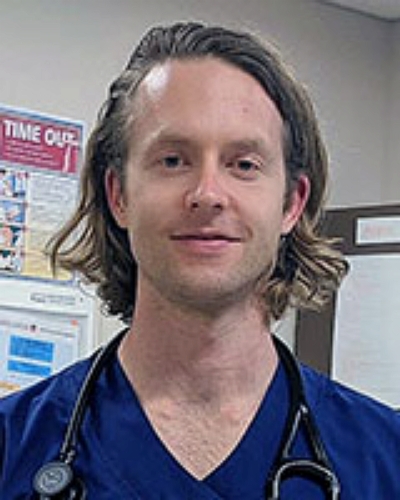 Introduction:  The objective of this study was to explore the demographic characteristics, disease specifics and outcomes of adult patients with suspected sepsis presenting to a remote Australian emergency department (ED). A retrospective, uninterrupted time series audit of ED patients presenting with suspected sepsis was conducted. A total of 189 remote presentations were reviewed based on the time of clinician identification of sepsis.
Methods:  Retrospective cohort analysis was performed for all adult patients with suspected or confirmed sepsis.
Results:  A majority of patients presenting with sepsis to a remote hospital were Indigenous (61.9%) with a large proportion (34.9%) presenting by ambulance. Median age was 50 years. Indigenous patients (44.7%, 95%CI 34.1–55.9) were more likely to meet the quick Sequential (sepsis-related) Organ Failure Assessment criteria compared to non-Indigenous patients (27.1% 95%CI 16.6–41.0) (p=0.05 95%CI –1.1–34.3) with higher rates of critical care admission (34.2% v 10.4%) (difference 23.8, p=0.003, 95%CI 7.7–37.5). Congruent with previous research, Indigenous status did not confer a difference in sepsis mortality (12.1% v 11.8%, p=0.91).
Conclusion:  Remote Indigenous patients have worse clinical sepsis scores, are more likely to present by ambulance and require skin and soft tissue source control. This cohort has higher lactate values and critical care requirements but similar mortality rates. Improving access to culturally safe medical care could address this disparity.

Sepsis is defined as life-threatening organ dysfunction caused by a dysregulated host response to infection and is a leading cause of death and hospitalisation worldwide1. Recent iterations of sepsis definitions have promulgated the quick Sequential (sepsis-related) Organ Failure Assessment (qSOFA) tool to identify patients with suspected infection at much higher risk for adverse outcomes1.

There is increasing evidence for protocolised management and outcomes from sepsis in the Australian environment including the recent Sepsis Kills program in emergency departments (EDs)2-4. There are limited data from remote and regional hospitals and, in particular, Indigenous populations5. The available evidence demonstrates increased rates of sepsis in adult Indigenous patients in northern Australia and increased intensive care (ICU) admissions for Indigenous paediatric septic patients across the country5,6.

Further research is needed to explore the epidemiology of sepsis in Indigenous populations. This knowledge could critically inform the deployment of sepsis pathways that aim to standardise interventions across the entire healthcare continuum.

The objective of this study was to examine the epidemiology and outcomes of Indigenous Australian patients with sepsis presenting to a remote ED in Western Australia (SA).

The Audit of Sepsis in Hedland (ASH-remote) study is a retrospective, uninterrupted time series audit analysis.

The Hedland Health Campus (HHC) is a remote hospital, treating approximately 28 000 annual ED presentations, with general inpatient and high-dependency units. The centre is 1636 km by road or a 120-minute commercial flight to the nearest tertiary hospital in Perth, WA. The HHC services a regional Pilbara population of 66 000, of whom 12% identify as Aboriginal and/or Torres Strait islander7.

The study aimed to assess the epidemiology, management and health system implications for septic patients in the Pilbara region. De-identified, secured data were extracted from the WA Health patient administration systems (PAS) and sorted by clinical coding characteristics.

The study population included all adult patients presenting to the HHC ED between 1 January 2010 and 31 December 2016 with clinician-diagnosed sepsis. Demographic, physiological, pathological and treatment data were collected using manual case review and clinical reporting systems. The data included a review of the self-identification of Aboriginal and Torres Strait Islander (Indigenous) status. Incoming aeromedical retrievals with an existing diagnosis of sepsis and any patient under the age of 16 years were excluded from analysis.

A retrospective cohort analysis was performed by the authors for all patients of 16 years or more with suspected or confirmed sepsis based on locally applied SIRS screening algorithms and clinician gestalt. Statistical software (MedCalc v18; http://www.medcalc.org) was used for the analysis. Tests for normality were conducted on all variables, and medians and interquartile ranges are reported for variables with non-normal distribution.

Patients presenting to a remote ED with clinician-diagnosed sepsis (n=189) had a median age of 50.5 years. This was anecdotally younger than in the broader Australian context. An Indigenous subcohort was non-significantly younger (median 48.0 years v 59.5 years; interquartile range 45.0–68.0, p=0.12) (Table 1). 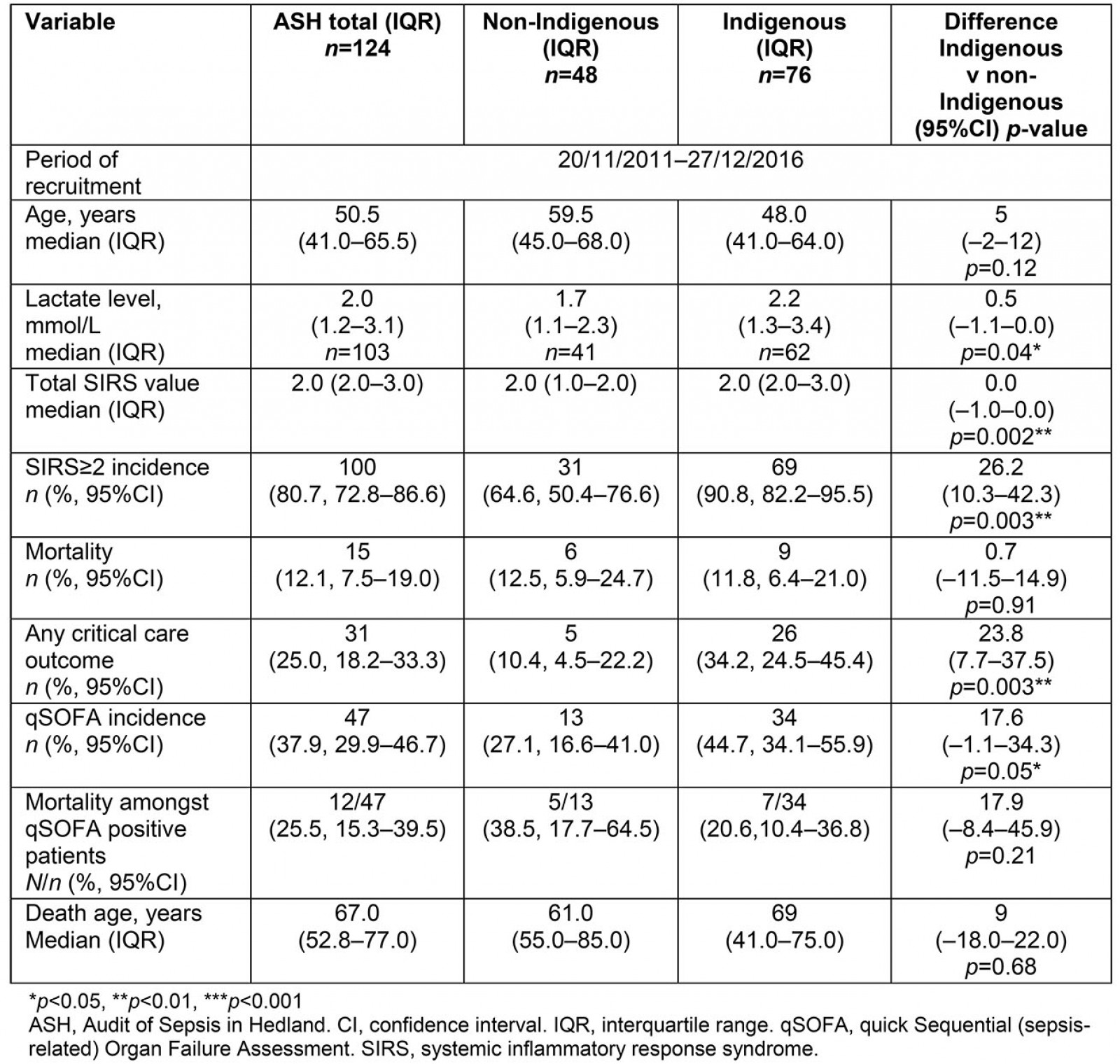 Clinical severity:  80.7% of patients were likely to meet two or more SIRS criteria and 37.9% of these had qSOFA scores ≥2. Although a soft biomarker for severity, lactate levels were higher for Indigenous patients (2.2 v 1.7 mmol/L). Indigenous patients had higher clinical sepsis scores evidenced by both surrogate markers (SIRS≥2 and qSOFA≥2) (Table 1). 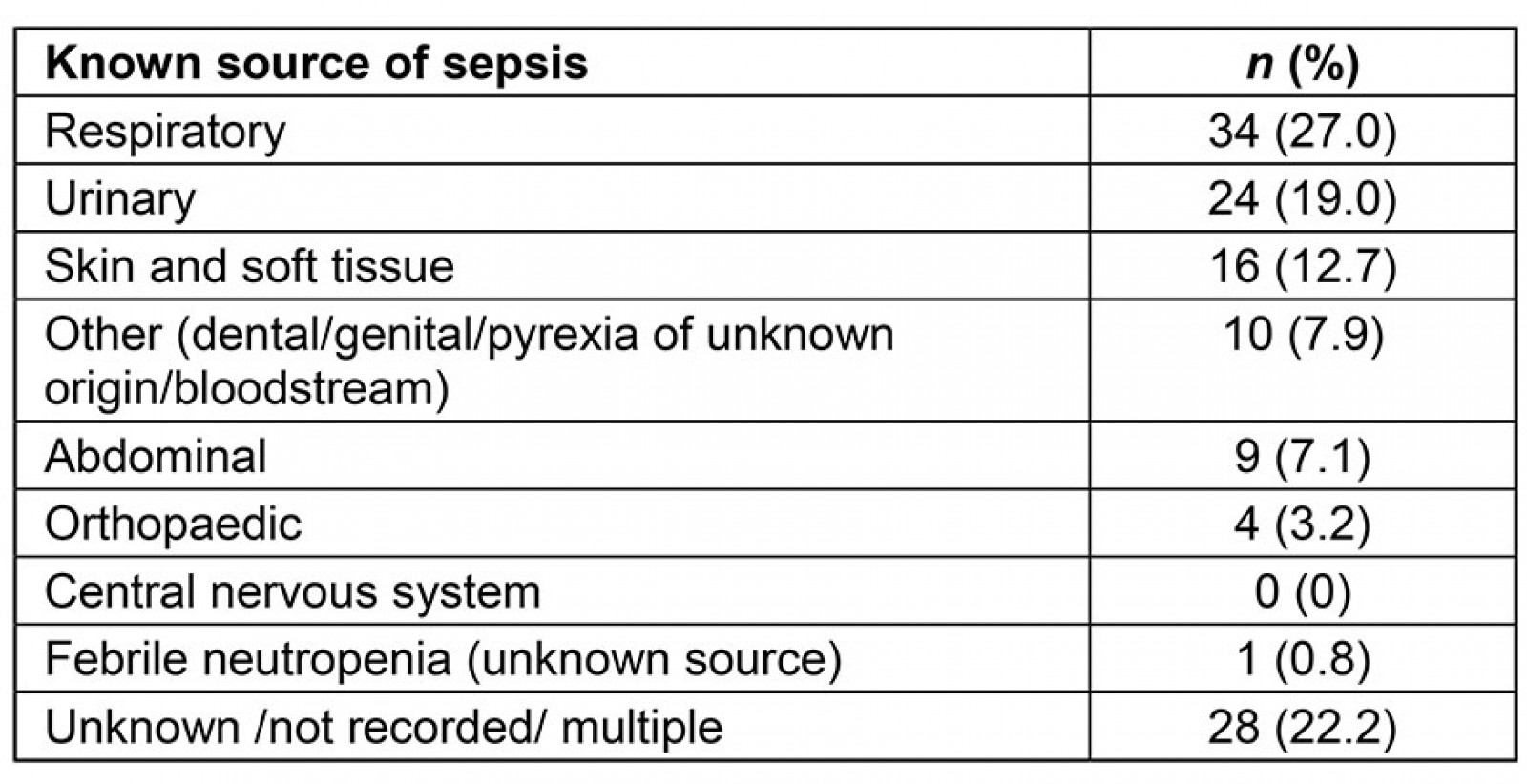 This research describes a patient cohort presenting to a remote Australian ED with suspected sepsis. Indigenous patients had higher ambulance utilisation than non-Indigenous patients and required higher rates of invasive critical care (ICU/HDU) interventions. Despite significant differences in presenting illness, severity mortality rates were similar. This difference could reflect a younger average age of patients in the Indigenous subcohort, but needs to be further investigated.

Possible contributing barriers to hospital presentation include multigenerational trauma, institutionalised racism and reduced trust in healthcare services8. Due to the wide range of potential sources of sepsis, a whole-of-health approach addressing the social determinants of health may help reduce the elevated burden of communicable disease in Indigenous populations6,9.

This research identified skin, soft tissue and orthopaedic infections as being overly represented sources of sepsis in remote Indigenous populations. Data from the national Australian and New Zealand Paediatric Intensive Care registry confirms that Staphylococcus aureus was the leading pathogen identified in Indigenous children with sepsis3. It is the authors’ view that skin and soft tissue infection interventions suggested in the 2018 National Healthy Skin Guideline10 could reduce the disease burden of sepsis in remote Indigenous populations.

Despite the small sample size, findings suggest a ‘sepsis gap’ where remote Indigenous patients have greater sepsis clinical presentation scores and a younger median age, but no difference in short-term mortality rates.

This research is limited by the small sample size and lack of direct comparison data. This study does not capture mortality from sepsis in the community and long-term post-sepsis patient outcomes, which may be significant in a remote setting.

Further work is needed to understand the biochemical and physiological manifestations of organ dysfunction in remote populations. Age-related immune-response markers are recognised in broader population groups5 but not well understood in Indigenous Australians, where there are known genetic differences in metabolic regulation11. The impact of comorbidities on adverse outcomes in remote septic patients was also not studied. Future investigations should use APACHE scoring to investigate the impact of pre-morbid function on mortality rates and critical care admission. Longitudinal, culturally appropriate patient-reported outcomes would help understand the patient experience.

This study’s data demonstrate that remote Indigenous patients with clinician-diagnosed sepsis score highly when SIRS or qSOFA based screening criteria are used. This cohort is therefore likely to be identified and escalated by current sepsis pathways. To provide timely and effective care, there is a need for future sepsis assessment tools, biomarkers and pathways relevant to remote cohorts.

To prevent delayed access to ED care it is the authors’ opinion that health agencies should educate community providers and first responders to communicate in local languages on how to identify sepsis and early source control of common infections. In light of this study’s findings, the effectiveness of current SIRS-based escalation processes for remote septic patients is unclear as differences in outcome do not appear to be based purely on clinical severity scoring. Closing any gaps will require a structured and coordinated approach improving trust and access to culturally safe health care (Table 3).

There is a high sepsis burden in patients presenting to remote EDs. This small, early-data study suggests that Indigenous cohorts present with worse clinical sepsis scores than non-Indigenous patients and are regarded as ‘sepsis positive’ by standardised clinical management pathways. They are more likely to present by ambulance, require skin and soft tissue source control, have higher qSOFA scores, lactate values and increased critical care requirements, but similar mortality rates. Further study is needed to assess the health system factors responsible for this ‘sepsis gap’ in order to build trust and access to culturally safe health care for all Australians.

The authors would like to formally acknowledge the participation and support of the Traditional Owners of the Port Hedland area: the Kariyarra, Ngarla and Njamal people. We acknowledge the Traditional Owners of country throughout Australia and recognise their continuing connection to land, waters and culture. We pay our respects to their Elders past, present and emerging on whose land this research has been respectfully conducted. The terms ‘Indigenous’ and ‘male’ have been used in this article but the authors acknowledge there are not necessarily unanimously agreed identifiers for all people. The authors acknowledge clerical and clinical staff members at the Hedland Health Campus for facilitating data collection.

This PDF has been produced for your convenience. Always refer to the live site https://www.rrh.org.au/journal/article/5979 for the Version of Record.