Beliefs about cancer causation in Samoa: results from an awareness campaign recall survey 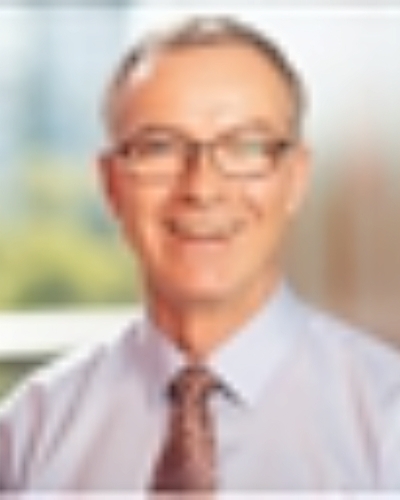 Introduction:  Cancer is a leading cause of death in Samoa. Cultural beliefs shape attitudes towards disease and disease prevention in Pacific countries, and are a barrier to engaging in cancer screening services.
Methods:  A survey of 205 Samoan adults conducted as part of the evaluation of the first cancer awareness campaign implemented in Samoa explored beliefs about cancer causation.
Results:  Lifestyle factors associated with a departure from fa’aSamoa (traditional lifestyle) were most commonly cited as causing cancer. Cancer was also attributed to pathogens and person-to-person transmission, and, to a lesser extent, cultural beliefs including supernatural agency (spirits, God).
Conclusion:  Addressing misconceptions while integrating certain aspects of fa’aSamoa into cancer control strategies could support greater engagement in health promotion practices and screening initiatives.

Cancer is a leading cause of death in Pacific Island nations, including Samoa1. Pacific nations are experiencing a double burden of infection-related, and lifestyle and reproductive, cancers1, with cancer incidence predicted to increase as a result of ageing populations and increasing obesity levels2. Samoa has estimated age-standardised cancer incidence rates of 202 and 218 per 100 000, and mortality rates of 126 and 112 per 100 000, for males and females respectively2. The relatively low incidence figures – in comparison, the cancer incidence rates in Australia are 525 and 443 per 100 000 for males and females respectively3 – are likely to be an underestimate due to the absence of robust cancer surveillance systems2. The high prevalence of risk factors such as obesity (45% and 69% for males and females respectively) and smoking (37% and 14%), together with the lack of screening programs, suggests that the cancer burden in Samoa will continue to increase, putting pressure on already constrained resources2.

Traditional beliefs have an important role in shaping attitudes towards health and disease causation in Polynesian culture5. Research conducted with American Samoans and Samoans living in the USA found that cancer is not perceived as a Samoan illness but, rather, a palagi (westerner) disease, and that abandoning the traditional lifestyle (fa’aSamoa) could lead to cancer6. Other research involving similar populations found that there was a belief that cancer could be caused by spirits or was a punishment from God7. Furthermore, disease prevention is not seen as an integral part of fa’aSamoa8, and other factors such as modesty and fear9,10 may inhibit cancer prevention practices and participation in screening programs8-10. The authors found no published evidence exploring beliefs about cancer in Samoa.

This article presents results on beliefs about cancer causation from a campaign recall survey conducted as part of the evaluation of the first cancer early detection campaign implemented in Samoa.

The campaign was implemented by the Samoa Cancer Society from February 2017 until April 2018. A campaign recall survey was administered in May 2018 to a convenience sample of Samoans aged 18 years and over. Participants were recruited at various locations in Apia (the capital city located on the island of Upolu) to achieve a broad representation in terms of gender and age.

Two trained research assistants fluent in Samoan and English administered the paper-based survey in Samoan. The instrument collected basic demographic information and consisted of brief unprompted questions about the campaign and its messaging, using dichotomous (yes/no) and Likert-scale response options, and one open-ended question on cancer causation: ‘Why do you think Samoans get cancer?’. Responses, including the literal transcription of the responses to the open question, were recorded by the research assistants in writing.

Responses to the open-ended question were subjected to qualitative content analysis, adopting a summative approach consisting of identifying and tabulating topics and categories, and are the subject of this article.

Results presented here were part of the evaluation of an awareness campaign conducted by the SCS. Senior SCS staff consulted the existing Ethics Committees (Samoa's Ministry of Health and the National University of Samoa). SCS was advised that the conduct of the recall survey fell outside of the scope of either ethics committee. Furthermore, the broader project (awareness campaign) was reviewed by Griffith University's Human Research Ethics Committee, and it was determined that the project required no ethics approval/was out of scope. The conduct of the project was considered by senior SCS staff, including ethical conduct of research and voluntary participation. The study was conducted in accordance with accepted ethical human research standards.

A total of 205 respondents took part in the survey. As shown in Table 1, males and females were almost equally represented, and the sample included respondents across all age groups and from more than 100 villages, including 17 participants from Savai’i (the larger but significantly less populated of the two main islands of Samoa).

As shown in Table 2, lifestyle factors were the most frequently cited cause of cancer (n=190); among these, unhealthy food (including cheap, imported food) was the most frequently cited (n=76), followed by tobacco smoking (n=57) and alcohol consumption (n=19). Lack of self-care or ‘carelessness’ was also mentioned (n=15), followed by references to changing or new lifestyles (n=12), and lack of exercise (n=11).

Some participants regarded cancer as a communicable disease (n=37). Within this category, sexual intercourse was the most frequently cited cause (n=18), followed by germs and viruses (n=10), and poor hygiene practices (n=5). Not washing hands after going to the toilet was given as an example of poor hygiene that might lead to cancer, as was, in the case of breast cancer, women not washing their breasts after sweating. There were also generic references to cancer as a ‘disease that people get from others’ (n=4).

Cancer was also attributed to internal factors (n=20), such as the belief that cancer is the result of a curse (n=6), shame or fear to see a doctor (n=6), abandoning religion/God (n=3), and stress (n=2). With regards to beliefs about traditional healing (n=3), one respondent directly linked cancer to seeking the advice of traditional healers, and another respondent who came from a family of taulasea (traditional healers) believed that cancer is ‘worse when seeing a doctor’; another said that, because cancer is the result of a curse, people should have Samoan traditional massage (f%u014Df%u014D) instead of seeking Western medicine.

Environmental factors (n=12) and lack of prevention and education (n=10) were also cited, and there were references to genetic factors (n=8), which respondents articulated as ‘natural’ causes (‘some are born with it and it is detected later’, ‘cancer is spread in the family’). References to other causes included exposure to substances (pesticides, make-up) and certain behaviours (substance abuse, failing to breastfeed, ‘keeping your mobile phone in your bra’). 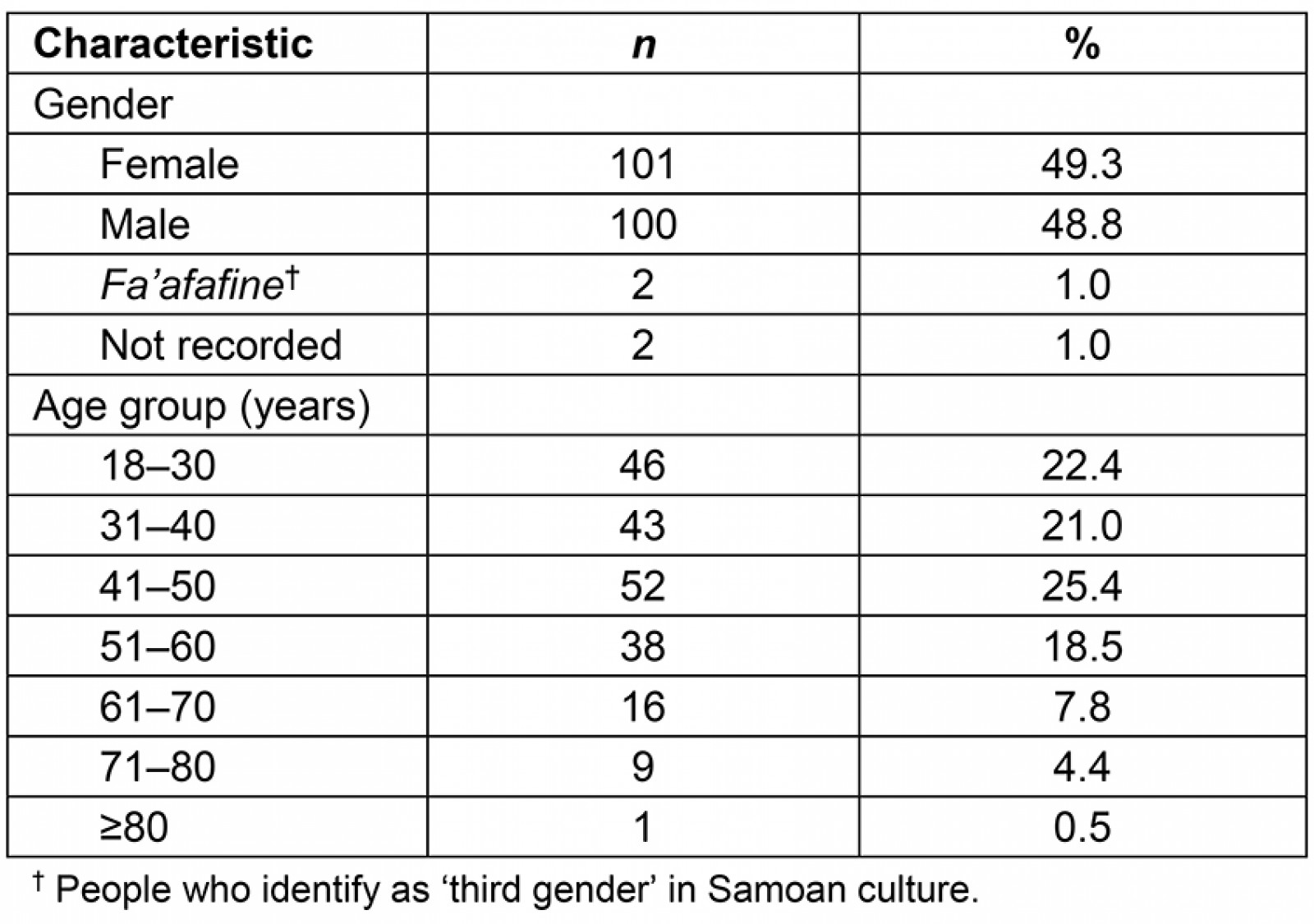 Table 2:  Beliefs about cancer causation – tabulation of topics and categories (number of mentions) 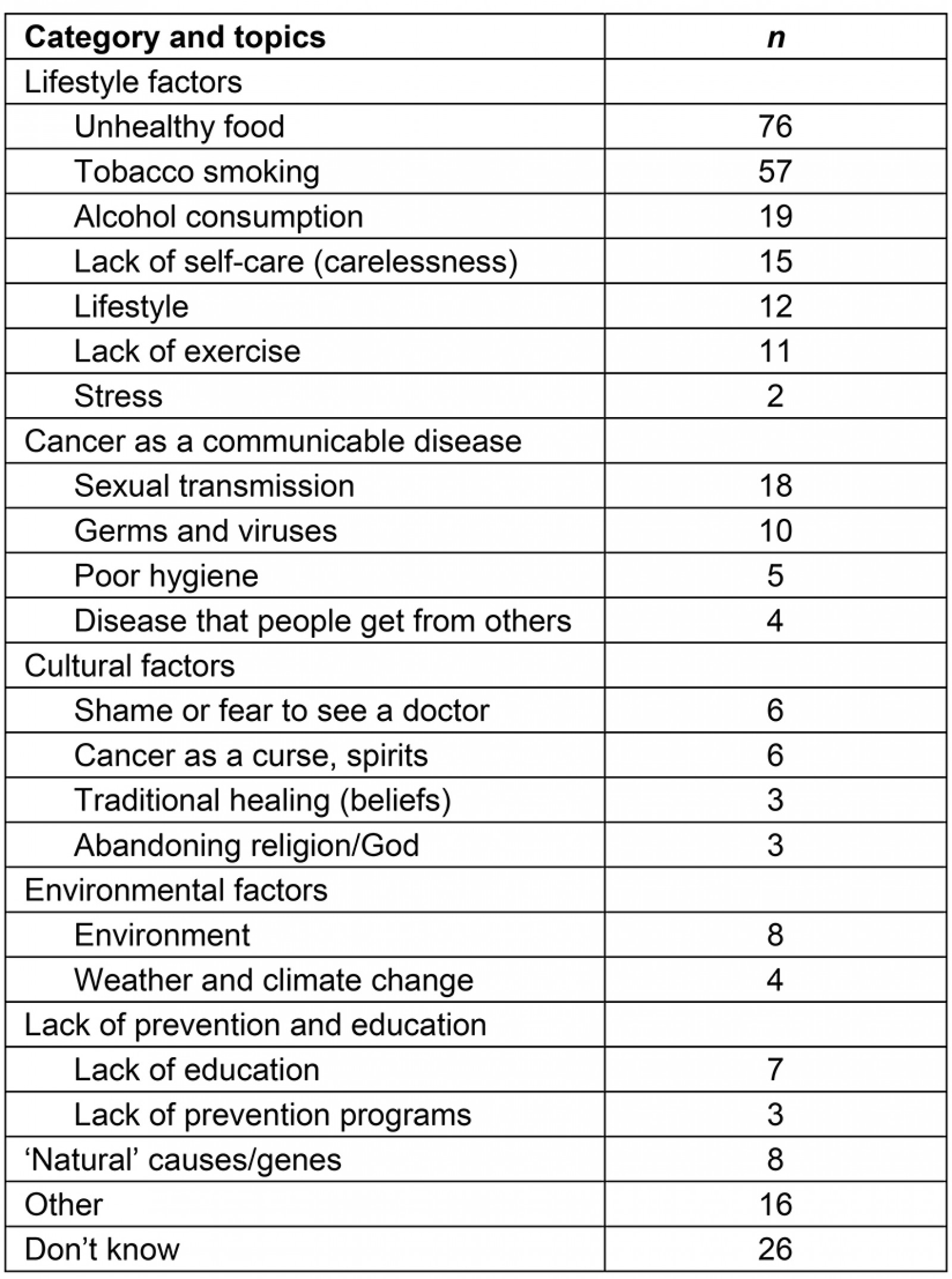 Cancer was predominantly attributed to lifestyle factors associated with a shift from a traditional to a Western lifestyle, especially the adoption of unhealthy food and tobacco smoking, as well as ‘carelessness’ or lack of self-care. These findings are consistent with previous research6,8 and confirm the central role of fa’aSamoa in shaping beliefs about cancer causation and, more broadly, health and wellbeing.

The notion of cancer as a communicable disease has not, to the authors’ knowledge, been explored in the literature on cancer beliefs among Samoan populations. This finding has significant implications for future cancer education campaigns. Given that Pacific island nations face a double burden of infection- and lifestyle-related cancers1,  addressing misconceptions on causation while increasing awareness of the role of viral infections in the development of certain cancers (eg cervical cancer) is urgently needed.

The present study’s results relating to cultural factors confirm the strong cultural context of health and beliefs about disease causation in Pacific populations5, and support the need to raise awareness about cancer causation in the community. The present results on the attribution of cancer to spirits or abandoning God or religion are consistent with previous research7, confirming that beliefs about supernatural causation remain in the community. Although strictly speaking unrelated to cancer causation, the data on shame and fear are consistent with other research exploring attitudes towards cancer screening8,9 and are important in understanding late presentation.

Overall, these results confirm the strong cultural context of health and beliefs about disease causation in Samoa5. The results support the need to address knowledge gaps and misperceptions around cancer in the context of Samoan cultural norms and practices, recognising the influence of family, chiefs and church leaders in fa’aSamoa8 and engaging with traditional healers11.

The study data emanates from a brief cross-sectional survey of a small convenience sample (n=205) that might not be representative of the general population. Logistical reasons precluded recruitment outside the capital, Apia; however, the survey achieved good geographical representation. Despite these limitations, these results contribute towards filling an evidence gap and suggest the existence of pluralist beliefs among the Samoan population, with traditional beliefs coexisting with Western understandings5.

As Samoa faces the challenge of a growing cancer burden, cancer awareness, prevention and early detection initiatives should address knowledge gaps and persisting community misconceptions, while harnessing the health-promoting aspects of fa’aSamoa. This will result in greater engagement in health promotion practices and screening initiatives and, ultimately, better health outcomes.

The authors would like to acknowledge Ms Tiana Silipa Levao, Community Education and Media Officer at the SCS, and Ms Gardenia Betham, who administered the survey. The authors would also like to thank and acknowledge all survey participants. Beatriz Cuesta-Briand's work with the Samoa Cancer Society was funded by the Australian Government under the Department of Foreign Affairs and Trade's Australian Volunteers Program.

This PDF has been produced for your convenience. Always refer to the live site https://www.rrh.org.au/journal/article/6118 for the Version of Record.