A cautionary tale of hyperbilirubinaemia in subhepatic appendicitis

Subhepatic appendicitis is rare in children and often presents with atypical symptoms and signs, resulting in delayed diagnosis with attendant complications. The presence of hyperbilirubinemia could be a marker of complicated appendicitis and may assist rural physicians to seek specialist assistance early.

Complicated appendicitis poses a diagnostic challenge in clinical practice, especially in rural centres with limited access to subspecialists and imaging facilities. Inflammation of the appendix located in an unusual position can be challenging to diagnose due to atypical clinical presentations. We discuss a case of a perforated appendix considered in the context of hyperbilirubinemia that facilitated prompt surgical management after appropriate imaging.

A previously healthy boy aged 9 years presented to the Mackay Base Hospital Emergency Department in Queensland, Australia, in May 2019 with severe abdominal pain, non-bilious vomiting and fever preceded by a history of nonspecific abdominal pain for 2 days. He appeared unwell, preferring to avoid any body movements, was jaundiced, had non-specific tenderness of the right side of the abdomen with abdominal guarding and absence of bowel sounds.

Considering the severity of symptoms and the presence of possible peritonitis, a CT scan of the abdomen and pelvis was performed. The scan showed a markedly thickened, hypoechoic tubular structure medial to the inferior edge of the liver, located retrocaecally (Fig1). The adjacent small bowel loops, hepatic flexure and caecum were thickened (Fig2). The CT scan also demonstrated localised extraluminal gas in the subhepatic region, consistent with perforation. An emergency laparotomy revealed a perforated, gangrenous appendix. The patient’s recovery period was uneventful, and he was discharged on the fourth day after surgery. 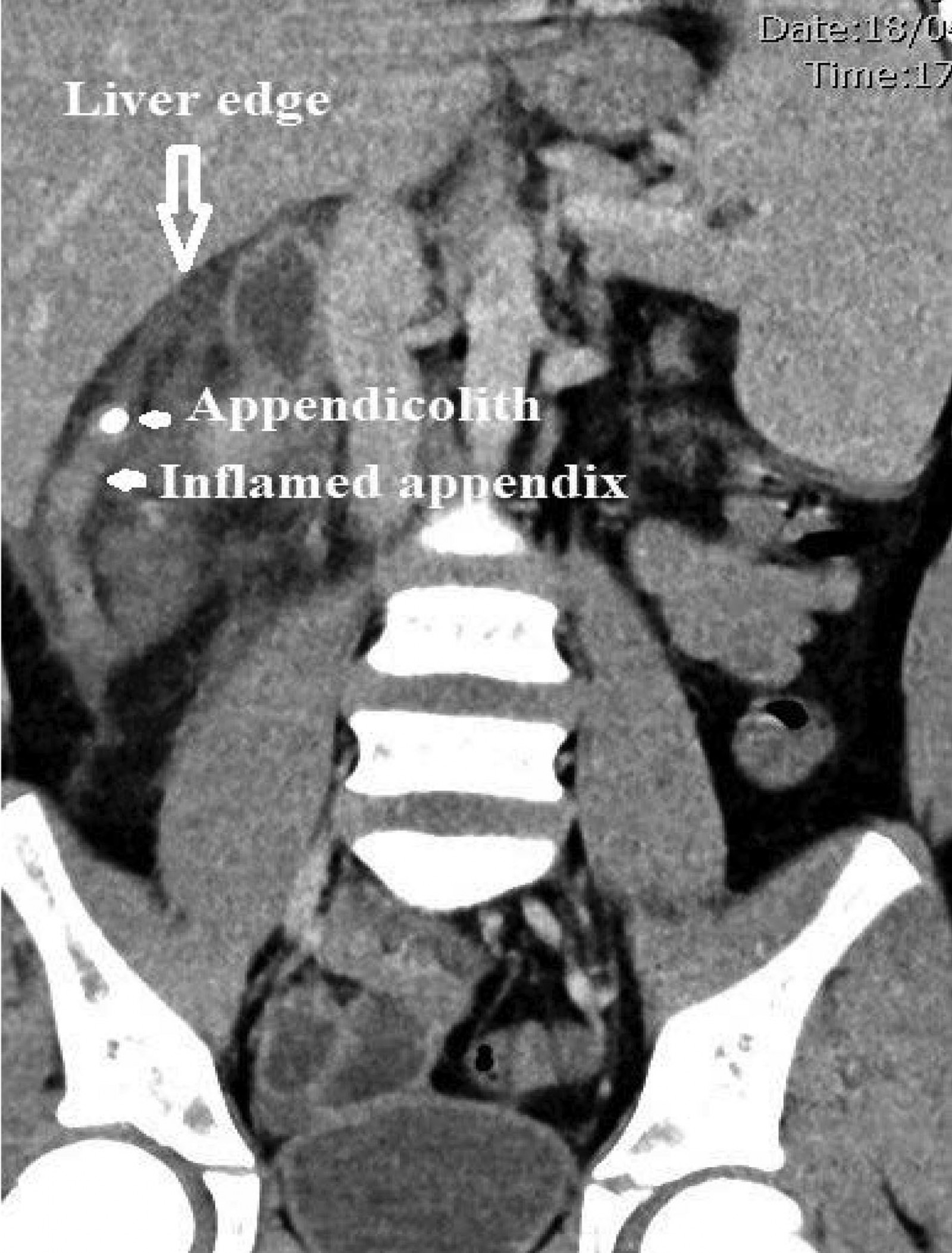 Figure 1:  CT scan showing inflamed appendix in subhepatic location with an appendicolith close to the tip. 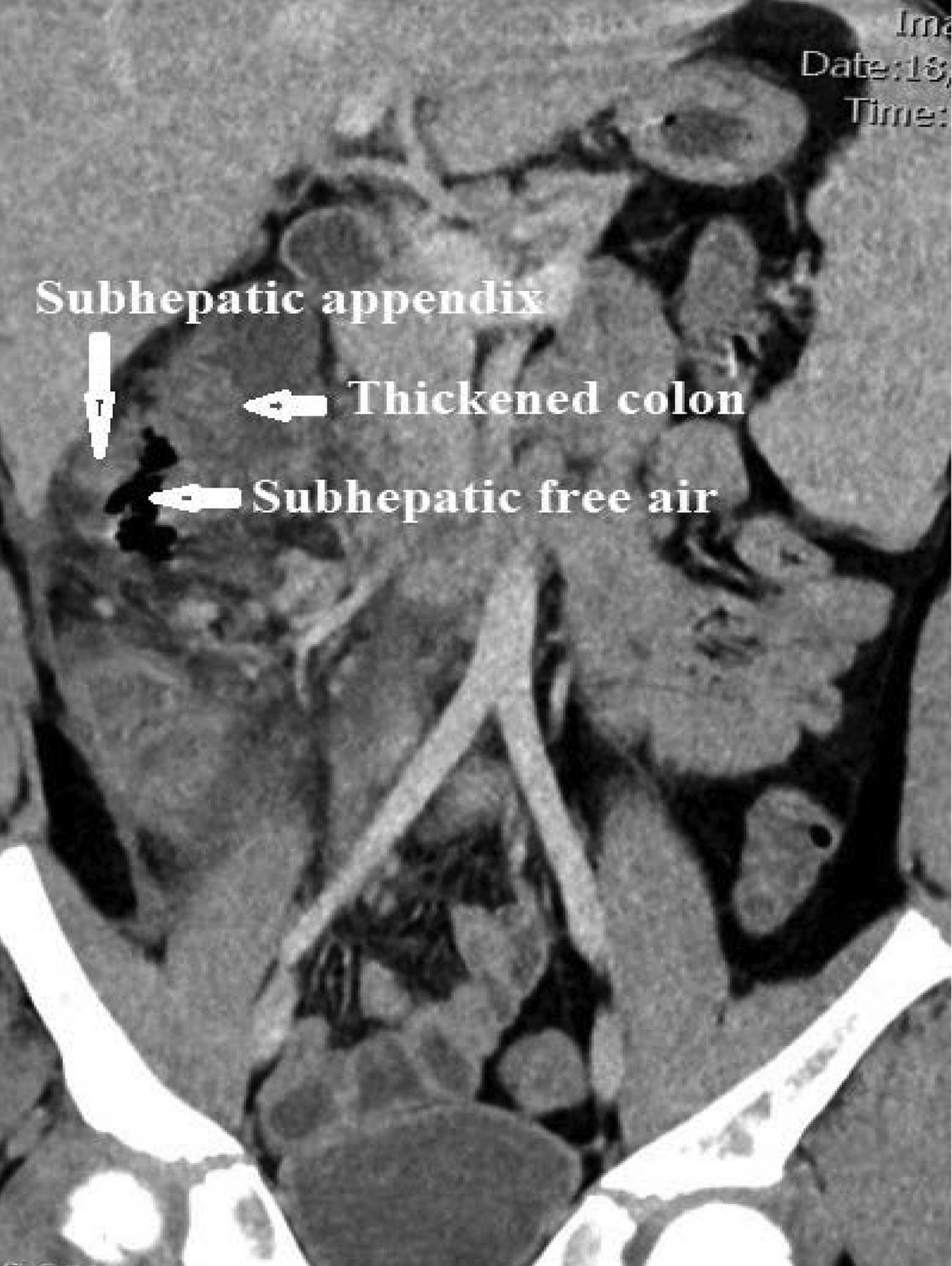 Acute appendicitis is the most common cause of surgical emergencies. The typical clinical presentation of acute appendicitis includes acute-onset abdominal pain, vomiting, fever and tenderness in the right iliac fossa. A rebound tenderness would suggest localised peritonitis, but this sign may be absent when the appendix is in an unusual position, such as subhepatic location.

In this case, the appendix was retrocaecal and subhepatic, which is rare and associated with non-specific clinical signs that may mimic upper abdominal pathology1. The subhepatic position of the appendix is often a result of the incomplete rotation of the foetal foregut and maldescent of the caecum2. The differential diagnoses considered in this case were acute appendicitis, cholecystitis, hepatitis, hepatic abscess, pancreatitis and pyelonephritis.

The inflammation of appendicitis could be substantiated by blood tests indicating leucocytosis, neutrophilia and raised C-reactive protein. These are sensitive but not specific tests. Ultrasound avoids radiation risk and is a valuable investigation in suspected appendicitis, but difficulties are encountered in an abnormally positioned appendix (retrocaecal or subhepatic), bowel gas obscuring intrabdominal structures and severe tenderness limiting successful completion of the study. In these cases, a CT scan would help provide an accurate diagnosis.

The challenges in treating appendicitis involve decisions regarding managing the case conservatively, operating based on clinical grounds, or performing further imaging such as a CT scan to confirm the diagnosis. The variability of clinical features and absence of specific markers make the diagnosis of acute appendicitis challenging. Appendicitis, complicated by perforation, could lead to life-threatening complications, and therefore an early diagnosis is paramount. Surgery based on clinical findings alone has been noted to be associated with high appendix removal rates, and therefore an increasing emphasis is placed on combining blood and imaging results.

Markedly elevated serum bilirubin (both unconjugated and conjugated) has been reported in cases of acute appendicitis, but is more specific for perforated appendicitis3. Bakshi and Mandal concluded from their small cohort (35 patients) that raised bilirubin could aid in early diagnosis of complicated appendicitis, after noting elevated levels in 91.4% cases4. In similar cases, the liver enzymes (AST and ALT) are reported to be only mildly elevated5.

Increased bilirubin production has been postulated to be a response to the oxidative stress from inflammation, owing to the antioxidant scavenging activity of bilirubin6. Mucosal oedema and swelling in appendicitis can progress to ischaemia, leading to gangrene and perforation of the appendix. The cytokines released in the inflammatory process are known to translocate through the intestinal walls to the portal venous system and lead to liver inflammation and cholestasis, causing hyperbilirubinaemia and elevated liver enzymes in some cases7.

The degree of the rise of total serum bilirubin has been predicted to be associated with greater severity of appendicitis and complications. Nomura et al reported a more significant elevation of total serum bilirubin preoperatively associated with higher preoperative body temperatures, a greater elevation of white cell count and C-reactive protein, higher probability of gangrenous appendix (odds ratio 1.7), pronounced inflammation of the appendix and increased risk of postoperative complications8. Total serum bilirubin returned to normal after surgery, probably due to the resolution of inflammation.

CT scans deliver a relatively large radiation dose and therefore should be used judiciously9. Furthermore, CT scans, especially after hours, may be lacking in regional and rural centres, where decisions will need to be made based on clinical findings and blood tests. In cases where the clinical picture and blood markers (elevated bilirubin and other inflammatory markers) suggest an increased risk of complications, a transfer to a specialist centre with specialist surgical facilities could be advocated from rural or regional centres.

Arriving at a clinical diagnosis of appendicitis, especially for an appendix in an unusual position such as subhepatic, can be challenging10. An early diagnosis of a perforated appendix is essential to reduce morbidity. In this regard, although elevated serum bilirubin is not diagnostic, it is a cheap and readily available test to substantiate a probable diagnosis of complicated (perforated or gangrenous) appendicitis that would facilitate timely surgery. Large, prospective studies are needed to evaluate the usefulness of measuring bilirubin and probably incorporation into a scoring system to predict complicated appendicitis.

Subhepatic appendicitis is rare, has an atypical clinical presentation and may not be amenable to diagnosis by ultrasound. Hyperbilirubinaemia could suggest an increased probability of perforation in acute appendicitis. Clinical judgement with a rational interpretation of blood investigations (combining hyperbilirubinaemia and elevated blood inflammatory markers) and appropriate imaging could help timely surgical intervention.

This PDF has been produced for your convenience. Always refer to the live site https://www.rrh.org.au/journal/article/6498 for the Version of Record.