Is walking barefoot a risk factor for diabetic foot disease in developing countries? 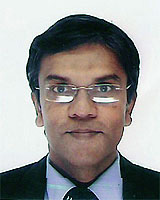 Diabetic foot disease is a common complication of diabetes. The life-time risk of a diabetic developing foot ulcers is approximately 15%1. The annual incidence of new ulcers in type 2 diabetics ranges between 2.2% and 3.6% and is as high as 7.2% in those with neuropathy2,3. Developing countries which have large rural populations and more than 50% of the estimated 194 million diabetics worldwide, face an increasing health burden from diabetic foot disease.

Many persons in poorer warm countries or regions rarely use footwear, especially in rural and remote locations4. However, walking barefoot as a risk factor for diabetic foot disease is rarely documented in the literature. The objectives of this study were twofold: to describe the association between diabetic foot disease and walking barefoot; and to compare the footwear habits of diabetics and non-diabetics.

The first study was on 75 consecutive diabetics who were admitted to the National Hospital in Colombo (NHC) for treatment of foot ulcers of less than 4 weeks' duration. The subjects were interviewed using a structured questionnaire to identify the event that preceded the ulcer, and the type of footwear in use at the time.

The second study was carried out in the NHC and another teaching hospital in the same province (Sri Jayawardena Pura Hospital). In this study, 204 consecutive patients who had stable diabetes and were without acute infections or foot ulcers, and attended out-patient clinics were selected for the study (66 males and 138 females). An interviewer-administered questionnaire was used to collect the data, which included past experience of foot ulcers and details of footwear use. A positive history of foot ulcers was diagnosed if the patient gave a history of a slowly healing ulcers in the tips or pulp of the toes, plantar aspect of metatarsal heads or heels. There was no attempt to differentiate between neuropathic or ischaemic ulcers. A comprehensive physical examination was performed, including palpation of peripheral lower-limb pulses, sensation to light touch using cotton wool, and inspection for diabetic foot disease. Peripheral vascular disease (PVD) was diagnosed clinically if the lower limb pulses were absent. Peripheral neuropathy (PN) was diagnosed if there were symptoms of peripheral numbness and if sensation to light touch was diminished.

In order to compare the footwear habits of diabetics and non-diabetics, we selected 219 controls from the same clinics. They were matched for age and sex, and came for acute illnesses. They had no history of diabetes, or cardiovascular or neurological disorders. Data were collected using the same questionnaire used for the diabetic group, but confined to the questions relating to footwear use.

Footwear use was analysed according to two groups: above or below 10 hours of use per 24 hours. The 10 hour cut-off was used because it approximated footwear use throughout most of the daytime. Knowledge of diabetic foot disease and care was tested using 10 questions on foot hygiene. These included basic knowledge on: how to self-examine the feet; steps to follow when cleaning feet and cutting nails; the contribution of ill-fitting footwear to foot disease; basic care of an injured foot; and the complications of diabetic foot disease. As the questions were simple, knowledge was considered adequate if the optimum score of 10 was achieved. A χ2 test was used to compare data between the groups.

In the first study, 32 (42.4%) of the patients clearly stated that the ulcer originated from either a prick (eg pin or thorn) or a knock on a hard object (eg on a stone). Twenty-seven of them (84%) were barefoot at the time of the injury. The origin of the ulcer was not clear or not known in the remaining 43.

Table 1: Characteristics of diabetics with detail of footwear use

Poorer developing countries have a larger rural population compared with developed countries, and such rurality has been associated with walking barefoot4. The results of our studies suggest that walking barefoot is an important risk factor for diabetic foot ulcers. The first study showed that 42.4% of in-patients with diabetic foot ulcers gave a clear origin for the ulcers of injury by sharp or hard objects. In this group, 27 (84%) were barefoot, which suggests 27/75 (36%) of the ulcers were potentially preventable with appropriate footwear use. The second study confirmed the link between foot ulceration and footwear use by showing that barefoot diabetics had a risk ratio of 2.21 of foot ulcers, compared with footwear users. This is despite the barefoot group having diabetes for a shorter duration and having a lower proportion of those with PVD. The importance of footwear to prevent diabetic foot ulcers (as well as web-space infections and toe nail infections) was further supported by the finding that those using footwear for a longer duration (>10 hours per day) had lower rates of ulcers than those who used footwear <10 hours.

The studies had several limitations. No data were collected on the socioeconomic status of the subjects, or objective evidence of diabetic control. In the first study, data on the origin of the foot ulcer depended on the recall of the patient. The duration of the ulcer was limited to 4 weeks, in the hope of assisting recall of the origin of the ulceration. The second study used clinical criteria to identify PVD and PN (an example of clinical research that could be carried out in remote rural locations with few resources). A further investigation using more sophisticated investigations such as Doppler of lower limb arteries and nerve conduction studies is being planned.

The study showed that diabetics compared with controls had poorer footwear habits. It may be that the diabetics were from a poorer socioeconomic group, and that cultural factors influenced their behaviour. Those with little money to spend on footwear may also be lacking in education about general hygiene measures such as footwear use. Culturally, in many developing countries, footwear use was associated with elite classes or arriving colonialists. Even in the current era, footwear use appears to be more widespread in urban areas than in rural communities. The willingness of almost 70% of diabetics to use properly designed footwear, however, indicates potential for intervention in the population studied. Therefore there is an urgent need to investigate the epidemiology of footwear use in different communities and areas. For example, a hospital-based study in a referral centre in India reported that a significantly higher percentage of rural diabetic persons (15%) walk barefoot compared with urban diabetics (11%)13. Such observations need to be confirmed using community based studies and complemented with qualitative studies. The latter would be helpful in explaining varying patterns of footwear use and underlying cultural and economic factors.

What is the relevance of these findings to poorer countries where a majority of people walk barefoot? Footwear use is the norm in affluent countries and therefore most publications fail to acknowledge the role of walking barefoot as an aetiological factor of diabetic foot disease. Instead the critical factor is considered to be shear force causing tissue breakdown in the insensate foot5,6. Prevention strategies too, assume universal footwear use and promote the introduction of shoes with extra depth and width7,8. Such strategies are unlikely to be relevant in regions where populations do not even use the simplest forms of footwear, such as 'slippers'. Even in the literature from developing countries and international forums, there is inadequate attention drawn to the aetiological link between barefoot walking and diabetic foot disease9-12. Some do not mention that being barefoot is a risk factor9. Others give priority to prevention strategies more relevant to western countries, or focus on management of already formed ulcers10,11. A few studies recognize that barefoot walking causes or exacerbates diabetic foot disease, although they do not give data to support their claims4,9,12. A single study from Canada on Aboriginal populations includes footwear use as one of its main strategies to preventing diabetic foot disease13.

The implications of our study are twofold. First, health professionals must recognize that barefoot walking is an aetiological factor for diabetic foot disease. Second, health education programs for diabetics in poorer developing countries and among the socially excluded in developing countries (such as Aboriginal groups) can be improved by incorporating two simple messages: (i) safe footwear should be worn; and (ii) those already using appropriate footwear should do so for most of the day.

9. Diabetes India. Your feet are for a lifetime. (Online) no date. Available: http://www.diabetesindia.com/diabetes/feet_long_time.htm (Accessed 2 May 2007)