The future, our rural populations and climate change - a special issue of Rural and Remote Health 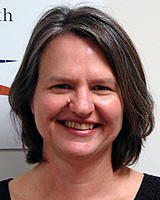 Public health specialist and demographer with an interest in health systems in rural and remote Australia and low- and middle-income countries.