A rare large cutaneous ulcer from the rural area, Democratic Republic of Congo. What is the diagnosis: Buruli ulcer? 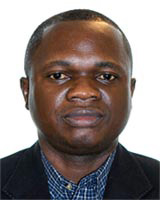 1 Department of Surgery, Faculty of Medicine, University of Kinshasa, Democratic Republic of Congo

Mycobacterium ulcerans disease, commonly called Buruli ulcer (BU), is a neglected and emergent tropical disease1. Buruli ulcer is endemic in the rural wetlands of the tropical countries/regions of Africa, The Americas, Asia, and Australia but is uncommon in non-African countries1. Infection with M. ulcerans often leads to extensive destruction of skin and soft tissue with the formation of large ulcers2. Ulcerative and non-ulcerative forms of the disease exist. The non-ulcerative lesions may be papules, nodules, plaques, edemas or osteomyelitis2. The disease often occurs in people who live or work close to rivers and stagnant bodies of water3. The disease is more severe in impoverished inhabitants of remote rural areas. Approximately 70% of those affected are children under the age of 15 years2. The characteristic skin ulcers have undermined edges and are usually painless.

A 24 day-old female newborn from the village of Nkamuna (an endemic area for BU in Songololo Territory, Bas-Congo Province, Democratic Republic of Congo), presented on 28 May 2007 to the Nkamuna Medical Centre with an extensive ulcerated lesion on her abdomen and back with satellite ulcers (Fig1). Typical of BU, edema had appeared on her back 2 weeks prior to presentation. The edematous area deteriorated and an ulcer with undermined edges formed, also typically observed in BU. The patient presented no symptoms of a bacterial infection (fever, enlarged lymph nodes etc). An initial diagnosis of BU was based on the clinical and epidemiological findings. 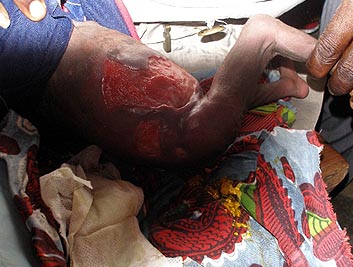 The combination rifampicin-streptomycin recommended by WHO for BU treatment4 was not prescribed because streptomycin was contraindicated in this 24 day-old newborn. Surgery (large excision) under general anesthesia and medical transfer to the nearest provincial hospital were not possible due to logistical constraints. Consequently, the patient was treated with oral ampicillin. The dressings were changed daily with an aqueous solution of chloramines-metronidazole-nitrofurandoïne5. Unfortunately, the patient died 2 weeks later.

Buruli ulcer is rare to unknown in newborns. This case illustrates the difficulties physicians encounter in rural areas in making a diagnosis of BU and choosing treatment on the basis of history and physical examination. Added to this, in our case, a precise diagnosis was not possible even after medical investigations. This case report demonstrates that in a rural area the clinical diagnosis of large ulcers, including differential diagnosis, may be more difficult than is usually reported.

The author thanks Professor Francoise Portaels (Institute of Tropical Medicine, Antwerp, Belgium) and Professor Wayne M Meyers (Armed Forces Institute of Pathology, Washington, USA) for microbiologic and histopathologic analysis. Also thanked are Kayinua (General Hospital of Nsona-Mpangu, RDC) and Belly (MC of Nkamuna, RDC) for their cooperation and participation in the study.

4. World Health Organization. Provisional guidance on the role of specific antibiotics in the management of Mycobacterium ulcerans disease (Buruli ulcer). WHO/CDS/CPE/GBUI/2004.10. Geneva: WHO, 2004.

This PDF has been produced for your convenience. Always refer to the live site https://www.rrh.org.au/journal/article/1310 for the Version of Record.