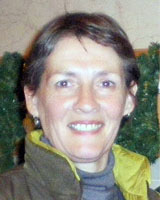 © Jennifer Richmond 2010 A licence to publish this material has been given to James Cook University, jcu.edu.au

Rationale: Home oxygen is the most expensive equipment item that Medicare purchases ($1.7 billion/year).
Objectives: To assess geographic differences in supplemental oxygen use.
Methods: Retrospective cohort analysis of oxygen claims for a 20% random sample of Medicare patients hospitalized for obstructive lung disease in 1999 and alive at the end of 2000.
Measurements and Main Results: While 33.7% of the 34,916 hospitalized patients used supplemental oxygen, there was more than a 4-fold difference between states and a greater than 6-fold difference between hospital referral regions with high/low utilization. Rocky Mountain States and Alaska had the highest utilization, while the District of Columbia and Louisiana had the lowest utilization. After adjusting for patient characteristics and elevation, high-utilization communities included low-lying areas in California, Florida, Michigan, Missouri, and Washington. Patients who were younger, male, white, and who had more comorbidities, more hospital admissions, and lived at higher altitudes and in areas of greater income also had higher odds of using supplemental oxygen. Residing in rural areas was associated with higher unadjusted oxygen use rates. After adjustment, patients living in large rural areas had higher odds of using oxygen than patients living in urban areas or in small rural areas.
Conclusions: There is significant geographic variation in supplemental oxygen use, even after controlling for patient and contextual factors. The Centers for Medicare & Medicaid Services should examine these issues further and enact changes that ensure patient health and fiscal responsibility.

Context: Alzheimer's patients living in rural communities may face significant barriers to effective outpatient medical care.
Purpose: We sought to examine rural-urban differences in risk for ambulatory care sensitive hospitalizations (ACSH), an indicator of access to outpatient care, in community-dwelling veterans with dementia.
Methods: Medicare and Veteran Affairs inpatient claims for 1,186 US veterans with dementia were linked to survey data from the 1998 National Longitudinal Caregiver Survey. ACSH were identified in inpatient claims over a 1-year period following collection of independent variables. Urban Influence Codes were used to classify care recipients into 4 categories of increasing county-level rurality: large metropolitan; small metropolitan; micropolitan; and noncore rural counties. We used the Andersen Behavioral Model of Health Services to identify veteran, caregiver, and community factors that may explain urban-rural differences in ACSH.
Findings: Thirteen percent of care recipients had at least 1 ACSH. The likelihood of an ACSH was greater for patients in noncore rural counties versus large metropolitan areas (22.6% vs 12.8%, unadjusted odds ratio [OR]= 1.99; P < .01). The addition of other Andersen behavioral model variables did not eliminate the disparity (adjusted OR = 1.97; P < .05).
Conclusions: We found that dementia patients living in the most rural counties were more likely to have an ACSH; this disparity was not explained by differences in caregiver, care recipient, or community factors. Furthermore, the annual rate of ACSH was higher in community-dwelling dementia patients compared to previous reports on the general older adult population. Dementia patients in rural areas may face particular challenges in receiving timely, effective ambulatory care.

Context: Cross-sectional studies have identified rural-urban disparities in veterans' health-related quality-of-life (HRQOL) scores.
Purpose: To determine whether longitudinal analyses confirmed that these disparities in veterans' HRQOL scores persisted.
Methods: We obtained data from the SF-12 portion of the veterans health administration's (VA's) Survey of Healthcare Experiences of Patients (SHEP) collected between 2002 and 2006. During that time, the SHEP was randomly administered to approximately 250,000 veterans annually who had used VA outpatient services. We evaluated 163,709 responses from veterans who had completed 2 or more surveys during the years studied. Respondents were classified into rural-urban groups using ZIP Code-based rural-urban commuting area designations. We estimated linear regression models using generalized estimating equations to determine whether rural and urban veterans' HRQOL scores were changing at different rates over the time period examined.
Findings: After adjustment for sociodemographic differences, we found that urban veterans had substantially better physical HRQOL scores than their rural counterparts and that these differences persisted over the study period. While urban veterans had worse mental HRQOL scores than rural veterans, those differences diminished over the time period studied.
Conclusions: Rural-urban disparities in HRQOL scores persist when tracking veterans longitudinally. Reduced access among rural veterans to care may contribute to these disparities. Because rural soldiers are overrepresented in current conflicts, the VA should consider new models of care delivery to improve access to care for rural veterans.

Determinants of mammography use in rural and urban regions of Canada
James Ted McDonald, Angela Sherman

Introduction: National guidelines advocate biennial mammography screening for asymptomatic women aged 50-69 years. Unfortunately many women do not abide by such recommendations, and evidence indicates that compliance rates are lower in rural areas.
Methods: We estimated logistic regression models using data from the Canadian Community Health Survey for 2002/03 and 2004/05. We identified the extent of regional variation within and between Canadian provinces using a new and more detailed set of rural indicators based on economic zones of influence, after accounting for a range of demographic and socio-economic factors.
Results: The odds of asymptomatic women aged 50-69 years having undergone mammography during the previous 2 years were significantly lower for those residing in relatively remote and rural areas than for those residing in census metropolitan areas (odds ratio [OR] 0.58, confidence interval [CI] 0.42-0.80). This was also true of women residing in certain other rural areas that had some limited labour market attachment to larger urban areas (OR 0.81, CI 0.70-0.93), but there were no significant differences between smaller and larger urban areas. We also found variation in mammography use among women living in rural and urban areas across provinces.
Conclusion: Mammography use is significantly lower in rural and remote areas, even after a range of other demographic and socio-economic factors are accounted for. One important factor underpinning this result appears to be differences in attitude about the importance of regular mammography screening between women residing in rural and urban areas. Information campaigns raising awareness about the importance of mammography screening should be targeted, in particular, at women residing in rural and remote areas.

Objective: This paper outlines the methods and baseline data from a multisite cohort study of the determinants and outcomes of mental health and well-being within rural and remote communities.
Methods: A stratified random sample of adults was drawn in non-metropolitan New South Wales using the Australian Electoral Roll, with the aim of recruiting all adult members of each household. Surveys assessed psychological symptoms, physical health and mental disorders, along with individual-, family/household- and community-level characteristics. A stratified subsample completed a telephone-administered World Mental Health-Composite International Diagnostic Interview (World Mental Health-3.0). Proxy measures of child health and well-being were obtained. Follow up of this sample will be undertaken at one, three and five years.
Results: A total of 2639 individuals were recruited (1879 households), with 28% from remote/very remote regions. A significant relationship was found between recent distress (Kessler-10 scores), age and remoteness, with a linear reduction of Kessler-10 scores with age and the lowest mean scores in remote regions.
Conclusions: Existing rurality categories cannot address the diverse socio-cultural, economic and environmental characteristics of non-metropolitan regions. While it has limitations, the dataset will enable a fine-grained examination of geographic, household and community factors and provide a unique longitudinal dataset over a five-year period.

Objective: This study investigates the relationship between levels of mental health and well-being (in terms of self-reported levels of distress) with employment and occupational status of rural residents, to better inform the provision of mental health services to those in greatest need in rural communities.
Method: A stratified random sample of community residents in rural and remote New South Wales with over-sampling of remote areas as first stage of a cohort study. Psychological distress was measured using Kessler-10, inclusive of additional items addressing functional impairment (days out of role). Occupational data were classified using Australian and New Zealand Standard Classification of Occupations categories.
Results: A total of 2639 adults participated in this baseline phase. Among them, 57% were in paid employment, 30% had retired from the workforce, 6% were permanently unable to work and 2% were unemployed. The highest levels of distress and functional impairment were reported in those permanently unable to work and the unemployed group with rates of 'caseness' (likely mental health disorder) varying from 57% to 69%, compared with 34% of farmers and farm managers and 29% of health workers (P < 0.01).
Conclusion: The rural unemployed suffer considerable psychological distress and 'disability', yet they are not the target of specific mental health promotion and prevention programs, which are often occasioned by rural adversity, such as drought, and delivered through work-based pathways. Policy-makers and health service providers need to consider the needs of the rural unemployed and those permanently unable to work and how they might be addressed.

Background: A 2004 study showed adolescents living in rural Australia were aware of the impact of drought on self, family and community, but did not report levels of emotional distress higher than adolescents of similar age and gender in the Australian community. It was proposed that the rural lifestyle had helped adolescents build resilience for managing this environmental adversity.
Objective: To re sample adolescents from the same rural area and determine if this resilience remained after ongoing drought three years later.
Design: A mixed methods approach using focus groups and a self-report questionnaire.
Setting: Government Central Schools within the Riverina region of New South Wales.
Participants: Male and female adolescents (n = 111) aged 11-17 years completed the self-report questionnaires, while some adolescents (n = 61) within this group also participated in focus groups.
Main outcome measure: The Strengths and Difficulties Questionnaire and a Drought and Community Survey for Children comprised the self-report survey.
Results: Adolescents reported significantly higher levels of emotional distress than those in the previous study (t (191) = 2.80, P < 0.01) and 12% of adolescents scored in the clinical caseness range. Thematic analysis showed consistency with the previous study as well as new themes of grief, loss and the impacts of global climate change.
Conclusions: Results indicate a reporting of lesser well-being than was reported by a comparable group of young people four years earlier. A preventative intervention with a focus on family and community is recommended to address the mental health of adolescents enduring a chronic environmental adversity such as drought.

This PDF has been produced for your convenience. Always refer to the live site https://www.rrh.org.au/journal/article/1540 for the Version of Record.