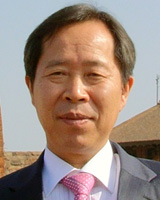 Nepal is among the least developed countries in Asia, and 80% of the population live in rural areas. Hygiene and sanitation are generally poor in Nepal with 36% of the people practicing defecation in fields or bushes1. A structured survey was conducted from June to September 2012 at the five sites of Tikapur Municipality and four surrounding Village Development Committees (VDCs) in Kailali, far-western Nepal.

Among 4204 households surveyed, 97.3% used tube wells for drinking water with 4% using purification, 1.3% boiling the water before drinking, 0.1% used water filtered through fabric, and 0.5% used chlorination. In addition, the quality of drinking water at the study sites was evaluated using Inductively Coupled PlasmaMass Spectrometry (ICP-MS). The results were a high manganese level (mean 2.262 mg/L) exceeding the 0.05 mg/L standard level for safe drinking water, but the arsenic level was within guidelines despite a recent report that 4% of tube wells in Kailali district had high levels of arsenic2. In urban areas such as Kathmandu, arsenic, chloride, fluoride and water hardness have been reported to be in agreement with WHO guidelines, but iron and coliform bacteria exceed the standards3. In other developing countries such as Bangladesh and India, disease outbreaks and worm infestation were reported to be due to consumption of contaminated tube-wells4,5.

An earlier WHO report stated that sanitation supply coverage in rural Nepal was 65% lower than in urban areas6. In the present study, liquid and solid waste management and other sanitation-related observations were investigated and found to be unsatisfactory with almost half of the respondents lacking a permanent toilet inside their houses (Table 1). This lack of access to safe waste disposal leads to some villagers disposing of their excreta near to water sources, therefore contaminating the water supply and risking water-borne infections.

This assessment will be used to design a developmental scheme to secure Tikapur's public health situation. Specifically, this study has created an awareness of the process of and need for water purification. By promoting the habit of drinking purified water, communicable diseases may be better controlled and prevented. Currently, toilets are being established in some households, and female health volunteers have been educated to disseminate drinking safe water and good sanitation habits.

This research was supported by the National Research of Korea Grant funded by the Korean Government (NRF-2010-413-B00024) and by the Korea Ministry of Environment as 'The Eco-Innovation project (Global Top Project)'.

This PDF has been produced for your convenience. Always refer to the live site https://www.rrh.org.au/journal/article/2401 for the Version of Record.