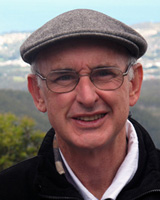 © Peter Radford 2014 A licence to publish this material has been given to James Cook University, jcu.edu.au

Context: A clinical case report is presented of some patients taking angiotensin type 2 receptor blockers (AT2RB) who collapsed without warning whilst being active outdoors in the heat.
Issues: It is not possible to recognise hypotension due to the heat by testing in a controlled environment such as a doctor's office. Many people taking AT2RBs may be thus misdiagnosed and inappropriately treated.
Lessons learned: Sudden collapse in a patient on AT2RB who is active in the heat should alert the physician to the possible cause of extreme sensitivity to low-grade volume depletion.

This is a report of a group of patients who experienced a sudden loss of consciousness whilst exercising gently in the heat. In all cases the ambient temperature was greater than 37ºC. In each case the patient was taking an angiotensin type 2 receptor blocker (AT2RB), often combined with a diuretic. Although fainting is relatively common in people taking hypotensives, most are postural (ie they occur after standing from a seated or lying position), and the patient usually has some warning and often experiences light-headedness. Some of the patients in this observational study were taking other medications, but all were taking AT2RB for treatment of hypertension. Most were not taking other hypotensive agents. Patients who were taking AT2RBs as part of a heart failure regime (and where blood pressure is usually very low due to cardioselective beta blockade) have been excluded, as were patients taking any drug with a recognised potential for hypotension. Some patients had reported light-headedness in the heat over weeks or even months before their collapse, but their blood pressures had been normal when checked by their general practitioner.

The suddenness of the loss of consciousness in the scenario described, and the lack of warning, usually makes the treating physician suspect a cardiac arrhythmia, and many of these patients are eventually admitted for monitoring, undergoing a cardiac ischaemia workup, and then having Holter monitoring done when nothing is found. Table 1 shows a log file of these patients kept over three summers (2006-2009).

Most of the blood pressures are the first one recorded on arrival at the accident and emergency department. All patients had an ECG, which was normal or unchanged, and most were tested for cardiac enzymes, again all normal. Several were admitted for monitoring, but no arrhythmias were detected. A review of records showed that none had been at all hypotensive at their last regular check-up.

All patients had blood sugar analysis on arrival, and results were within normal limits. None of the patients showed signs of heat stroke.

The first patient was taking only irbesartan and hydrochlorothiazide, and the ambulance officer had taken his blood pressure whilst he was still on the ground at the golf course. The officer observed that as soon as the man was loaded into the air-conditioned back of the ambulance, his blood pressure improved to normal. One other patient had her blood pressure taken whilst she was still on the ground. Her blood pressure was also observed to improve dramatically as soon as she was taken indoors to the cool. Dehydration does not seem to be a factor, as most were aware of the potential problem, and had been drinking what they thought was a sufficient amount.

The checking of blood pressures in a room where the temperature is controlled is not going to alert physicians to this potentially serious side effect. In rural Australia, more people are working and active outdoors and summer temperatures are generally higher than in large centres near the coast. Thus, this group of drugs may be less suitable for people who are active outdoors in the summer, such as farmers.

Experiments on rats have demonstrated that AT2RBs impair the ability of the rat to compensate for increased temperature1. The blood pressure of the treated rat was lower than the control. In addition, it was demonstrated that treated rats drank less, and had failure of central thermoregulation. Exercise tolerance of treated rats is also reduced in the heat2.

It is tempting to hypothesise that because these drugs block angiotensin they are markedly potentiated by the peripheral vasodilation that occurs in the heat, leading to a sudden, profound drop in blood pressure, which is reversed as soon as the patient is cooled.

This sort of study is easier in a rural environment, because rural GPs cover the local hospital emergency department, have more knowledge of individual patients, access to previous and follow-up records and a greater opportunity to interact with other staff. Indeed, the study would not have commenced except for an ambulance officer's initial observation of how the first patient's blood pressure had improved when they were cooled.

Patients on AT2RBs are now routinely advised by this author to take half the usual dose on days when the temperature is predicted to be greater than 35ºC, if they plan to do anything outdoors; all report feeling much better in the heat than they did before.

If one rural GP has seen this number of cases, there must be many cases occurring. This serious consequence of working or gently exercising outdoors in the heat has the potential to cause a lot of injuries and unnecessary investigation if it is not recognised and prevented.

Dr M. Cross from the Rural Health Academic Network, University of Melbourne, contributed to the formatting and writing of this article.

This PDF has been produced for your convenience. Always refer to the live site https://www.rrh.org.au/journal/article/2578 for the Version of Record.