Context:  Selenium is an essential micronutrient for human beings. Selenoproteins play a role in anti-oxidation and in maintaining immunity. Selenoproteins are distributed in all tissues, the most important of which are glutathione peroxidase, thioredoxin reductase and deiodinases. The deiodinases are selenium-dependent enzymes.
Issues:  An elderly man with lethargy and tiredness who had normal free thyroid hormone T4, thyroid-stimulating hormone and a low T3 with subnormal temperature and low selenium level. Selenium supplementation normalised thyroid function tests.
Lessons learned:  Physicians should have high level of suspicion to identify selenium deficiency as an effective replacement will cure the causative disorder.

Selenium is a cofactor for glutathione peroxidase, deiodinases and thioredoxin reductases. Seletoxicity was recognised in the early part of the century; its role in mammalian physiology was identified in 19731. The importance of selenium in thyroid metabolism was not recognised until two decades ago2. The deiodinases are selenium dependent. These cofactors are essential for synthesis and peripheral conversion of T4 to T3 and rT3. We report here a case of selenium deficiency and improvement in thyroid functions after replacement.

Even after the resolution of the infection with treatment, he continued to be unwell and lethargic. We noted subnormal temperatures on his daily vitals observation chart. Results of his investigations were as follows: haemoglobin 103 (range 135–180) g/L, white blood cell count 6.90×109 (range 4.00–11.00×109) /L, platelets 195×109 (range 150–400×109) /L. He manifested leucocytosis with high C-reactive protein, which normalised with antibiotics. Liver and renal function tests were normal.

Whenever thyroid function tests are abnormal in an admitted patient, the commonest diagnosis is sick euthyroid syndrome with low T3, normal T4 and normal or high TSH. In selenium deficiency, the conversion of T4 to T3 is impaired, giving rise to a low T3 and subtle features of hypothyroidism. The other condition with similar thyroid test results is selenium binding protein 2 deficiency, which is extremely rare and the selenium levels in this condition are much lower and thyroid functions do not respond to selenium supplementation.

Broad spectrum antibiotics and subsequent seton insertion led to complete resolution of infection. He acquired Clostridium difficile and thrush; these responded to metronidazole and amphoterecin lozenges respectively. As he also had clinical features diagnostic of Parkinson’s disease, levodopa/carbidopa 50/12.5 mg tds was commenced and he responded well to this. Selenium deficiency was treated with oral selenium 100 µg/d replacement. In view of the low temperature, lethargy and low selenium, he also received T3 10 µg/twice per day for 5 days. After supplementation his general condition improved with normalisation of body temperature.

Repeat thyroid function results 3 weeks later were as follows: TSH was 4.60 (range 0.40–4.00) mU/L, free T4 was 15 (range 9–19) pmol/L and free T3 was 3.6 (range 3.0–5.5) pmol/L. Clinically, he was much better with improved physical activity. Repeat thyroid function tests were normal. He was discharged to a nursing home. In view of his deteriorating general condition and frailty he and his family members opted for conservative management and he succumbed to a chest infection 8 months later.

Selenium is a trace mineral discovered by Berzelius in Sweden in 1817. It has attained an essential nutrient status with Recommended Daily Intake of 70 µg/day for non-pregnant adults. Its deficiency was first recognised in the Chinese province of Keshan. Keshan disease is associated with cardiomyopathy and premature death. Low selenium levels are recorded in prostate, skin, pancreatic and various other cancers; however, supplementation and surveillance trials to prevent cancer were inconclusive. In areas with endemic cretinism in Zaire, selenium deficiency was seen along with iodine deficiency3. In these scenarios, supplementing selenium alone will not cure the disorder and may in fact exacerbate hypothyroidism.

The soil in the mid-western region of Western Australia is known for its richness in various minerals but parts are selenium deficient (Fig1)4. In Finland, when selenium deficiency was identified in livestock and humans, the fertilisers were fortified with selenium. Selenium entered the food chain of the livestock, which consequentially improved human selenium levels5. Similar data are available from Western Australia6. Nutritional data show a fall in population selenium levels when the UK switched from the selenium-rich North American wheat to imported selenium-poor wheat from Europe7. These observations confirm that soil mineral status affects the health of populations, and interventions in farming and agriculture benefit nutritional status. In animals, selenium deficiency leads to muscle disease, impaired growth and reduced fertility. Animal diets are supplemented or livestock given injections to overcome this. The biological importance was reflected in the outcome from the effective public health actions in Finland.

Seafood, meat and wheat are the common dietary sources of selenium in Western populations. Brazil nuts, grains and cereals are also good sources. Selenium is present in livestock feeds, fungicides and shampoos. Selenium applied topically is not absorbed. Selenium absorption in the gut is independent of the body selenium status7. It is not possible to quantify selenium in dietary assessment methods. Seletoxicity was reported even before the recognition of selenium as an essential element. Toxicity results in alopecia, nail dystrophy, nausea, vomiting and diarrhoea and neuropathy. The upper limit of intake for adults is 400 µg/day8 although selenium excretion is regulated by the kidneys. These limits are based on the physiological data from New Zealand9.

The selenoproteins of interest in the current context are iodothyronine deiodinases. When selenium deficiency occurs, an elevated free T4 with a low T3 and normal or high normal TSH is observed. In view of the immune susceptibility, various follow-up studies of selenium supplementation were conducted in euthyroid subjects. There is not sufficient evidence currently to support supplementation with selenium to prevent disease. A summary of these studies is reviewed elsewhere10-12. Recently, selenium deficiency was reported in a variety of clinical situations, including depression13, stereotypical features of disordered thinking14, clozapine-treated schizophrenic patients15, Graves’ disease16 and cot death17. An inverse correlation was noted between thyroid cancer and selenium levels in Norwegian epidemiological data18.

Thyroid is unique in many aspects, being the endocrine gland most affected by the autoimmune process. It generates the highest amount of free radicals per gram. Thyroid cells have low proliferative capacity and long half-lives. The thyroid follicular tissue is under constant oxidative stress from the reactive oxygen species in the high H2o2 milieu. It has the highest quantity of selenium content per gram of tissue, to protect the gland from free radical damage.

Two further cases of selenium deficiency were identified after this case. Scurvy was diagnosed in an elderly woman who had been previously investigated extensively at a tertiary centre for bleeding disorder19. Micronutrient and vitamin deficiencies constitute ‘hidden malnutrition’ in the developed world. 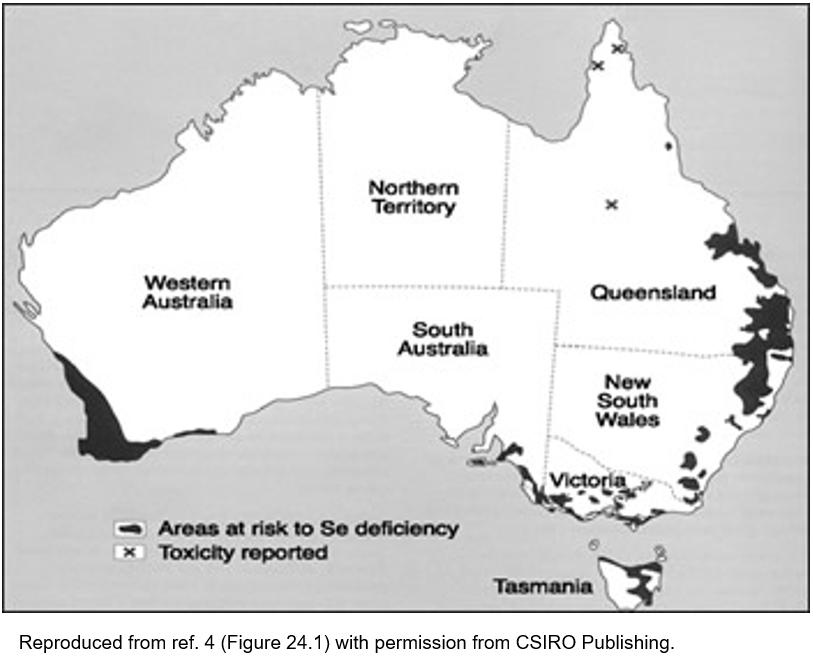 Selenium is an essential micronutrient. A unique set of enzymes are selenium dependent and these include deiodinases. A high T4, low T3 and normal or high normal TSH with features of hypothyroidism should prompt the physician to check selenium levels. Physicians should be aware of trace mineral deficiencies as bedside presentations.

This PDF has been produced for your convenience. Always refer to the live site https://www.rrh.org.au/journal/article/4350 for the Version of Record.