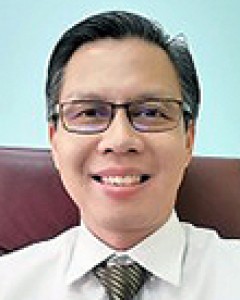 Nycticebus spp, commonly known as the slow lorus, is a small nocturnal primate found mainly in Asia. The adult slow loris weighs between 265 g and 1150 g depending on the type of species. It has a characteristic round head with large, forward-facing eyes. Slow lorises are known for their poisonous bite and are the only venomous primates. To date, there have been two published cases of slow loris bite in humans. This case report illustrates a case of anaphylactic shock following a bite of a wild Kayan slow loris (Nycticebus kayan) to a young man at Mulu District, in a remote area of Sarawak, Malaysian Borneo. The patient developed dyspnoea, a feeling of suffocation, swollen lips and cramp-like sensations over both hands. He subsequently developed syncope and hypotension. The patient was clinically stable following intramuscular injection of adrenaline 0.5 mg stat dose.

A 22-year-old male construction worker in Mulu encountered a slow loris on a tree while on his way to a food stall. The man picked up the slow loris and held it in a bird-grip position. He was planning to keep the slow loris as a pet. Initially the slow loris did not show any reaction but, after it saw the bright light at the food stall, it suddenly bit the man’s right ring finger for about 10 seconds. The man was bitten at about 9.45 pm and arrived at the Mulu National Park Health Clinic (Klinik Kesihatan Taman Negara Mulu) 15 minutes later. The patient complained of dyspnoea, a feeling of suffocation, swollen lips and cramp-like sensations over both hands.

On physical examination, the patient was alert and conscious, and there were no signs of cyanosis or tachypnoea. His lips appeared oedematous (Fig1) and there was a bite mark at the tip of his right ring finger, with no active bleeding (Fig2). The cardiovascular, respiratory and gastrointestinal examinations were unremarkable. His blood pressure reading on presentation was 113/76 mmHg, pulse rate was 72 bpm and oxygen saturation 98% under room air. The patient was treated with intravenous hydrocortisone 200 mg and intravenous chlorpheniramine 4 mg stat dose. He was also given intravenous normal saline 0.9% as bolus and maintenance fluids (2.5 L/day), and nasal prong oxygen at 3 L/min.

At about 10.40 pm, the patient suddenly experienced dyspnoea and syncope with a drop in blood pressure to 80/51 mmHg and pulse rate of 49 bpm. His oxygen saturation was 99% under nasal prong oxygen of 3 L/min. At this time, intramuscular injection of adrenaline 0.5 mg was administered stat dose, which 10 minutes later increased his blood pressure to 101/63 mmHg and pulse rate to 65 bpm. The patient was monitored closely and was observed overnight at the observation bay of the clinic. The next morning, the patient was clinically well and experienced no dyspnoea. His blood pressure and pulse rate upon discharge were 138/87 mmHg and 62 bpm respectively. He was discharged and advised to come to the clinic if symptoms recurred. 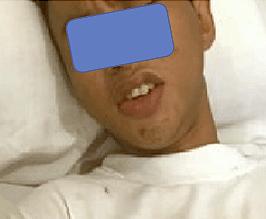 Figure 1: Oedematous lips after bite on finger by slow loris. 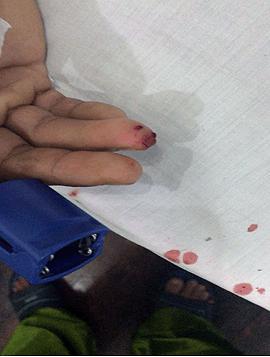 Slow loris (Nycticebus spp.) is an extremely rare nocturnal primate1,2 that is slow and solitary. Their bites can be fatal to humans. To date, there are eight known species of slow loris. The Kayan slow loris (Nycticebus kayan) are mainly found in Borneo, Malaysia3. According to Nekaris et al, and Rode-Margono and Nekaris, the venom delivery apparatus of a slow loris consists of the brachial glands located at the hair-free, slightly raised area in the flexor region of the upper arm, and the sharp toothcomb, anterior teeth of the jaw, comprising the canines and incisors4,5. When threatened, the slow loris can use its venom delivery apparatus by raising its arm above the head to combine brachial gland exudates with saliva4,5. The sharp toothcomb has been shown to enable venom to travel to the tips of the tooth by capillary forces. The slow loris bite can be very painful, causing a slow-healing wound and scars or a black scab with necrosis. The slow loris venom consists of the disulfide-bridged heterodimeric structure of the protein Fel d1, similar to the cat allergen protein, which can cause death in small mammals and anaphylactic shock and death in humans4,5.

According to a case report from Wilde, the toxic effects of slow loris (Nycticebus coucang in northern Thailand) bite on humans include anaphylactic shock with circulatory collapse complicated by haematuria6. Madani and Nekaris reported that following bites by the Kayan slow loris (Nycticebus kayan in Mulu, Malaysia) patients experienced swollen mouth, numbness of the lips and mouth; paraesthesia at the jaw, ear and foot; a sensation of pressure in the ear due to swelling; nausea; mild abdominal pain; chest pain; shortness of breath; weakness and agitation6.

In this case report, we describe an anaphylactic shock following the bite of a Kayan slow loris (Nycticebus kayan) on a human, similar to the case described by Madani and Nekaris, where the patient developed dyspnoea, a feeling of suffocation, swollen lips, cramp-like sensations over both hands within 15 minutes after the bite and subsequently developed syncope and hypotension 1 hour after the bite. The patient was clinically stable following the administration by intramuscular injection of the adrenaline 0.5 mg stat dose.

This case report will help to educate clinicians and healthcare providers working in rural areas who may see patients bitten by wildlife such as slow loris, and provide a better understanding of the toxic effects and how to manage patients appropriately.

This PDF has been produced for your convenience. Always refer to the live site https://www.rrh.org.au/journal/article/5163 for the Version of Record.