The data deficit for asthma emergency presentations might surprise you: how RAHDaR addresses the data chasm 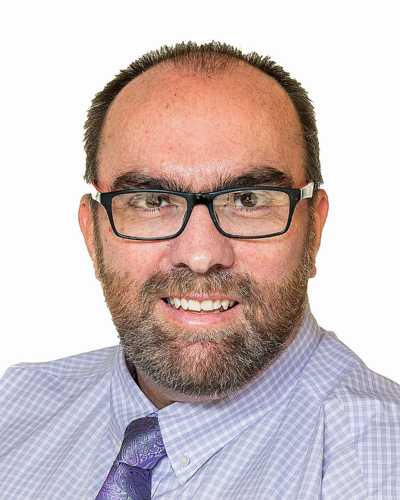 The data deficit for asthma emergency presentations might surprise you: how RAHDaR addresses the data chasm

Introduction:  National and state-based minimum data sets remain inadequate in providing a complete representation of emergency presentations, especially among paediatric asthma presentations. Thus, the aim of the study was to identify if a deficit exists in current emergency paediatric asthma hospital presentation datasets and how this may inform an understanding of childhood asthma in Victoria
Methods:  This retrospective cross-sectional study examined emergency hospital presentation data between 1 February 2017 and 31 January 2019. All paediatric (0–14 years) emergency asthma presentation data were collected from nine hospitals in south-western Victoria, Australia, using the Rural Acute Hospital Data Register (RAHDaR), which gathers both Victorian Emergency Minimum Dataset (VEMD) data from larger government hospitals, and non-VEMD data from smaller, more rural institutions.
Results:  Of the 854 emergency presentations identified for children with asthma aged 0–14 years, 540 (63.2%) were managed initially at larger government-reporting hospitals. A total of 314 (36.8%) emergency presentations were initially managed at emergency facilities, such as urgent care centres. Overall, it was found that a total 278 (32.5%) of all emergency presentations did not appear in current government datasets.
Conclusion:  The RAHDaR database, a complete register of data, captures all emergency presentations in south-western Victoria and highlights as much as a 33% deficit in the data currently available to inform asthma resource initiatives including policy development, funding allocation, prevention and management initiatives in Victoria. More accurate data from sources such as RAHDaR are essential to fill the now-evident data chasm.

Asthma is a chronic disease involving airway inflammation associated with reversible airway narrowing and obstruction in response to diverse and unrelated stimuli or disease. Primary care is essential in reducing asthma-related hospitalisations through illness prevention, controlling acute presentations, and overall management of this complex disease1. At times, asthma exacerbations can require emergency medical treatment at hospital; from a large emergency department through to smaller rural emergency facilities. In non-urban areas, access to emergency health care can vary greatly, with few alternatives and these often servicing a population with poorer health2. This is a situation seen across the globe, one that may actually be worse than reported due to a paucity of data3.

Although informative, population data and current asthma research in this area only capture self-reported national or state population health survey data, data from hospital admissions, and larger hospital emergency presentation information5. Specifically, emergency hospital presentation data in Victoria are sourced from the Victorian Emergency Minimum Dataset (VEMD)6. These data are used for planning, research and policy development. A limitation is that the state-based VEMD only captures emergency presentations from each of the 38 public hospitals across Victoria that have a designated 24-hour emergency department (ED) service6.

ED services in the 38 Victorian public hospitals are defined as being dedicated to providing emergency care, including triage, initial assessment and management of people who are in need of acute or urgent care. As an eligibility requirement, EDs must be staffed on a 24-hour basis by hospital medical staff (on shift or on call)7. These hospitals receive funding based upon activities performed (activity-based funding). Specifically, ED services are required to collect patient level data, also part of eligibility for funding. This is then reported through the VEMD as part of the health service’s overall complex funding arrangements with both the state and federal governments7.

The remaining public health services in Victoria, often in rural areas, provide urgent or critical access services that provide first-line emergency care. In these cases, urgent care centres have capacity to perform emergency resuscitation and stabilisation of patients and, where clinically appropriate, prepare patients for transfer to a higher level of care7. Health services with urgent care centres receive block funding grants to service their community’s need, including emergency care. Because these funding arrangements, which ensure adequate staffing and respective health service goods regardless of actual activity, are not based on the activity-based funding model, reporting patient level emergency presentation data is not mandatory (non-VEMD reporting institutions)7. This may lead to less reliable assessments of rural health care need or performance8. Therefore, although the VEMD data have been used to inform health planning, policy and research concerning the emergency needs of the whole population, in many aspects the gaps in the data remain unknown.

This article, using the Rural Acute Hospital Data Register (RAHDaR)3, which collects and collates both VEMD and non-VEMD data, aimed to determine if a deficit exists in current state-level emergency presentation data, and how this may inform an understanding of childhood asthma in Victoria, while also highlighting the central importance of comprehensive, high-quality data.

RAHDaR collates and securely stores data from participating institutions within the South West Alliance of Rural Health, an alliance of public health agencies that provides information technology services. Data remain the property of the hospitals involved, and only de-identified data leave the secure servers3.

All emergency presentations between 1 February 2017 and 31 January 2019 for children aged 0–14 years were included in the data extract from RAHDaR.

All RAHDaR health services were invited and agreed to participate in the study; however, one was unable to provide ICD-10 diagnosis data and therefore was excluded from the study Data fields were based on the VEMD (v22, 2017–2018) where the principal diagnosis was indicated to be asthma-related (ICD-10-AM: J45-J46)11. Both descriptive and inferential statistics were used to analyse the data, with significance set at p≤0.05.

When specifically examining the age groups, it was noted that a lower percentage (30.7%) of children aged 0–4 years were presenting to non-VEMD-reporting hospitals, which increased for the age groups of 5–9 and 10–14 years (37.9% and 38.3%, respectively). This may reflect people, particularly those with younger children, bypassing the local health services for those higher acuity or specialist services9,12,13. Despite this, no significant difference was noted in the proportion of presentations at VEMD- and non-VEMD-reporting hospitals across the age groups, F=(2,29) 0.204, p=0.816 (Fig2). 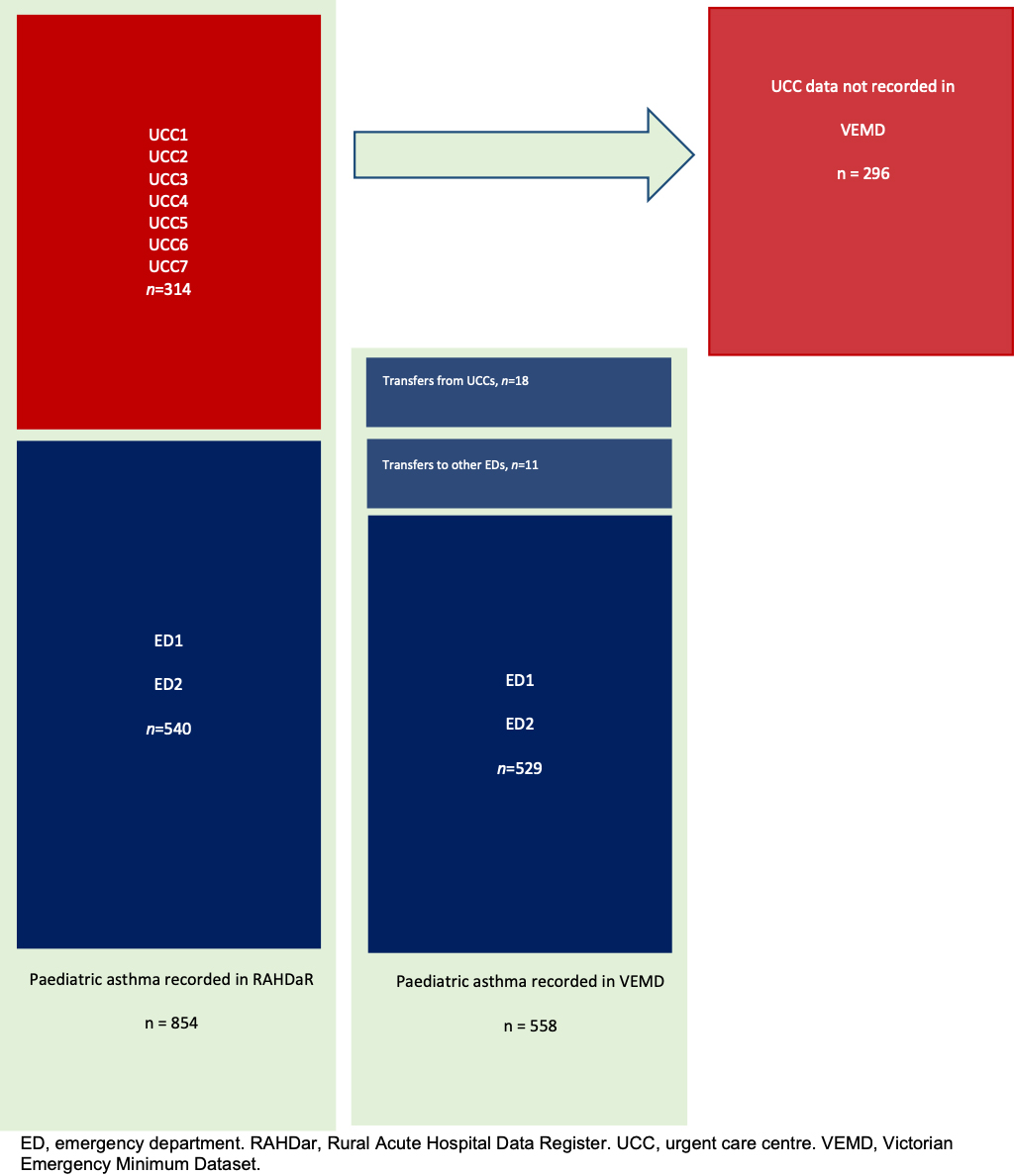 This investigation has highlighted a gap in the data concerning childhood asthma, and potentially other disease presentations, that has previously been missed when looking at larger emergency department presentation data alone. Considered in broad terms, RAHDaR has shown that, since the inception, almost 33% of the asthma data for children aged 0–14 years in south-western Victoria is missing from the more readily available VEMD. Although previous work has explored the tendency of the large, urban-focused, administrative datasets to misrepresent the level of activity in small rural hospitals due to its incompleteness14, RAHDaR quantifies the degree of this deficit in the understanding of childhood asthma.

Although national and state-based population surveys and national minimum data sets seek to close some of these gaps in understanding concerning asthma, they remain inadequate to ensure a complete picture is provided, specifically when related to emergency presentations at urgent or primary care services5. Presently, VEMD is missing a significant proportion of the total asthma story when considered in the context of Victoria. As demonstrated here, RAHDaR remains vital in accessing more than a third of the asthma surveillance data that we now know exists through the activity of smaller rural hospitals in south-western Victoria.

RAHDaR’s comprehensive and complete register of data may provide a genuine and more exhaustive understanding of childhood asthma, which represents a portion of all emergency presentations that occur in rural and regional Victoria, yet does not appear in current government datasets. Therefore, more comprehensive datasets may improve asthma management, lead to a reduction in hospital presentations and transfers to larger facilities, or better understand parent decision-making processes when infants and children experience an emergency such as asthma12,13. The findings may also have implications for how services, particularly urgent or primary care services in rural and regional areas, are staffed and funded, and may more comprehensively inform the utilisation of the medical and healthcare workforce in smaller communities. RAHDaR also highlights that what was previously known about asthma rates in rural and regional areas may not provide an accurate representation of what is actually occurring beyond larger health services. This suggests more accurate data from sources such as RAHDaR are essential to fill the now-evident data chasm.

This research has been supported by the Australian Government through the School of Nursing and Healthcare professions at Federation University Australia, the Centre for Rural Emergency Medicine, School of Medicine, Deakin University, and Southwest Healthcare.

RAHDaR has been developed by Dr Kloot and Dr Baker at the Centre for Rural Emergency Medicine, School of Medicine, Deakin University. We acknowledge that there may be a real or perceived conflict of interest with Dr Kloot as an author of this article.

This PDF has been produced for your convenience. Always refer to the live site https://www.rrh.org.au/journal/article/5776 for the Version of Record.