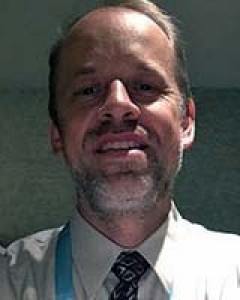 Context:  Rural hospitals in the USA are often served by advanced practice nurses, due to the difficulty for such facilities to recruit physicians. In order to facilitate a full range of services for patients, some states permit advanced practice nurses to practice with full independence. However, many states limit their scopes of practice, resulting in the potential for limited healthcare access in underserved areas. The COVID-19 pandemic temporarily upended these arrangements for several states, as 17 governors quickly passed waivers and suspensions of physician oversight restrictions.
Issues:  Physician resistance is a primary hurdle for states that limit advanced practice nurse scopes of practice. Longstanding restrictions were removed, however, in a short period of time. The pandemic demonstrated that even governors with strong political disagreements agreed on one way that healthcare access could potentially be improved.
Lessons learned:  Despite longstanding concerns over patient safety when advanced practice nurses practice with full autonomy, governors quickly removed practice restrictions when faced with a crisis situation. Implied in such behavior are that policymakers were aware of advanced practice nurses’ capabilities prior to the pandemic, but chose not to implement full practice authority, and that governors appeared to disagree as to whether to temporarily waive specific restrictions or suspend restrictions entirely, consistent with their political affiliation. We propose more research into understanding whether or not such changes should become permanent.

Rural states in the USA have long relied on several types of advanced practice nurses (APNs), including nurse anesthetists (CRNAs), certified nurse midwives (NMs), and nurse practitioners (NPs), to staff their hospitals, as they often have a difficult time attracting physicians1-3. To facilitate this process, such states have been more likely to permit APNs to have full practice authority. However, despite increasing pressure to reduce costs and accommodate more patients in hospitals, only 21 states afforded NPs full scopes of practice at the beginning of 2020, while the majority of states restrict CRNAs and NMs as well4. This report highlights how the COVID-19 pandemic has upended the typical status quo bias present in states5, which has traditionally promoted the maintenance of APN practice restrictions, prompting 17 states to lift NP and other APN restrictions in a matter of 21 days.

As a reference, only 11 states have adopted NP full practice policies over the last 20 years. This type of policy does not change easily, as such decisions are often politically charged, so it is notable to see such rapid change in a 3-week time frame. While this is not the proper forum to fully explore all of the intricacies contributing to this phenomenon, there is potentially a tremendous amount of insight to be attained from understanding how this rapid evolution has unfolded.

The following paragraphs present some introductory analysis, in order to start the conversation around what it will take to make these changes permanent, should the results show that allowing full practice arrangements for APNs is beneficial to the US public. This is an area of interest that can especially inform rural policymakers and other stakeholders, given their history of reliance on APNs to maintain many critical rural hospital functions. As well, this article aims to push forward the conversation regarding one important area in the social organization of health care.

Recent research has elaborated some of the contributing factors to the resistance surrounding the expansion of APN scopes of practice. Physician resistance is a primary reason that APN scopes of practice are restricted6,7. Physician lobbies are strong and, consistent with the notion that physicians use their power to protect their financial interests, higher levels of political contributions by physicians are associated with preventing NP full practice authority8. Also, the overall influence emanating from higher concentrations of anesthesiologists in a state results in non-adoption of Centers for Medicare and Medicaid Services’ rules expanding nurse anesthetist autonomy6. Physicians can feel threatened by NPs when they are viewed as competition9.

Alternately, when CRNAs are relatively more prevalent than anesthesiologists in a state, and thereby possess more power, states are more likely to expand CRNA autonomy6. Labor shortages often contribute to higher numbers of rural hospitals also being associated with expanding state-level APN scopes of practice6. Beyond these antecedents, it is not clear what will be required to change the remaining states’ APN scopes of practice. As such, the COVID-19 pandemic provides an important opportunity to understand how these restrictions have begun to erode.

Following WHO’s declaration of a global pandemic and the USA’s declaration of a national emergency, governors began issuing executive orders on 13 March (Table 1)10. In these executive orders, governors pursued two different strategies allowing them to temporarily expand APN scopes of practice. The first strategy was to enact waivers. Out of the 17 states that loosened restrictions, 11 of them adopted waivers, and eight of the first nine adoptions were of this nature. Given the extent of the recent friction between the two major political parties in the USA, it is potentially instructive that governors from one political party (Republicans) enacted eight of the waiver adoptions. In the executive orders, specific constraints were addressed. Instead of making blanket removals of restrictions, governors and/or their advisors had taken the time to address particular issues that they felt were limiting access to care for their constituents during this public health crisis.

For example, Texas had a pre-existing set of protocols that were adopted in 2019 for situations where there was an emergency declaration. Therefore, once the governor declared the emergency, some specific steps were implemented, such as expanding prescriptive authority for physician assistants and APNs. Additionally, the other 10 ‘waiver’ states implemented various policies such as expanding scopes of practice requirements for APNs (eg temporary removal of supervision requirements for CRNAs or expansion of prescription authority for NMs), and license expiration extensions. The other six states that expanded APN scopes of practice enacted suspensions of all restrictions.

Suspensions were designed to completely remove any restrictions placed on specific APN clinicians. The six states that enacted suspensions were New York, Maine, Wisconsin, Kentucky, Louisiana and New Jersey, and each of these states has Democratic governors. These executive orders were blanket orders suspending the restrictions on APN practice, including prescription privileges, collaboration agreements, and any physician supervision requirements normally in force. Some of these suspension states were among the hardest hit states, with the highest numbers of COVID-19 cases11. Given the well documented anticipation of mask, ventilator and provider shortages, governors certainly placed hope in the idea that removing any oversight rules would take away all limitations on valuable practitioners from providing necessary care. Currently, it is not yet known how effective these strategies have been. Future research should certainly explore this question. 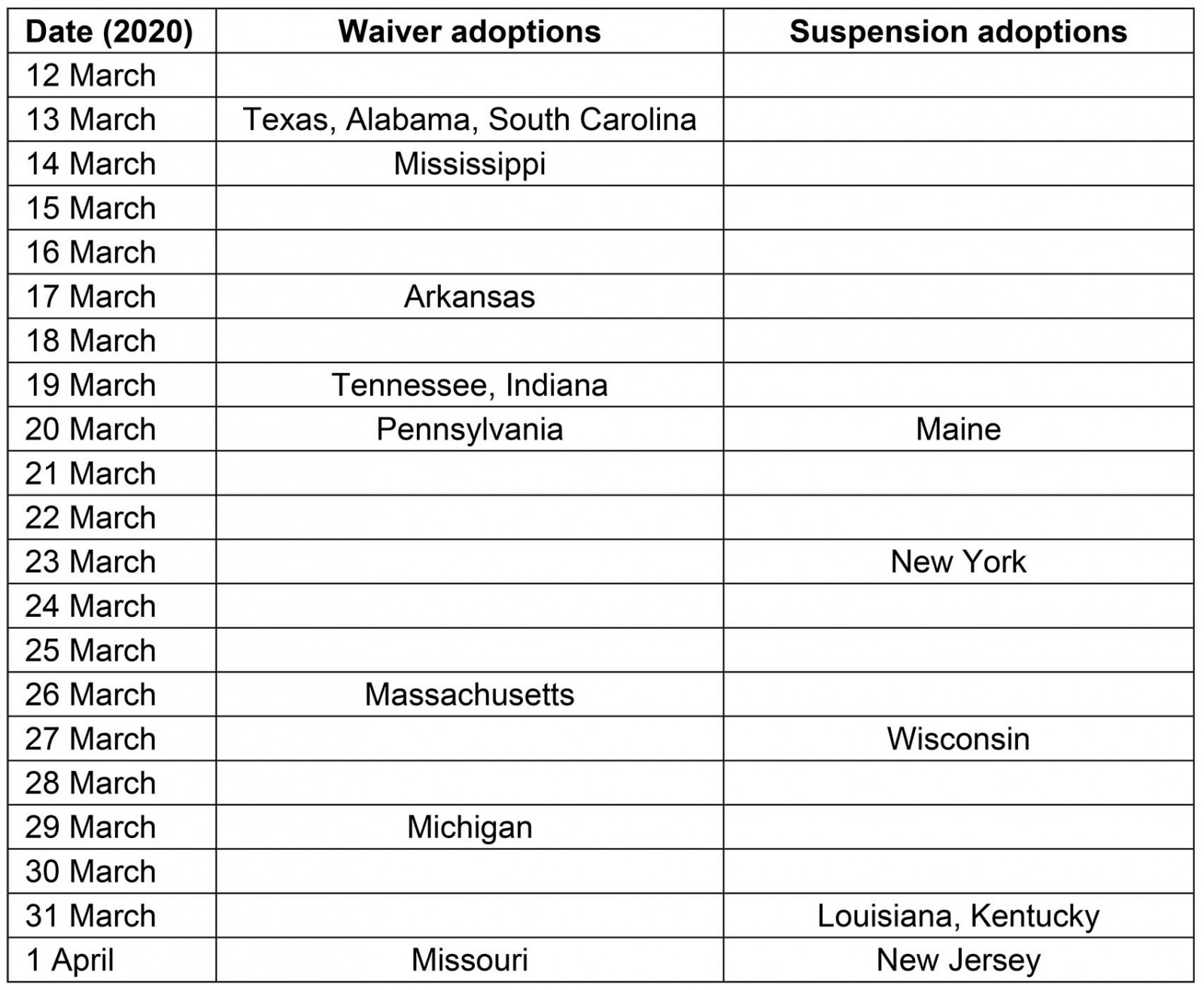 One of the clear takeaways from this phenomenon is how quickly these strategies were available to be implemented by governors. Although we cannot yet determine this with certainty, we argue that such quick implementations imply that contingency plans were in place prior to the COVID-19 pandemic to more fully utilize APN skills and education. Given the rapidity of the adoptions, and the often-elaborate practice details present in the state orders, it is unlikely that the earliest adopters could construct the orders from scratch overnight. It is quite possible that it took such a drastic event to allow APNs to be more widely used, even if it is on a temporary or perhaps even a trial basis.

Future research would be warranted as to what drove particular strategies, in addition to why other states adopted none. On the surface, it appears as if waivers and suspensions were largely made consistent with particular political ideologies. Given the historical role of interest group politics in the determination of APN scopes of practice and licensing policy formation, we suspect that there are components inherent in each of these strategies that coincide with governor political affiliations. Further, how physician influence and objections were overridden is still unclear. Physician objections to unsupervised APN practice typically center on education and patient safety arguments; the current natural experiment has the potential to contribute understanding as to the validity of such concerns. Understanding more about the pathways to APN independence could provide the potential to increase care access for remote and underserved patients throughout the country.

This PDF has been produced for your convenience. Always refer to the live site https://www.rrh.org.au/journal/article/6068 for the Version of Record.