The impact of politics, religion, and rurality on COVID-19 vaccine hesitancy in Oregon: a cross-sectional study

IRB approval was not necessary for this research as it utilizes public data.

Introduction:  Vaccine hesitancy has been a major barrier to mitigating the effects of COVID-19, especially in rural Oregon, USA. This study assessed the influence of political affiliation, religious identity, and rurality on vaccine hesitancy in counties across Oregon.
Methods:  Cross-sectional association analysis was performed using public data on US President Trump votership in the 2020 election, White Christian identity, population density, and COVID-19 vaccination data for adults as of 29 August 2021.
Results: By 29 August 2021, 68.0% of adults had been fully vaccinated in Oregon. Trump votership was the strongest independent association with vaccination status in Oregon (r=0.90, p<0.01), followed by White Christian identity (r= –0.69, p<0.01), and population density (r=0.55, p<0.01). In multivariate analysis, White Christian identity and political affiliation with Trump in the 2020 election explained 84.1% of the variability in COVID-19 vaccination status in Oregon counties.
Conclusion:  White Christian identity, Trump affiliation, and rurality were identified as factors in vaccine hesitancy among counties in Oregon. Without addressing these factors in public health outreach, vaccine hesitancy is likely to continue unabated.

COVID-19 vaccine hesitancy was a concern for public health leaders long before the vaccine was released. As of 16 May 2022, with more than a year of vaccination campaign efforts underway in the USA, the percentage of fully vaccinated people has leveled off at 67% of the total population1. In Oregon, 71% of the total population has been fully vaccinated2. As of 31 January 2022, the difference in vaccination rates between the most urban areas and the most rural areas in Oregon was stark, with 91.4% of people in central metropolitan areas and 67.6% of people in non-core rural areas having received at least one dose of vaccine3.

The rate of COVID-19 vaccination has been lower among rural, conservative, and Christian groups. In March 2021, the Kaiser Family Foundation surveyed 1001 rural adults in the USA and found that rural residents were more likely to ‘definitely not’ get the vaccine (rural 21% v urban 10%), and the most likely groups to ‘definitely not’ get the vaccine were Republicans (32%) and White Evangelicals (31%)4. Surveys conducted in February 2021 by the Pew Research Center found that, among religious adults, White Christians were most likely to say they would not get the vaccine (White Evangelicals 45%, White non-Evangelicals 27%)5. Analysis of early vaccine efforts in March showed that still 26% of White Evangelicals say that they would not get the vaccine6. By September 2021, research indicated that counties across the USA with higher proportions of people who voted for President Trump in 2016 had lower vaccination rates and more COVID-19 deaths7.

It is important to identify and address population differences in COVD-19 vaccination and the factors associated with vaccine hesitancy for rural areas, especially in Oregon. On average, there are approximately 1.7 intensive care unit beds per 10 000 people in rural America compared to 2.8 in urban areas8. Oregon has the lowest number of hospital beds per person in the USA9. While Oregon has a higher vaccination rate than the national average, vaccination rates in rural Oregon are still lower than in urban areas2,3. This has prompted state and county health officials, clinicians, and community-based organizations, including faith communities, to find ways to work together to improve vaccine confidence in rural areas.

The purpose of this research was to see how religious and political perspectives have affected COVID-19 vaccination in rural Oregon. To understand vaccination differences across Oregon counties, the author analyzed how White Christian identity, Trump votership in the 2016 national election, and population density affect vaccination status. At this phase in the pandemic, it is important to understand differences in vaccine hesitancy in Oregon to direct state and local public health efforts to populations in need4,5,9.

This was a cross-sectional study analyzing the association between White Christian identity, political affiliation, population density and vaccination status across all counties in Oregon. Vaccine status was recorded from the Oregon Health Authority as the percentage of adults over the age of 18 years in each Oregon county that were fully vaccinated as of 29 August 20212. By 1 May 2022, any adult over the age of 16 years in Oregon was eligible to receive the vaccine, so all participants had been eligible for 4 months10. Fully vaccinated was defined as having completed the primary series, having had ‘two doses of the Moderna vaccine, two doses of the Pfizer vaccine, or one dose of the Johnson & Johnson vaccine2.’ Political affiliation was defined as the percentage of voters in each Oregon county who voted for Donald Trump in 202111. The percentage of White Christians in each Oregon county was defined by the Public Religion Research Institute as those who identify as White Evangelical, White Protestant, or White Catholic from the 2020 Census of American Religion12. Population density was defined on the county level as the number of people per square mile, documented by the 2010 Census13.

Analysis was performed in R v4.0.2 (R Project; https://www.r-project.org). Binary association analysis was performed by creating linear models of the relationship between each variable (White Christian identity, political affiliation, and population density) and vaccination status using a significance cutoff of α=0.05. Political affiliation was analyzed in multivariable analysis as an a priori identified confounder between White Christian identity and vaccination status. Population density was queried as a confounder but was significantly associated with vaccination status only. No interaction terms were significant. Outliers in population density for the two major urban metropolitan areas, Multnomah and Lane counties, were discarded for association analysis. Results of association analysis were reported as slope estimates with p-values, R2 values, and Pearson correlation coefficients.

In multivariable modeling, the percentages of White Christians and those who voted for Trump were significant in the model, whereas population density did not significantly improve the model. Together, White Christian identity and Trump votership explains 84.1% of the variation in vaccination status between Oregon counties. Association analysis results are summarized in the directed acyclic graph in Figure 2 with Pearson correlation coefficients. 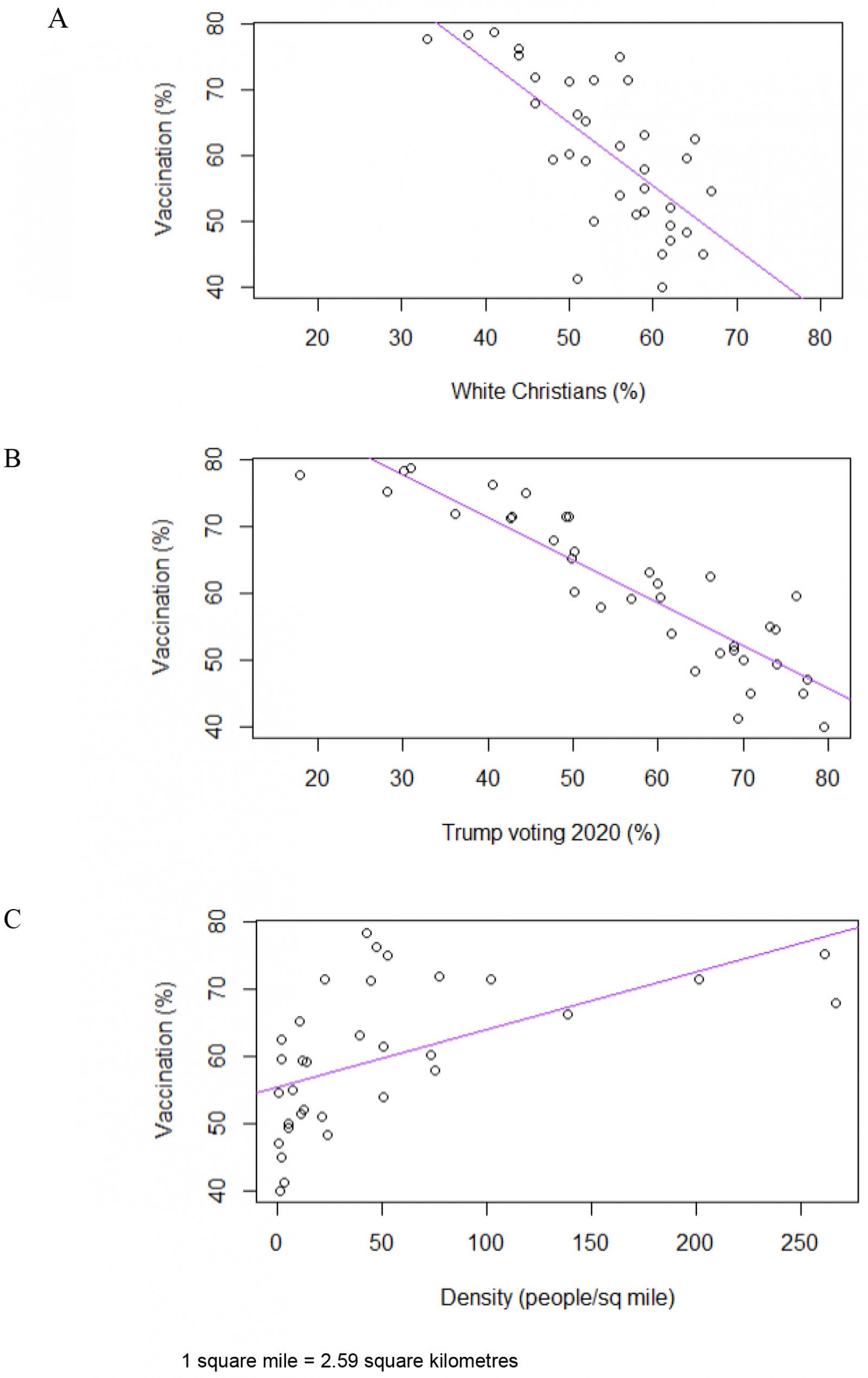 Figure 1:  Relationship between vaccination and (A) White Christian identity, (B) Trump votership, and (C) population density.

Figure 2:  Directed acyclic graph of the relationships between religion, politics, rurality, and vaccination.

The influence of rurality, conservative politics, and religious affiliation on vaccine status in the USA have been widely studied, as explained previously. This research adds to the literature in two ways. First, it is the first study to show the relationship between population density, political and religious affiliation, and vaccine status in Oregon. Second, it shares a simple methodology using publicly available data that could be used to analyze the same hypothesis for any state in the USA. By understanding these relationships, Oregon and other states can mobilize their public health forces to address vaccine hesitancy among conservative, religious citizens.

There are many reasons for vaccine hesitancy among rural, conservative, religious groups. In national surveys of people living in rural areas, the most endorsed reasons for vaccine hesitancy have been concerns that the vaccine was developed too fast or that they do not have enough information about it, concerns about side effects, and lack of trust in vaccines4,5. Sentiment analysis of 78.1 million vaccine-related messages on Twitter found that Evangelical hubs were more likely to post about operation warp speed, conspiracy theories around Bill Gates and China, and the federal administration14. Extensive qualitative analysis of conservative Christians has found that their concerns are mostly secular in nature, with the exception of the concern that research used in developing the Johnson & Johnson vaccine utilized fetal tissue15,16. Still, the divide between science and religion is hardly new and has deep roots in morality and class. Conservative Protestants do believe in the scientific method but are less likely to believe that scientists act in the best interest of the public and are more likely to have a populace distrust of elites16,17. Research processes, including vaccine development, have also not been adequately exposed to the public over the pandemic, causing confusion and distrust to fester18. Promisingly, 47% of practicing White Evangelicals, 26% of Republicans, and 24% of rural Americans say that faith-based approaches would make them more likely to get vaccinated6. A separate survey in April 2021 of more than 3000 people in South Dakota showed that people were more likely to be get the COVID-19 vaccine if they received promotion from a religious messenger (28%) compared to a political (16%) or medical (14%) messenger19.

From the beginning of the pandemic, public health workers and social scientists anticipated vaccine hesitancy in rural, conservative, religious populations. By now in the pandemic, we can reference a large body of literature for methods in reducing vaccine hesitancy among White Christian groups. Omnipresent in this literature is the suggestion to involve community leaders, in this case pastors, priests, and ministers, in public health efforts6,14,16,20,21. We have learned that religious leaders are generally pro-vaccine, are interested in facilitating community vaccine discussions, but desire partnership with medical experts to deliver scientific information14,15,17,20,22. However, it is imperative that public health efforts focus not only on a classical ‘knowledge gap’ model, but also collaboration with religious leaders to engage with moral and ethical dilemmas preventing interest in vaccination15,17. Religious leaders have a weekly captive audience from some of the most vaccine-hesitant communities, making these leaders the ideal candidates to deliver public health messaging16,23.

We need to also recognize non-religious, non-political reasons for not being vaccinated in rural areas, including lack of ability to take time off from work or from caring for loved ones, lack of internet access, lack of capacity for understanding vaccine site scheduling, and lack of transportation16,24. County-level data from September 2021 has shown that, in counties with higher proportions of Trump 2016 voters and non-Hispanic White populations, there was not only lower vaccination rates, but also a greater prevalence of poverty and lower education levels, which each contributed independently to lower vaccination rates7. Future public health research would be helpful to model barriers to receiving a vaccine in rural Oregon, such as distance to a vaccination site.

There are several limitations to this study. First, data were used from four different public datasets where the surveys were conducted at different time periods. Religious and political identities are likely close to but not exactly as portrayed in the present study’s data. Population density is from the most recent available Census data, which was collected 11 years ago and may not precisely estimate the true population density. Second, the four datasets used in this study were each conducted differently using different sampling methods. The results of this data should be considered in light of the least powerful study, the PRRI Religious Census. Third, the author made the decision to discard two outliers (Multnomah and Lane County) as urban outliers in population density for association analysis. Association between density and vaccination was significant both with and without these outliers, but density had a greater effect on vaccination status without the outliers (R2=0.30 v 0.20) and reflects the experience of rural counties in Oregon, which is the main focus of this research. Fourth, this research discusses prevalence of full vaccination and does not include a discussion of partial vaccination, since reasoning for partial vaccination is more complex and includes people who intend to be fully vaccinated at some point. Finally, this research does not account for religious communities of color, who may have similar or different relationships to political identity and vaccination as White Christians. Future research should assess the relationship between religion and vaccine status for people of color as well as non-Christian religious groups.

This PDF has been produced for your convenience. Always refer to the live site https://www.rrh.org.au/journal/article/7140 for the Version of Record.