© rodney samaan, A Nemes, K Pearce, S Matheny, S Crockett, K Seydel 2001 A licence to publish this material has been given to Deakin University, deakin.edu.au

Introduction: Mondaña Clinic is a small rural clinic located in the Napo river region of the Amazon basin in Ecuador. Since its opening in 1997 the clinic has grown to be the primary health care facility for approximately 3000 individuals.
Methods: A retrospective study was performed tabulating the ambulatory diagnosis, age, sex, and domicile of patients over a 9 month period in 1999.
Results: During the study period there were 765 patient visits that resulted in at least one diagnosis. Of the patient visits, 175 (22.8%) resulted in multiple diagnoses. Women accounted for 58% of the patient visits, which is similar to the 60% of ambulatory patient visits made in the USA by women. The age distribution showed 66% of patients were under 25 years of age. When comparing diagnoses of males with females, several differences were noted. As expected, urinary tract infections were approximately four-fold more common in females than in males. Gastritis and headaches were also more common reasons for patient visits in the female population than in the male. Conversely, lacerations, abrasions, and contusions ranked higher in the male than in the female population for patient visits.
Conclusion: This study is the first to provide public health information for this region that will prove useful to the health professionals and funding agencies working in the region. Furthermore, it provides a baseline for comparison with other regions in Ecuador and South America in general, as well as comparisons with data-rich countries such as the USA.

The purpose of this study was to retrospectively collect health statistical data from the Mondaña Health Clinic in Mondaña, Ecuador (Figure 1). The clinic is a project of the Foundation for Integrated Education and Development (FUNEDESIN), a non profit non-governmental organization (NGO) based in Quito, Ecuador. The Mondaña clinic receives support from MAP International (a non-profit Christian relief and development organization) via USAID funding. 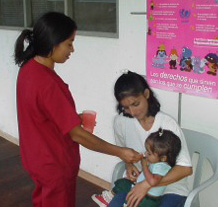 In 1992, FUNEDESIN began community development and educational outreach in the Napo Province along the Napo River. Its field headquarters is located in the community of Mondaña, located two hours (by motorized canoe) from the nearest main port of Misahuallí. There are no access roads, electricity, or telephones in the region. The Mondaña Clinic opened in October of 1997 and in 2000 served more than 3000 people in communities along the Napo River. The population base of the Mondaña Clinic service area is primarily Indigenous Quichuas and a number of colonists who have migrated from the highlands and coastal regions of the country.

The project was been funded by private, corporate, and non-profit foundation donations1.

Although accurate data have been tabulated since the inception of the clinic, there have been no attempts at collecting, organizing, and analyzing these data. Data generated from such analysis could prove useful to the physicians as well as to the funding organizations. These health data provide a baseline measure of the major health diagnoses in the clinic, which facilitates comparison with other regions of the Amazon. Furthermore, the data analysis of patient visits provide preliminary estimates of the epidemiology of the major diseases of patients seen at the clinic. A number of authors have demonstrated the usefulness of such data in describing the specialty of family practice and other primary care professions2-4. It is hoped that the present study will do the same in the Amazon region. The current study also undertook a brief comparison of data with that from the USA to demonstrate the considerable differences in activity in these two health systems.

An Microsoft Access database was designed to enter data collected from daily patient reports, which were transcribed by the physicians while documenting more detailed information in patients' charts. The variables collected and entered in the database include: date of consultation; age; sex; community; patient's name and health record number; diagnoses; and diagnosis cluster. The local physicians helped clarify and categorize certain diagnoses.

Data were collected from daily health reports between January and September 1999 (n = 765 patients). The period was less than a full year due to limitations on the study time in Mondaña. To ensure the validity and reliability of the data, the clinic numbers and names were filtered and matched to ensure consistent data in terms of patient ages and home communities. Inconsistencies were followed up by direct reference to patient health records.

The diagnostic clusters were adapted from Schneeweiss, Cherkin, Hart et al.3 and Williams, Philbrick, Becker et al.4; however, small adjustments were made to accommodate the international context. For example, because of the high prevalence of parasitic infections (rather than infectious diseases), a specific category recognizing parasitic infections as a sole independent category was created. Dagnostic clusters were also used to help facilitate a general overview, without sacrificing detail of the diagnoses clusters. As Schneeweiss and Hart wrote: 'Diagnostic clusters capture the great majority of ambulatory patient visits and result in a more manageable number of clinically related entities'5.

Data were analyzed by creating queries in Microsoft Access and creating specific categories to filter the data (i.e. sex, disease category, and domicile). Due to a shortage of time, home community data were not collected for all patients. EPI Info 2000 (WHO software) was used to analyze the data by generating frequencies and means. Microsoft Excel 97 was used for further calculations of percentages and creating pie charts and histograms. Fisher's Exact Test was performed to compare data between males and females using Analyze-It Software.

There were 765 patient visits with at least one diagnosis in the months of January 1999 to September 1999; 175 patient visits had 2 diagnoses. The demographic distribution (Table 1, Figure 2) found that of the 765 patient visits (some were repeat visits), 319/753 (42%) were made by males and 434/753 (58%) were made by females; 66% patient visits were made by those under the age of 25 years old. In most age groups, females outnumbered males for patient visits but this was not statically significant. However, there were more male patients in the 46-50 years and greater than 51 years age group. Diagnoses were always made on the basis of the patient's history and physical examination. In some cases, rudimentary laboratory tests (eg urinalysis, stool ova and parasites, and hematocrit) were used to supplement the clinician's diagnostic capabilities. 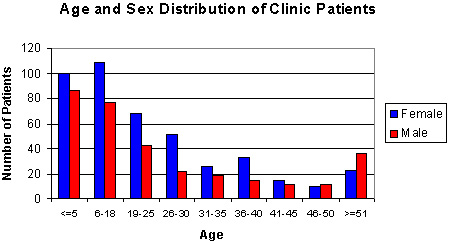 The major differences and similarities in diagnoses between the sexes for patient visits is shown (Table 2). For both males and females, the two most frequent diagnoses clusters were acute upper respiratory tract infection (URTI) and parasitic infection. However, despite these similarities, males patient visits had a higher frequencies of URTI (24.7%) and parasite infection (19.7%) than female patient visits (17.3% for both). Female patient visits had pregnancy care ranked third in frequency (14.8%), urinary tract infection ranked fourth (13.6%), and lacerations, abrasions, and contusions ranked fifth (5.4%; Figure 3). Male patient visits due to lacerations, abrasions, contusions (9.7%) ranked higher than for females; fungal infections were fourth ranked (8.4%), and dermatitis ranked fifth (6.0%; Figure 4). Gastritis ranked higher in females than in males.

Table 2: Major differences between and similarities in diagnoses for male and female patient visits to Mondaña Clinic, Ecuador, January-September 1999: 15 most frequent diagnoses 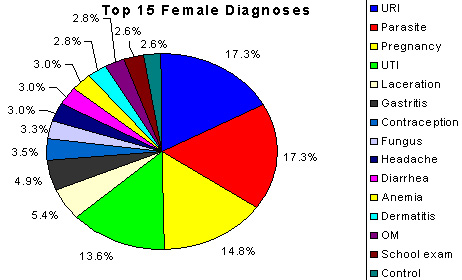 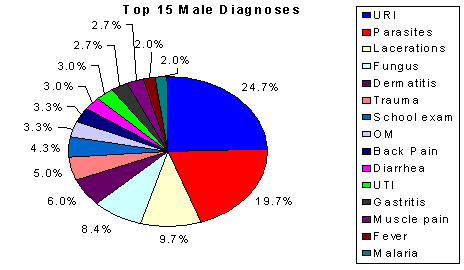 There are also major differences in the age distribution of patients at the Mondaña Health Clinic, compared with US population ambulatory visits. For example, 66% of Mondaña Clinic patients were 25 years old or younger. In the US data, 17.6% of the patients were less than 15 years old and 8.6% of the population were 15-24 years old. If the latter two categories are combined, this equals 26.2% of the population, which is considerably less than the 66% of 25 years old or younger at Mondaña. One reason for this difference is the lower life expectancy in the Amazon region. For example, although there are no statistics for the life expectancy of people living in the Amazon region, in Quito, life expectancy is 68.8 years (66.4 for males and 71.4 for females)7.

There were major differences in diagnoses between males and females visiting the Mondaña Health Clinic. Many of these differences are due to the many reasons for women's use of the clinic, including prenatal care and deliveries, and that males used the clinic only in acute emergency situations. For example, males visited the clinic for acute injuries more frequently than did females, which is consistent with the type of physical labor that men do in that area (ie agriculture). However, women used the clinic to deliver their children and to seek prenatal and postnatal care. Interestingly, normal pregnancy was the second most common diagnosis for females in the US, while in the Mondaña Clinic, it ranked third behind URTI and parasite infections.

Another major significant finding was the fourfold difference between female and male paient visits for urinary tract infections (UTI)(females 13.6% vs 3.0% p <0.001). Although UTI did not rank in the 15 most frequent diagnoses in the US data, there is evidence to suggest that females have a 50% higher risk of UTI than do males in the US8. The higher rates may be due to a combination of poor hygiene aggravated by a more humid climate. Also the different rates in males and female can largely be attributed to the anatomical juxtaposition of the GU and GI tract termini in the human female. Finally, male patient visits had a two-fold higher frequency of fungal infection diagnosis compared with female patient visits (8.4% vs 3.3% p = 0.008). The major diagnoses in the USA were not ranked in the top 15 major diagnoses in Mondaña (ie essential hypertension, diabetes mellitus, malignant neoplasm, ischemic heart disease).

These data will be of importance for those interested in working in the Mondaña Health Clinic. Visiting physicians will be able to prioritize resources and funding agencies will be able to use this information to compare to other sites in the region as well as a baseline against future preventive public health interventions.

Some limitations to the data are the validity of the diagnosis. For example, although gastritis is a pathologic diagnosis based on lab tests and endoscopy, this diagnosis was made entirely on the basis of the patient's history and physical examination. Also, parasitic and fungal infection diagnoses were made without confirmatory laboratory procedures. Furthermore, the lack of separation of the children and adults into separate groups may skew the data and lead to selection bias because children are more prone to develop certain diseases. Moreover, although the comparison between patients in Mondaña and the USA demonstrated differences in health systems, the fact that the social, political, economic, and geographic differences are extensive deemed this comparison invalid. However, one of the reasons for the comparison was that the US statistics are easily accessible.

Future studies should compare Mondaña to other South American or other developing countries. Also, the fact that our study period was 9 months rather than 12 months limits the validity of our study because this does not take into account seasonal variation over 12 months. The reason for collecting data for 9 months was time limitation.

Rodney Samaan was the principle investigator for this study. Dr Karl Seydel was involved in the preparation of the manuscript as well as the design of the graphs and calculation of the statistics. Seth Crockett and Alison Nemes were involved in the review of the manuscript. Dr Matheny and Dr Pearce provided guidance for this study and manuscript. The authors would like to thank Douglas McMeekin for his hard work and perseverance in creating FUNEDESIN. Our thanks also goes out to Claire Boswell and Marci Stoterau from MAP International, whose support was constant. The staff of the Mondaña Clinic was invaluable and incredible. We also want to thank Dr Peli Grosa from the University of Kentucky for help in editing this manuscript. Finally, our gratitude goes out to University of KY Basic Research Foundation who funded the trip to Ecuador.


Published 2 December 2003; style modified 23 July 2003.
This PDF has been produced for your convenience. Always refer to the live site https://www.rrh.org.au/journal/article/103 for the Version of Record.