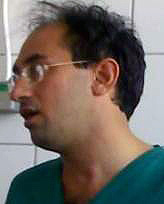 Prostate cancer (PC) is the most frequently occurring cancer among males in the Western world and the second most frequent cause of cancer death in this population after lung cancer1. Apart from the urinary tract obstruction, metastases and related disorders which occur in advanced disease, PC is usually asymptomatic. Because of this efforts to reduce associated mortality are based on early diagnosis and treatment. The available diagnostic tests include a digital rectal exam (DRE) and measuring the level of prostate-specific antigen (PSA).

Digital rectal examination was widely used to screen for prostate carcinoma in the pre-PSA era, and is still commonly used. The overall specificity, sensitivity and positive predictive values for DRE reported in published studies are significantly lower than those for PSA2. A DRE is also prone to subjectivity and has limited effectiveness in detecting small and anterior to midline lesions3. Moreover, in several studies DRE has not been found effective in preventing metastatic prostate cancer or death from prostate cancer. In the pre-PSA era the vast majority of tumors newly diagnosed by DRE were not organ-confined (and thus not curable)4. In addition, men's negative feelings and embarrassment related to DRE presents a barrier to screening worldwide5,6, with a high rate of DRE refusal recently reported in both rural and urban Greek male populations7. This prejudice occurs at all educational levels.

From 1990 the use of PSA testing has been approved for PC detection and is now widely used for screening. Being non-invasive, well accepted and much more sensitive than DRE, PSA has been gradually adopted for use in everyday practice. Over more than 10 years PSA testing has been performed on a million men worldwide. Using a cut-off value of 4.0 ng/mL to trigger biopsy, approximately 35% of these men have been found to have cancer on biopsy.

Since the introduction of PSA in the early 1990s, many trials and clinical studies have evaluated its use worldwide. The use of PSA has been shown to increase the PC detection rate with a shift to detection at earlier and less invasive pathological stages, overriding concerns about over-diagnosis and over-treating8. Other studies, however, have demonstrated a decrease in overall PC mortality of only 6%9. It is hard to attribute this decrease to PSA screening implementation, because the effect is too proximate to the use of the screening method. In addition, there is little correlation between this drop in mortality and the intensity of the PSA screening in various regions2.

The recently published results of the European Randomised Study for Screening of Prostate Cancer (ERSPC) confirmed both10. In summary, the ERSPC reported a relative PC mortality reduction of at least 20% by PSA-based population screening in 162 000 asymptomatic men aged 55-69 years. For every prevented PC death, 1410 men have to undergo screening, while 48 are needed to be treated in excess of the control group population to avoid one PC death.

In fact, PSA levels alone do not give enough information to distinguish between benign prostate conditions and cancer; the level of PSA may be high in men who have prostate cancer, an prostatic infection or inflammation, or benign prostatic hyperplasia. Other factors that influence the interpretation of PSA scores include age and the size of prostate. The PSA does not indicate how dangerous the cancer is; some PCs, particularly those of an aggressive nature, may not produce much PSA. In addition, PC is a highly unpredictable disease and current knowledge cannot always predict what type of cancer is present in any particular case. Some PCs become a serious threat to health by growing quickly to spread beyond the prostate gland, eventually causing death. Other PCs grow slowly and never become a serious threat to health or affect longevity.

Currently, there is no consensus among agencies that develop screening guidelines, and no standard recommendation for PC screening. The American Urological Association recommends PSA-based screening (with DRE) for men aged 50 years or older, and for men who have a life expectancy of at least 10 years. It is recommended that men with a family history of PC begin testing at an earlier age, despite hereditary factors being estimated to contribute less than 10% to the incidence of PC. In contrast, screening is presently discouraged by the EC Advisory Committee on Cancer Prevention because its negative effects are evident and its benefits are still uncertain11. According to the US Preventive Services Task Force, the evidence is insufficient to recommend in favour of, or against routine PC screening12. There are no official recommendations for PC screening by the European Association of Urology (of which is the Hellenic Urologic Association a member).

Even the American Cancer Society has modified its position on men eligible for PC screening from 'should undergo digital rectal examination and PSA testing annually' to 'recommends that both the PSA testing and digital examination be offered annually'13. Similarly, the American Academy of Family Physician and US Preventive Services task Force do not recommend routine screening in low-risk patients13.

There is general agreement that the benefits and risks of diagnostic procedures and treatment be taken into account when considering whether to undertake PC screening. However, men, particularly those aged over 50 years, believe in the benefit of early PC diagnosis, need to have a trustworthy test, and desire for reliable PC screening resembling the cancer screening available for women. The patient's anxiety about being screened for PC has a powerful influence on the screening decision of physician, whose clinical judgment might otherwise make them less inclined to order the test14.

Despite the controversy surrounding PC screening, the practice of opportunistic PSA screening is spreading widely, resulting in an increase of the annual PSA test rate15. At the same time, PC mortality worldwide is constantly decreasing. Based on the recently published results of the ERSPC (which showed a relative PC mortality reduction of at least 20% by PSA-based population screening) it can be assumed that this is attributable, at least in part, to the implementation of PSA screening.

This evidence suggests the existing large rural-urban inequality in PC mortality rates could be associated with a differing intensity of PC screening between in men in capital cities and those in regional and rural areas.

A large rural-urban cancer mortality inequality exists worldwide and, for PC, rural residents are certainly at higher risk16-21. Coory and Baade noted that in Australian regional and rural areas 110 extra deaths from PC occurred each year, and that this has been increasing over time22. It is not known if rural residency places men at higher risk of developing PC; however, race and family history, the established risk factors for PC, are equally distributed between rural and urban men23. Rural males are generally older, which may explain the disproportionate prevalence of PC among them, but it does increase rural disadvantage for PC mortality24.

It is generally accepted that patterns of cancer mortality reflect the basic characteristics of a society, such as life-style factors, population awareness, the accessibility of health care, and the efficiency of the healthcare system and screening programs. Of such life-style factors, specific elements such as smoking, energy intake, sexual activity, marital status, vasectomy, physical activity and anthropometry have shown inconsistent or negative associations with PC risk and mortality - or else there is very limited data available. In contrast, socioeconomic status and education level (both lower in rural populations), combined with limited PC knowledge 5,25, are more likely to be associated with the higher PC mortality rates of rural residents. Overall access to health care is a strong cancer mortality predictor, and this may have a prominent role in rural-urban inequality in PC mortality. Due to geographical limitations and limited transport options, many rural residents have limited access to clinics and hospitals with the advanced technology necessary for early cancer detection26.

Stage at diagnosis is a strong predictor of prognosis. For many cancers, early staging improves outcomes and is closely associated with population screening27-29. Several studies have analyzed the relationship between rurality and tumor staging and found rural residents to be at risk for late stage diagnosis, which significantly impacts cancer progression and outcomes30-32. The findings suggest that rural cancer patients are disadvantaged in this aspect. Given that rural residency has never been associated with exposure to a specific etiologic agent for most cancer types, it could assumed that the higher incidence of late-stage disease in a rural population reflects variations in screening service utilization. In confirmation, Koh et al demonstrated that rural origin is strongly associated with lesser probability of cancer screening uptake33. Studies in the US and Australia have also identified significant disparities in PC screening between rural and urban residents22,34. Although this does not seem to be universal, in most countries the probability of a man having a PSA test depends on where he lives. Because PSA utilization rates is inversely correlated with rates of late-stage disease, PSA effects would be mainly evident in urban areas. In contrast, diagnosis of PC in rural areas is often made at a stage when cure is not possible35.

To the authors' knowledge, because specialized services are unavailable in most rural areas, the efforts of rural health providers to diagnose malignant disease at a stage when cure is still possible are mainly based on screening. In addition, when GPs undertake screening, they make an important contribution to early cancer diagnosis36. Cepeda Piorno et al, who analyzed PSA determinations performed in the area of Gijon, Spain, found a greater incidence of cancer in rural areas, and found that diagnosis was commenced by a GP in 44% of cases, and in the remaining 56% by specialists37.

Other authors suggest that rural origin is not, of itself, a crucial negative cancer screening predictor, but an element of a much finer interplay of various factors38. It seems, however, that the causes of inadequate PC screening in rural populations vary among countries and continents. Generally the urban-rural differences in overall PC screening rates are more pronounced in countries without systematic screening programs26,35. More precisely, in New Zealand, rural residents have less education than urban residents and, therefore, the difference in PC screening rates could be attributed to their lack of knowledge about PC39. In the USA, rural residents are older, represent minority populations, or are low-income and thus use fewer screening services. Accessibility to health care is another barrier to PC screening for certain American rural residents, contributing to late-stage diagnosis and, subsequently, poorer survival rates34.

In summary, in many countries limited efficiency in healthcare systems and/or prohibitive costs of cancer screening, as well as limited geographic access to healthcare services and minimal transportation options contribute to the significant difference in overall cancer screening rates, in favour of urban residents5,17,22,36.

The persistence of a wide variability in PC mortality among urban and rural populations indicates a strong need to promote PC awareness in primary care. Primary healthcare providers should be trained in addressing issues related to PSA testing and early PC screening. Various forms of patient education, such as brochures and leaflets and traditional face-to-face patient-doctor communication, at the level of the primary health care may improve patients' knowledge about PC. In addition, access to health care should have a prominent place when developing systematic PC screening programs for rural populations.

At present there is insufficient evidence recommending the use of PSA as the only screening test for PC; thus, PC screening should be based on a combination of PSA testing and DRE. Finally, further research is needed to develop more effective methods for PC prevention and early detection services in rural populations.

2. Mistry K, Cable G. Meta-analysis of prostate-specific antigen and digital rectal examination as screening tests for prostate carcinoma. Journal of the American Board of Family Practice 2003; 16(2): 95-101.

12. Agency for Healthcare Research and Quality. The guide to clinical preventive services 2005: recommendations of the US Preventive Services Task Force. Rockville, MD: AHRQ, 2005.

21. Miller MK, Stokes CS, Clifford WB. A comparison of the rural-urban mortality differential for deaths from all causes, cardiovascular disease and cancer. Journal of Rural Health 1987; 3(2): 23-34.

This PDF has been produced for your convenience. Always refer to the live site https://www.rrh.org.au/journal/article/1227 for the Version of Record.