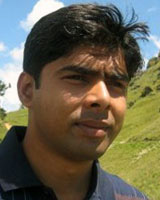 © Sandesh Pantha, Susanne Hutter, Pragya Gartoulla 2012 A licence to publish this material has been given to James Cook University, jcu.edu.au

The mountain district of Jumla is situated in the midwest region of Nepal, approximately 700 km north-west of the capital Kathmandu. Currently air transport is the only means of transport to and from the district due to the poor road conditions3,5. The majority of people in Jumla live in poverty line and there is a high prevalence of malnutrition5.

The International Nepal Fellowship (INF) is a non-government organization established in 1952. It has been involved in community health empowerment interventions and other development work in Nepal with the aim of achieving sustainable improvements in health and quality of life. In 2006, a 6 bed nutrition rehabilitation centre was established in its Jumla premises6. We recently studied the effect of nutritional rehabilitation among malnourished children in the INF centre.

In this hospital-based study, we retrospectively analyzed the data on 82 malnourished children admitted to the centre during the year July 2008 to June 2009. These children were provided with nutritional supplementation and treatment for co-morbid medical conditions free of cost.

Baseline information and anthropometric measurements were taken on admission. A rehabilitation officer evaluated the parents' understanding of healthy feeding and the current feeding practices in the family. Co-morbid medical conditions were addressed in collaboration with the medical officer from district hospital.

The average duration of inpatient stay was 14 days. Malnutrition was more prevalent in boys than in girls (1.8:1); however, due to gender discrimination in the community, boys were more likely to be presented for treatment than girls. The growth status of more than one-third of the children (35%) lagged by at least one year of age, and 6.2% children were 6 months behind their actual ages. Approximately 14% had edema at the time of presentation. Diarrheal diseases and acute respiratory tract infections were the leading co-morbidities among these malnourished children at 49% and 23%, respectively. There were two deaths (2.4%), both due to pneumonia.

The kin (usually, mother) of the malnourished children were shown how to make nutritious food from locally available resources and how to provide a balanced diet. Group discussions were conducted on malnutrition and its consequences and the importance of a balanced diet in childhood. For 5 months after discharge INF field workers followed up the children with 3 home visits to ensure effective implementation of the nutritional supplementation.

In summary, diarrheal diseases and respiratory tract infections form the leading cause of morbidity and mortality among malnourished children in Nepal. Rehabilitative services can effectively manage malnutrition and co-morbidities and also reduce mortality in these children. In addition, the provision of such services also provides an opportunity to teach parents and caretakers how to prepare nutritious food from locally available resources in a cost-effective and culturally acceptable way.

This PDF has been produced for your convenience. Always refer to the live site https://www.rrh.org.au/journal/article/2007 for the Version of Record.