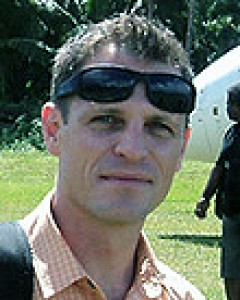 Solomon Islands is a sovereign country located 2000 km north-east of Brisbane and of the eastern tip of Papua New Guinea. The country consists of an archipelago of hundreds of islands spread over 11 000 km2. Makira-Ulawa is a remote province 200 km east of Honiara. It has a rapidly growing population of approximately 40 000 with an estimated fertility rate of 6.2 births per woman. Solomon Islands is a poor country with over 50% of its gross domestic income dependent on foreign aid. There are very few resources available for health care with just over AU$100 available for each person for health care or less than 2% of what is spent on health care in Australia.

KiraKira is the provincial capital of Makira-Ulawa province. It is a small rural township of approximately 3000 people1. It has the only hospital in the province, which is staffed by a single government-employed medical doctor, supported by approximately 40 nurses and midwives. There has been no previous published data on health outcomes in Solomon Islands outside of the National referral hospital in Honiara.

We performed a retrospective audit of hospital records of all births at KiraKira Hospital from 01/01/2011 to 19/09/2013 to calculate the incidence of low birth weight (<2.5 kg), prematurity (<37 weeks gestation) and proportion of women receiving antenatal care. In addition we undertook a cross sectional study of women presenting for routine antenatal care during a 2 week period in September 2013 that included urine analysis using Multistix 10SG (Elkart, IN, USA). Bacteriuria was defined as having >2 white cells identified in the urine. It was classified as symptomatic if there were associated symptoms including fever, abdominal and flank pain and dysuria. The study was approved by the Bond University Ethics Committee (approval no. BUREC RO 1708).

Table 1: Deliveries at KiraKira Hospital 2011-2013 compared with data from all Australian deliveries in 2011

Table 2: Sixty-three Melanesian women presenting for antenatal care during September 2013 in KiraKira Hospital compared with data for Australian women in 2011

This study has confirmed that there are high rates of teenage pregnancy, prematurity, low birth weight and perinatal mortality in KiraKira. The perinatal mortality rate of 31 per 1000 is more than double the rate of 14 per 1000 reported for Solomon in 2012 as part of the Millennium Development Goals project3. Aside from the obvious challenge of one doctor trying to provide health care for a community of 40 000 this variation is of concern. A possible explanation for this difference is that data from remote provinces was not available to researchers and the lower reported figure is based on outcomes achieved at the national referral hospital. If that were the case then the overall official figures for Solomon Islands are overly optimistic.

Asymptomatic bacteriuria is an important finding due to the complications it poses to the pregnant mother and the unborn child. Its presence carries a risk of pyelonephritis of up to 20-40% in the mother. It is also associated with increased prematurity and low birth weight. The United States of America Preventative Task Force recommends screening at 12-16 weeks5, as an intervention has been shown to greatly reduce low birth weight and prematurity. The results of this small cross sectional study provide data suggesting that screening the urine using a dipstick should become part of antenatal care in KiraKira.

Three-quarters of the pregnant women in this cross sectional study admitted to chewing betel nut. Betel nut is described as the fourth most used psychoactive substance globally (after tobacco, alcohol and caffeine). In addition to proven carcinogenic effects the chewing of betel nut during pregnancy has been shown to increase the incidence of low birth weight infants and also to increase rates of miscarriage, stillbirth, prematurity and fetal malformation6. There appeared to be lack of awareness among the women of KiraKira that betel nut poses any risks for the fetus. In KiraKira, betel nut use is nine times more prevalent than alcohol and tobacco use during pregnancy. Mothers should be encouraged to stop chewing betel nut during pregnancy as this habit is more than likely contributing to the very high rates of prematurity and low birth weight.

In summary, the findings of this study suggest that there are three low cost interventions that could be implemented in KiraKira that could reduce the rate of prematurity and low birth weight infants. First, pregnant women should be encouraged to attend for their first antenatal visit in the first trimester of pregnancy. Second, mothers should be screened for bacteriuria using a dipstick for urine analysis. Finally, pregnant mothers should be encouraged to stop chewing betel nut.

This PDF has been produced for your convenience. Always refer to the live site https://www.rrh.org.au/journal/article/3230 for the Version of Record.