Japanese regional-quota medical students in their final year are less motivated to work in medically underserved areas than they were in their first year: a prospective observational study 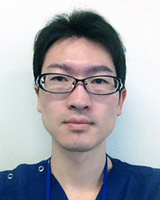 Kataoka Y, Takayashiki A, Sato M, Maeno T.  Japanese regional-quota medical students in their final year are less motivated to work in medically underserved areas than they were in their first year: a prospective observational study. Rural and Remote Health 2018; 18: 4840. https://doi.org/10.22605/RRH4840

This study was approved by the Ethics Committee of the Faculty of Medicine of the University of Tsukuba. The approval numbers were 21-413 and 21-413-2.

A shortage of rural physicians is a major problem for health systems in many countries1. In Japan, this issue has not yet been solved2. The maldistribution of physicians has been associated with many problems, including refusal to accept emergency patients3 and physician overwork4 in rural areas.

To increase the number of physicians in medically underserved areas (MUAs), the Japanese government initiated a special regional quota system, called chiikiwaku. Under this system, applicants to some medical schools are required to have graduated from a high school in the same prefecture. Implementation of the regional quota has been widespread since 2008; in 2016, the quota accounted for 15% of medical student entrants at 67 of 77 Japanese medical schools5. For most regional quota students, medical education is followed by an obligatory medical practice period of approximately 9 years in an MUA5. The practice location is determined by the medical school or the local government of the student’s home prefecture. Most regional quota students are required to take out a student loan but are exempted from repayment after fulfilling their obligation.

In the authors’ previous research, first-year regional quota students were surveyed regarding the motivations and associated factors for staying in MUAs after the obligatory practice period6. In that study, 52% of regional quota students anticipated being willing to remain in MUAs after their obligation was met. The factors associated with this willingness were rural upbringing, a passion to contribute to MUAs, external encouragement during medical school and perceiving the regional quota loan as having a strong influence on their work preferences.

Systems that are similar to the regional quota exist in other countries. For example, the National Health Service Corp (NHSC) in the USA has several types of programs such as scholarships and service-option loans to increase the number of rural physicians. One study reported about NHSC that 67% of those who accepted scholarships fulfilled their obligation to work in rural areas7. Some education programs recruit rural physicians without the use of scholarships, for instance the Physician Shortage Area Program and the Rural Physician Associate Program. Both programs have increased the retention rates of graduates8,9.

Although most regional quota graduates had not yet completed their obligatory practice period at the time of the present study, evaluating regional quota students during their senior year regarding their anticipated willingness to remain in MUAs long-term may be useful for planning ways to support them at an early stage. In addition, factors associated with this willingness could suggest ways of improving the selection criteria of the regional quota system.

This study aimed to clarify sixth-year (final-year) regional quota students’ anticipated willingness to remain in MUAs after their obligatory practice period and the factors associated with this willingness as assessed during the students’ first year.

This was a prospective observational study. All regional quota students at Japanese medical schools whose deans agreed to allow student enrollment in the survey were included. Students who did not answer the question about the primary outcome were excluded. In this study, the regional quota was defined as a special quota system requiring obligatory medical practice in MUAs after graduation, regardless of the length of the obligation or the student loan amount. This definition is the same as that used in the authors’ previous study6. Baseline data were collected during students’ first year, from September 2010 to February 2011. Follow-up data were collected during students’ sixth year, from August 2015 to January 2016.

Self-report questionnaires were used in both the baseline and follow-up surveys. The methods of distributing and collecting the questionnaires were the same as in the previous study6. The questionnaire used in baseline survey collected demographic information such as sex and hometown type, the latter defined by scale (metropolis, suburb of metropolis, city, town or village and remote area). Subjects were also asked to rate on a five-point Likert scale the degree to which they experienced external encouragement (whether they felt that admission based on a regional quota was encouraging their studies) and stress (whether they felt that obligatory practice and/or loan repayment was stressful) related to the regional quota status. Regarding factors influencing future work preferences, the questionnaire asked about preferred location type, number of working hours and call frequency, for example. The influence of these factors on work preferences was assessed based on the subjective judgement of respondents using a five-point Likert scale. Most of the questions were the same in the baseline and follow-up surveys. Sixth-year regional quota students’ anticipated willingness to remain in MUAs after their obligatory practice period was the primary outcome, and was assessed using a five-point Likert scale (‘very willing’, ‘somewhat willing’, ‘neither willing nor unwilling’, ‘somewhat unwilling’ and ‘completely unwilling’). Baseline survey questions were described in the previous study6. Student identification numbers were used to link the data in the baseline and follow-up surveys.

Participants were categorized into two groups (willing and unwilling) for the primary outcome. The willing group consisted of participants who reported that they were ‘very willing’ or ‘somewhat willing’ to remain in MUAs after the obligation period. The unwilling group consisted of participants who answered ‘neither willing nor unwilling’, ‘somewhat unwilling’, or ‘completely unwilling’. To identify factors associated with the anticipated willingness to remain in MUAs, a univariate analysis was performed using the Χ2 test. Independent variables included demographic characteristics, stress and external encouragement related to the regional quota status, the primary reason for applying for the regional quota, factors influencing work preferences, and first-year students’ anticipated willingness to remain in MUAs. These variables were collected during the baseline survey. Independent variables were all categorical and were dichotomized using the same cutoffs as used in the previous study6. Regarding the influence of factors on work preferences, the cutoff for each factor was between ‘large influence’ and ‘small influence’ of a 5-point Likert scale. The Likert scale consisted of ‘very large influence’, ‘large influence’, ‘small influence’, ‘tiny influence’ and ‘no influence’.

The cover page of the questionnaire stated that the information gathered in the survey did not affect the student’s academic record. Students were asked to submit completed questionnaires in a sealed envelope provided by the researcher. This study was approved by the Ethics Committee of the Faculty of Medicine of the University of Tsukuba. The approval numbers were 21-413 and 21-413-2. 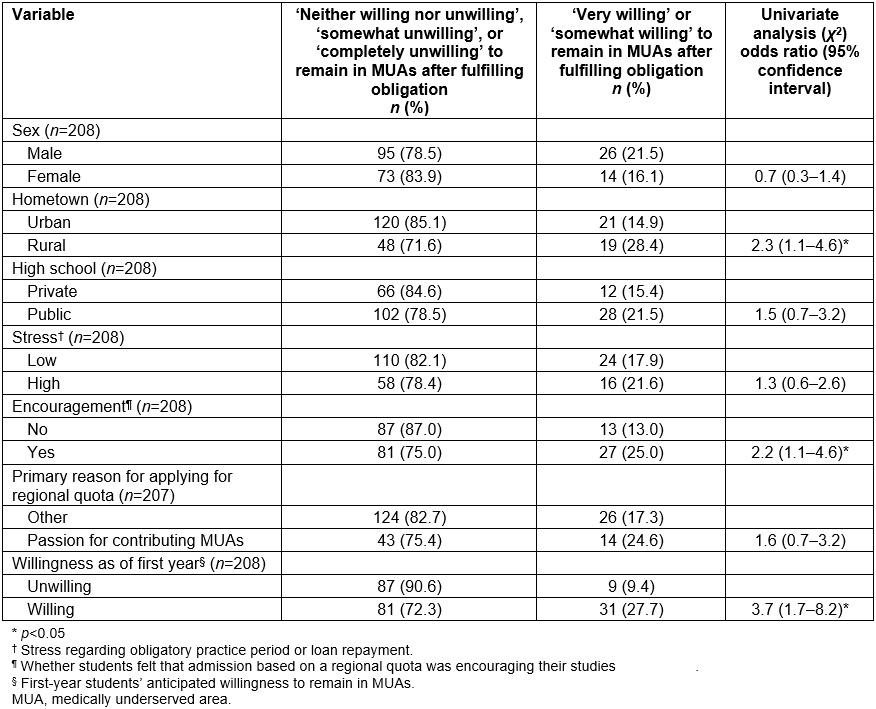 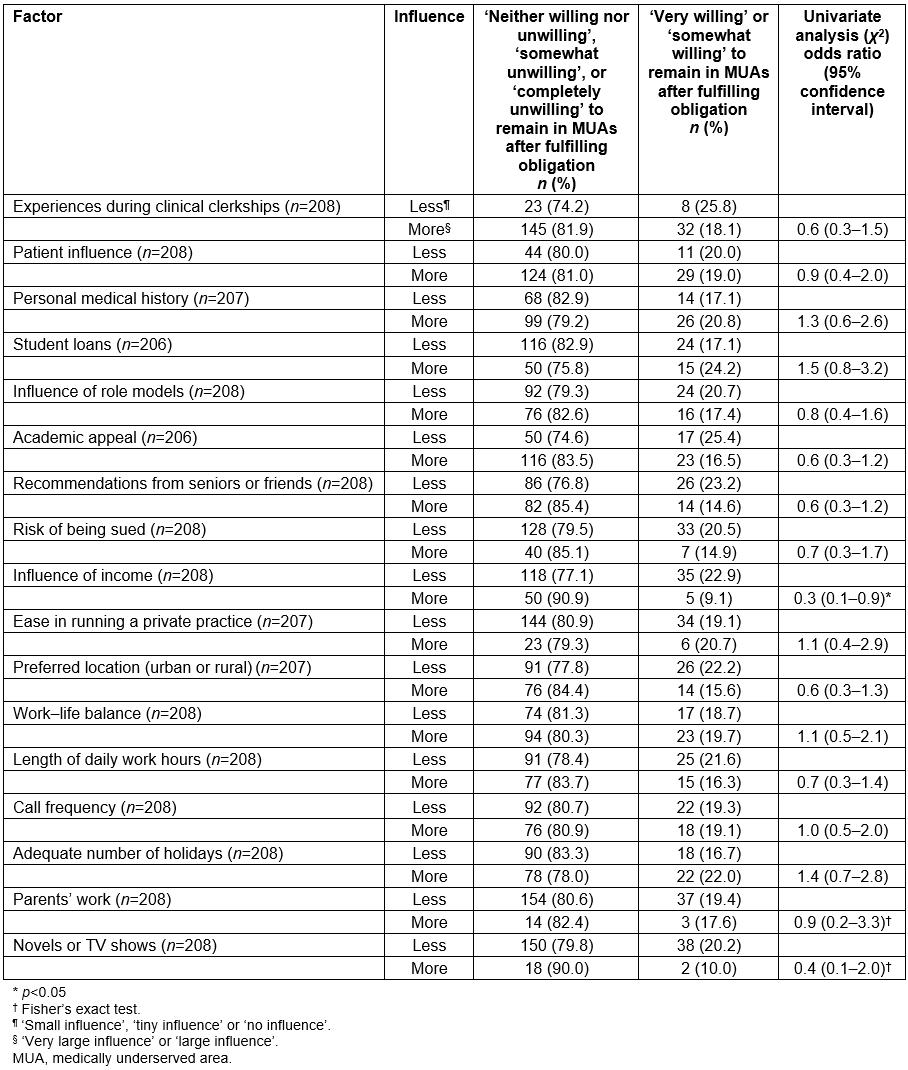 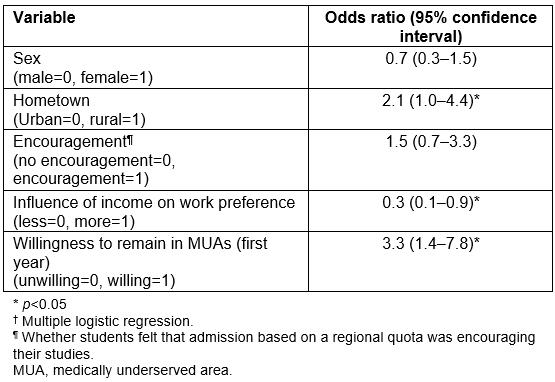 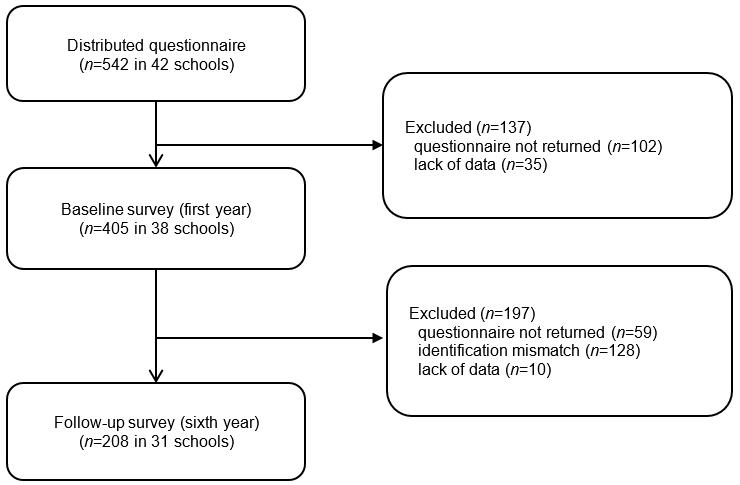 During their first year, 52% of regional quota students were ‘very’ or ‘somewhat’ willing to remain in MUAs after their obligatory practice period, but this proportion declined to 20% by the time students reached their sixth year. Factors associated with sixth-year students’ anticipated willingness to remain in MUAs were rural upbringing, influence of income on work preference and anticipated willingness to remain in MUAs during their first year. These factors were reported by previous studies to be related to working in rural areas or MUAs.

Previous cross-sectional studies10,11 showed that medical students in their junior (first or second) year had great interest in rural medicine. Some cohort studies reported the proportions of medical school graduates who remained in rural areas after a special program8 or medical school12 to increase the number of rural physicians, but few cohort studies have assessed undergraduate students across multiple schools in terms of their intention to remain in MUAs or rural areas. The cause of the decrease in anticipated willingness to remain in MUAs from the first to the sixth years was not clear in this study, but medical students have been shown to change their views of their occupations as physicians after their clinical clerkships13,14. Colwill indicated that the curriculum in medical schools focused on biomedical sciences and hospital-based specialties15. This perspective has not yet changed16. This academic milieu may decrease interest in rural medicine or ‘primary care’-based specialties during undergraduate education. Students may be more influenced by urban doctors than rural doctors since most clerkships in Japanese medical schools take place at tertiary care facilities in urban areas17. Career choice can also be influenced by debt load17,18, concern about lifestyle19 and burnout20. Rural physicians, especially primary care physicians, have lower incomes than other specialists21, which may make rural work unattractive to medical students who place significant importance on salary and control over work schedule22. In addition, empathy for patients is essential to physicians including rural doctors, but empathy declines among medical students over the course of medical school23.

Rural upbringing was associated with rural recruitment24,25 and retention12 in several studies. The present study also showed an association between rural upbringing and anticipated willingness to remain in MUAs. Selecting rural students for regional quotas might help increase the number of well-motivated students who remain in MUAs after their obligatory practice period. Kawamoto et al11 showed that medical students who placed importance on their expected income were less motivated to practice in rural areas. Such students may prefer urban life and the greater variety of ways to spend their incomes. Regional quota students’ anticipated willingness to remain in MUAs was much lower in their sixth year than their first year, but there was a significant association between the two time points. This finding is consistent with the concept of the rural pipeline26; to increase the rural medical workforce, it is important to select rural students and support them in maintaining their motivation to work in rural areas. Undergraduate medical education tends to emphasize tertiary care27, but it should focus more on primary care or community medicine to foster community doctors.

In the authors’ previous study, rural upbringing was associated with first-year students’ anticipated willingness to remain in MUAs6; this factor seems important regardless of when students are assessed. On the other hand, a passion to contribute to MUAs as the primary reason for selecting the regional quota, external encouragement during medical school and perceiving the regional quota loan as having a strong influence on work preferences were not significantly associated with the anticipated willingness to remain in MUAs during sixth year. This may be because regional quota students’ viewpoints regarding student loans or obligatory practice change during medical school.

Regional quota students’ motivation to remain in MUAs decreased as they progressed through medical school. The present results suggest that to increase the number of physicians in MUAs, it may be important to recruit regional quota students who grew up in rural areas, who are not interested in expected income and who anticipate a willingness to remain in MUAs at the time of admission.

24 Brooks RG, Walsh M, Mardon RE, Lewis M, Clawson A. The roles of nature and nurture in the recruitment and retention of primary care physicians in rural areays: a review of the literature. Academic Medicine 2002; 77(8): 790-798. DOI link

28 Takayashiki A, Kobayashi S, Maeno T, Abe T. Medical students' preference to engagement in the practice in physician underserved areas; the comparison between 'Chiikiwaku' entrants and others. In: Proceedings, The 44th Annual Meeting of the Japan Society for Medical Education; 27-28 July 2012 Yokohama, 2012.

This PDF has been produced for your convenience. Always refer to the live site https://www.rrh.org.au/journal/article/4840 for the Version of Record.