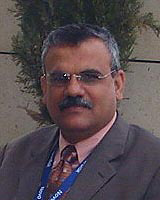 © Abbas Mansour, Aymen A Al-Hassan, Meelad I Al-Jazairi 2007 A licence to publish this material has been given to ARHEN, arhen.org.au

Background: The determination of cutoff points for healthy waist circumference (WC) is of paramount importance for prevention, optimum management, and prognostication of obesity, the metabolic syndrome (MetS), type 2 diabetes mellitus, and coronary heart disease. The aim of this project was to establish the cutoff level for WC in rural Basrah in Iraq, one of the eastern Mediterranean and Middle East (Arab) populations.
Methods: This was a community-based, cross-sectional survey for establishing the normal value for WC among a rural district population in Basrah (Abu-Al-khasib), Iraq. A stratified sampling procedure was used for sample selection.
Results: The cutoff level yielding maximum sensitivity and specificity for predicting the presence of multiple risk factors was 97 cm in men and 99 cm in women. Sensitivity and specificity using these cutoff values were 70% and 50%, respectively, in men and 70% and 45%, respectively, in women.
Conclusion: We propose the optimal cutoff point for WC for the diagnosis of MetS in the Iraqi adult rural population as 99 cm in women and 97 cm in men.

The determination of cutoff points for healthy waist circumference (WC) is of paramount importance for prevention, optimum management, and prognostication of obesity, the metabolic syndrome (MetS), type 2 diabetes mellitus, and coronary heart disease1. This use of WC has gained popularity in recent years2. It is increasingly being accepted as the best anthropometric indicator of abdominal adiposity3 and is one of the five anthropometric indices for diagnosing obesity4. Furthermore it is a better index than body mass index (BMI) as a measure of obesity5-7.

The heterogeneity in composition of abdominal tissue, in particular adipose tissue and skeletal muscle, and their location-specific and changing relations with metabolic factors and cardiovascular risk factors in different ethnic groups, do not allow a simple definition of abdominal obesity that can be applied uniformly. In particular, Asians appear to have higher morbidity at lower cutoff points for WC than do Caucasians5-7.

Increased WC represents increased abdominal fat or visceral fat. Visceral fat is notably mesenteric fat, which is drained by the portal circulation and plays a critical role in the pathogenesis of MetS through increased production of free fatty acids, cytokines and vasoactive peptides8. It is not the obesity in itself that is an important risk factor for cardiovascular disease; it is the site of the obesity that matters9. For practical purposes, for the assessment of WC, a simple pocket tape measure is all that is needed10.

The International Diabetes Federation (IDF) definition of MetS considers WC to be ethnically specific and strongly recommends that more extensive investigations should be performed before suitable cutoff levels are established for use in clinical practice11.

The aim of this project was to establish the cutoff level for WC in rural Basrah in Iraq, one of the eastern Mediterranean and Middle East (Arab) populations.

This was a community-based cross-sectional survey for establishing ethically appropriate WC cutoff values for central obesity in Iraqi adults from a rural district in southern Iraq, Basrah (Abu-Al-khasib). We chose this district from Basrah because the area was stable and without the extensive migration which faces many Iraqi districts at the present time. A stratified sampling procedure was used for sample selection for this household survey carried out by trained physicians (women were measured by a female nurse). The study was conducted during a home vaccination program from January to April 2006. Informed consent was obtained from participants. Ethical approval was obtained from the Ethics Committee of the Basrah College of Medicine, Iraq.

The WC was measured once in centimeters5,10,12-16 using a plastic anthropometric tape from the horizontal plane at the umbilical level. Measurement was made with the participant standing erect, abdomen relaxed, arms at the side and feet together with weight equally divided over both legs. Participants were told to breath normally and to breath out gently at the time of measurement and not to hold in their abdomen or hold their breath. Blood pressure was measured in a seated position after 5 min at rest, three times. The average of the second and third readings was defined as the subject's blood pressure.

Each subject's blood was sampled: 10 mL was drawn into a disodium EDTA tube after the subject had fasted for at least 10 hours. The sample was kept at room temperature and centrifuged within 1 hour. Glucose was measured by the glucose oxidase method. Serum total cholesterol, high density lipoprotein (HDL) cholesterol, and triglycerides (TG) were measured by the enzymatic method. Low density lipoprotein (LDL) cholesterol concentrations were calculated using the Friedewald formula17.

The data analysis was performed separately for men and women. All data were analyzed by SPSS, version 9.0 (SPSS Inc, Chicago, IL; www.SPSS.com) in 2006. The receiver operator characteristic (ROC) curve for WC to predict the presence of two or more risk factors for MetS as defined by IDF was plotted. The WC value was calculated by plotting the true positive rate (sensitivity) against the false-positive rate (1-specificity).

The ROC curves were plotted to determine cutoff values for WC in relation to the detection of multiple risk factors for the Iraqi population (Figs 1,2).

Figure 1: The receiver operator characteristic (ROC) curves for waist circumference to predict the presence of two or more risk factors of the metabolic syndrome, as defined by the International Diabetes Federation for males.

Figure 2: The receiver operator characteristic (ROC) curves for waist circumference to predict the presence of two or more risk factors of the metabolic syndrome, as defined by the International Diabetes Federation for females.

Since 1998, six definitions for MetS have been proposed. MetS was first proposed as a unique syndrome in 198818, and the first WHO definition was in 199919. In the same year the European Group for the Study of Insulin Resistance (EGIR) defined the 'insulin resistance syndrome' (IRS) as a condition characterized by hyperinsulinaemia in addition to two or more of the following components: hyperglycaemia, hypertension, dyslipidemia, and central obesity20. Two years later in the Third Report of NCEP Expert Panel on Detection, Evaluation and Treatment of High Blood Cholesterol in Adults (Adult Treatment Panel III), MetS was given another definition12. In 2005 the American Heart Association and the National Heart Lung and Blood Institute proposed that any three of five criteria constitute diagnosis of MetS: elevated WC, elevated TG, reduced HDL-cholesterol, elevated blood pressure, elevated FPG21. In the same year the IDF established that the definition of MetS must be based on the presence of central obesity plus any two of the following four factors: raised TG level, reduced HDL-cholesterol, raised blood pressure, raised FPG (or previously type 2 diabetes)11.

The IDF proposed that central obesity, as assessed by WC cutoff values specific for ethnicity and gender, is mandatory for a diagnosis of MetS. A prominent feature of the IDF definition is that central obesity is an essential, not an optional, component of MetS - and that its value should be ethnic specific.

In Iraq, the only previous study associating a cutoff point for WC in men with increased risk of type 2 DM and hypertension, suggested values of 90 cm and 95 cm, and for women, 91 cm and 95 cm, respectively22. The WC cutoff point for our population was 99 cm in women and 97 cm in men. The cutoff point for women was higher than in men, as had previously been reported in Japan16. These data will allow us to study the prevalence of MetS in Iraq with far greater accuracy.

One of the limitations of our study was the small sample size. However the geographical location of the sample in Abu-Al-khasib district in Basrah suggests that the population involved was representative of Iraqi population. Nevertheless, a larger study that includes urban people should be undertaken in the future, when the geopolitical situation is more stable. The second limitation involved the body site for measurement of WC. We measured according to the IDF recommendation11 at umbilical level. This is thought to be several centimeters longer than a measurement at the 'mid' level in women; however, values measured at the 'mid' and umbilical levels tend to be very similar in men23.

In conclusion, in the present study, we proposed an optimal cutoff point of WC for the diagnosis of MetS in the Iraqi rural adult population as 99 cm in women and 97 cm in men.

20. Balkau B. Frequency of the WHO metabolic syndrome in European cohorts, and an alternative definition of an insulin resistance syndrome. Diabetes/metabolism Reviews 2002; 28: 364-376.

23. Wang J, Thornton JC, Bari S, Williamson B, Gallagher D, Heymsfield SB et al. Comparisons of waist circumferences measured at 4 sites. American Journal of Clinical Nutrition 2003; 77: 379-384.
This PDF has been produced for your convenience. Always refer to the live site https://www.rrh.org.au/journal/article/765 for the Version of Record.