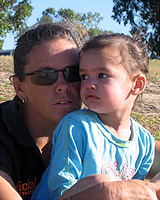 © Juli Coffin 2007 A licence to publish this material has been given to ARHEN, arhen.org.au

I have watched in silence and amazement as the last few weeks have unfolded and the Prime Minister of Australia has sent the army into Aboriginal communities with the expressed purpose of removing children. What is portrayed yet again is a basic lack of social and structural understandings of an Aboriginal context, and the never-ending attraction of the 'quick fix' to a multi-layered and complex issue. I would like raise a number of points about just one aspect of what appears to be the 'Howard plan' - that is the child-centred argument.

When families are involved in cyclic behaviours such as alcohol or drug dependency sometimes it is the fact that the children are present that keeps people getting out of bed at all. Children are central to our culture and removing them for short periods will not necessarily protect them. During school holidays, vacations and at other times, children will still be placed back into an unchanged environment. Will it make a difference to threaten families, for example, with the prohibition of alcohol or with taking their kids away? How could these measures be policed correctly? Who will actually do the decision-making about who goes where and for how long? If people feel they need something to survive they will get it at any cost - I know, I have lived on a 'dry' community. There will be no change.

And what do our kids have at the end of their twelve years of schooling? What do they have to really look forward to? Ask an Aboriginal person who is trying to turn their life around and get a job about red tape and police clearances. We will end up with yet another sub-group of dislocated adults in years to come. What about the kids who do not want to leave and would rather put up with their world view of what they know, even with the poverty and hardships, than go to a residential home?

I do not enjoy seeing children not being looked after, but I feel more sad to see families in pain and suffering. Its amazing how many so-called dysfunctional family groups and communities have never been asked their story, or who have told their plight continually to many officials only to see no change over ten years. It's a wonder that people turn up to any meetings at all... ever.

Yes, make some radical changes but do it with the whole community, the whole family, the child's whole world. Recognise that the consequences of years of oppression and hopelessness will not disappear overnight. Ask yourself, if you woke up one morning and had no hope, no purpose and now no family or lands around you, would you really be able to function? The government failed long ago to make basic changes to the way the social services, medical and health services, schools and housing systems are run for our communities, why come in now and just remove the very thing that offers us some hope, some future, some stability - our kids.

This PDF has been produced for your convenience. Always refer to the live site https://www.rrh.org.au/journal/article/825 for the Version of Record.