Memories of being a rural doctor's son 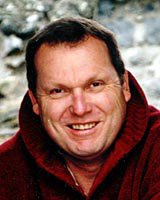 © Philip Reid 2004 A licence to publish this material has been given to ARHEN, arhen.org.au

As a young lad in the 1960s, I often ended up in the car with my father Dr Dick Reid (Fig 1) as he did his weekend ward rounds at Kalgoorlie District Hospital (KDH). The car used to turn right over the railway bridge and down the hill past the hospital laboratory before turning left into the main entrance on St Alban's Road.

Dad was 32, and had left a general practice post in Kent in the UK when he came to Kalgoorlie with a wife and two children. He had chosen to emigrate and answered an advertisement in the British Medical Journal for a practice in Boulder, Western Australia. We came out as 'ten-pound tourists' on the SS Otranto docking in Fremantle in the summer of 1956. I was two and a half years old when we arrived. My mother told me I hated blowflies and that the heat was extreme that summer of our arrival.

Dad joined Dr Hugh Fletcher-Jones at 19 Moran Street in Boulder. Dad's forte was anaesthetics and he spent long hours in the un-airconditioned theatres at KDH. In those days St John of God Hospital, Kalgoorlie was in existence and quite a lot of the private work was done there. I remember the smell of ether and peppermints when Dad came home after a long list at the hospital.

Going to the St John's Hospital was fun for the Doctor's son. Sr Chanel would open the kiosk and give me an ice-cream in a cone. The St John's nuns wore white habits with a large piece overhanging from the forehead like a bullnosed verandah. I worried that they would feel so hot in the summer. There were lay nursing staff at St John's as well and they were very much controlled by the nuns.

I remember being admitted to St John's with an infected finger and had an abscess drained under GA by Dr Fletcher-Jones. Dr Stan Webster 'put me to sleep'. Anyway I had a great time in hospital post-operatively and did not want to go home much to my mother's amusement.

My Dad still introduces me as 'my son Phil' followed with, 'Did you know he was a bugger of a kid!' This refers to my breath-holding aged 2-3 years and my penchant for wandering off without telling mother where I was going and when I would be back. On one occasion, as a young tyke, mother was about to call in the police when she found me asleep under the spare bed on the side verandah of the house. I was keen on lighting fires too and remember a pile of dry leaves causing me some alarm as the flames raged towards the side of the family home.

We went everywhere on bikes as children in those days. To school, to the pool and to the slime dumps. Slime dumps were the piles of waste generated by the refinement of gold bearing ore. They towered over the skyline of the Golden Mile which set a backdrop to the towns of Kalgoorlie and Boulder. Riding your bike home after school over the slime dumps was a great thrill, an obstacle course and danger all thrown into one. Some of the uphill slopes culminated in old mine workings and the trick was to do a full circle of these before descending at breakneck speed down the other side. The most dangerous and daring thing I ever did was to climb the disused smoke stack of the Boulder Power Station. I did this one morning while my little brother Richard watched. The rungs were set into the mortar and some of them were loose and pulled out as I climbed. Richard was terrified and begged me to come down. I got to the top and sat with my legs over the rim of the summit and it was a great view. I get the creeps when I think of it now.

Old Mrs Softley was one of the civilian widows (ie not a war widow). She babysat for Mum and Dad often. She came over one winter's evening and was knitting by the fire when I asked if I could make her some tea. She murmured, 'That would be nice dear'.

I went out to the kitchen and the embers of the Metters stove were still glowing. I stacked in some more wood and blew. No flames. Being a 'bugger of a kid' I decided an accelerant would be in order. So I climbed up to the top of the kitchen dresser and found a bottle of white spirit. This was poured in through the top of the stove resulting in a tremendous explosion which singed my hair, eyelashes, eyebrows and burnt my hands.

I went into Mrs Softley and reported the situation. Dad was summoned and I was taken down to the surgery for tulle-gras dressings and came home swathed in bandages. I smelt of burnt flesh and hair. I suffered superficial burns to my hands and face and these healed without scarring. And although I never really developed any eyebows, I think this is a family trait in the males and can't really blame the burns for that. Mrs Softley never fully recovered from the experience.

My doctor in those days was Dr Pat Shanahan. He practised in Boulder near the Catholic church. He was an imposing man and was widely respected by his colleagues and the community. Dad said Pat was a high jump champion at school. When he had had a few beers at the Hannan's Club, Pat had a party trick. He could jump onto the bar from a standing start.

Dad still refers to Pat Shanahan as being his mentor when he was a Kalgoorlie doctor. This meant that there was always someone for him to talk to about difficult cases. Dad tells me that Pat Shannhan was especially trained to be a country doctor with extra training in surgery and obstetrics.

On reflection, country doctors in those days did not have the luxury of a quick Royal Flying Doctor Service retrieval for critical patients. So Pat Shanahan could enucleate an eye, drain a subdural haematoma and operate proficiently on an acute abdomen. He was also known as the 'toe-cutter'. For example, there was a practice in Kalgoorlie with two doctors who put a lot of their patients on digoxin for unjustifiable reasons. The patients were instructed to attend daily to have their pulses checked. Each time a fee was charged. It soon became known among the medical fraternity that this was going on. Pat Shanahan was dispatched to deal with it - and he did.

Pat was heard to advise the young Dr Dick Reid, 'Dick, the secret to being a good GP in this place is to know who's up who!' Never was a truer word said. It has sometimes taken me 10 years to realize that Jane, for example, is Jim's sister.

The male role model that fathers provide has been rediscovered in Australia recently. I was lucky enough to have grown up in a household with a guiding light (Fig 2). I refer, of course, to Dad. I sat and listened for hours at the kitchen table to his worries and his triumphs. The education of boys has shown that they do best with strong male role models. I had this with my father and luckily I was able to follow on. 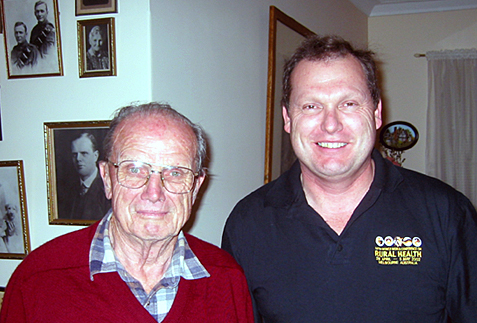 Figure 2: Father (Dr Dick Reid) and son (Dr Phil Reid) with a photo of Dr James Reid in the background (James, Phil's paternal grandfather, was a country doctor in Oxfordshire UK, in a town called Banbury - as in the nursery rhyme 'Ride a cock horse to Banbury Cross').

One Christmas morning I rang Dad to wish him a happy Christmas. I asked him what he was doing. He said he had been rung by a nursing home. Would he come and see an old boy who suddenly could not hear? So, on Christmas Day, Dad went over and syringed the man's ears of wax.

I said, 'Come on Dad couldn't that have waited?'

The reply came back, 'He wouldn't have enjoyed his Christmas lunch if he was deaf, son'.

Dad continues to remind us that coming to Australia was the greatest decision he ever made. At his 80th birthday recently Dad said he arrived in Fremantle with a wife and two kids, a new car on hire purchase and five quid left in his pocket. He got a twenty-five pound advance from the bank to get us from Perth to Boulder. His leap of faith was rewarded when 3 months after joining the practice in Boulder, Dad received his first fee of thirty shillings and sixpence for an anaesthetic he had given at the hospital.

Dad's prowess as a doctor was recognized some years ago when he was awarded the OAM for services to general practice and sport. I went with my family to Government house to see the guiding light get his reward. Good on you Dad!
This PDF has been produced for your convenience. Always refer to the live site https://www.rrh.org.au/journal/article/294 for the Version of Record.