The Taiwan government and scholars in the field of health policy have long been concerned about the issues of health care among indigenous people and those living in remote areas or on isolated islands. Various factors including geographical barriers, health policies, health insurance, medical education, differences of culture background, gross domestic product and government financial allocation have impacts on the medical resource insufficiency and healthcare provision to these areas. Among these, the shortage of personnel in the healthcare workforce, especially physicians, and the lack of subspecialty services have been the most important factors influencing the provision of health care to these underserviced areas. To improve the shortage of healthcare human resources in such areas, various undergraduate rural-oriented clinical programs and different financial-incentive programs focusing on several strategies aiming to recruit and nurture students have been implemented worldwide1-5. In 1969 the Department of Health (DOH) of Taiwan initiated a government-subsidized program with service-requiring scholarship to nurture medical students and nurses from remote areas and isolated islands, and 206 medical students have since been recruited from these areas and have graduated. However, only 62% of physicians continue to practice and serve in their designated area. More than one-third of subsidized physicians leave after completing their term of service by contract with DOH6. Lack of training and planning in career growth has been the major cause of the low retention rate of healthcare human resources in these underserviced areas, especially in the remote and isolated islands6,7. Improving the retention of subsidized physicians and other healthcare professionals to provide sufficient healthcare human resources to these underserviced areas has remained an important issue in health policy-making for the Taiwan government.

Organizational commitment, a psychological state of binding the individual to the organization8,9, and professional commitment, one’s belief in and acceptance of the values of a chosen occupation10, have been a continual focus in the field of human resource practice in recent years11-13. Many studies have shown employees with higher commitments in both organizational and occupational form have better work performance and lower intention to leave14-16.

Meta analysis performed by Meyer et al21 found that normative commitment is a strong and reliable factor to predict employees’ attitude, intra- and extra-role behaviors, and these findings are also supported in later research22,23. In addition, normative commitment can accurately predict higher job satisfaction13,21 and intention to leave12,13,22.

Perceived investment in employee development (PIED) refers to employees’ perception about their organizations’ commitment to develop their new skills and competencies24. The central theme of investment in employee development is to equip employees with higher levels of knowledge and skills, ensure job readiness and motivate task performance25,26. When employees perceive that organizations will help them to learn new knowledge and obtain new skills and competencies, they are willing to commit and devote themselves to their work, which in turn increases organizational performance. It has been used as a high commitment strategy to motivate employee commitment and to enhance employee productivity and financial performance across various industries25,27. It is an important human resource practice in developing and maintaining employee knowledge, skills, and abilities in the process of organized learning27. In addition to enhancing employee work performance (eg organizational commitment, job involvement and job satisfaction), investment in employee development also offers organizations a competitive advantage through enhancing organizational continual learning to acquire new skills and competencies25,28.

Based on this brief literature review, the authors argue that government investment in the development of healthcare workers’ knowledge and competencies is important to enhance their professional and organizational commitment and subsequently decrease their intention to leave underserviced areas. The authors consider that healthcare workers in underserviced areas would be more willing to stay and be more committed to their profession to provide healthcare services when they perceive PIED than those who don’t perceive.

In this study, the government was considered an organization and healthcare workers in an underserviced area were considered employees. The authors hypothesized that the higher the perception of government’s investment in employee development that healthcare workers have, the higher their organizational and professional commitment and the lower their intention to leave.

The underserviced areas of this study was defined according to the criteria of the DOH, Taiwan, which include 30 townships in mountainous areas, and 18 townships in the isolated islands. A well-organized questionnaire including factors of PIED, professional normative commitment and intention to leave were sent to 692 healthcare workers of health centers in the 48 health centers of these townships.

Structural equation modelling with analysis of moment structures (AMOS) was used to examine the applicability of the hypothesized structural model. As a preliminary step in the analyses, the authors conducted the confirmatory factor analysis (CFA) to examine each scale. In order to maintain the principle of theoretical consistency and parsimony, the items were eliminated according to the modification index provided by AMOS to build a valid construct29. Several goodness-of-fit indices were used to assess the model fit of each variable30. Finally, construct reliabilities were calculated. For the construct reliability, values of 0.5 or above are acceptable. This step is necessary to ensure that the latent variables are adequately representing the observed variable.

Perceived investment in employee development: Perception of investment in employees’ development was measured using PIED24. PIED is a nine-item questionnaire, which covers dimensions including skill training, career counseling, organizational support and information providence for employees. After conducting the CFA, there are five items left for the scale. The results of the CFA show the scale has good model fit: c2=22.826 (degrees of freedom (df)=5), goodness of fit index (GFI)=0.985, non-normed fit index (NNFI)=0.980, root mean square error (RMSEA)=0.076, standardized root mean square residual (SRMR)=0.0179. Values of RMSEA greater than 0.05 and less than 0.08, SRMR less than 0.05, and GFI and NNFI greater than 0.90 indicate a model with acceptable fit. The value of construct reliabilities is 0.9001 and the value of average variance extracted is 0.6441. The Cronbach’s α of PIED is 0.898. The results show the scale is acceptable.

Professional and organizational commitment:  Occupational normative commitment was measured using Meyer et al’s six-item professional commitment instrument10. After conducting the CFA, there were four items left for the scale. The results of the CFA show the scale had good model fit: c2=16.320 (df=2), GFI=0.987, NNFI=0.934, RMSEA=0.108, SRMR=0.0351. Values of RMSEA greater than 0.10, SRMR less than 0.05 and GFI and NNFI greater than 0.90 indicate a model with acceptable fit. The value of construct reliabilities was 0.7672 and the value of average variance extracted was 0.4624. The Cronbach’s α of occupational normative commitment was 0.752. The results show the scale was acceptable.

Intention to leave:  Intention to leave was measured by a four-item scale, which covered the concept of leaving an organization and a profession31,32. The results of the CFA show the scale had good model fit: c2=4.029 (df=2), GFI=0.991, NNFI=0.988, RMSEA=0.087, SRMR=0.0210. Values of RMSEA greater than 0.08 and less than 0.10, SRMR less than 0.05, and GFI and NNFI greater than 0.90, indicate a model with acceptable fit. The value of construct reliabilities was 0.8003 and the value of average variance extracted was 0.5039. The Cronbach’s α of intention to leave was 0.797. The results show the scale was acceptable. Sample statements are ‘I am serious thinking about quitting my healthcare profession and ‘I am seriously thinking to leave this organization’.

To test the mediating effect of normative commitment on the relationship between PIED and intent to leave, structural equation modeling was performed. The path results and model fit are shown in Figure 1 and Tables 3 and 4. In Figure 1, the factor loadings of all the observed variables show their t values are greater than 1.96 and reach the significance level (p<0.001). It indicates all the observed variables can effectively reflect the latent variables formed by them. Table 3 presents the parameter estimates and model fit index in both government-subsidized and non-government-subsidized samples. Table 4 presents the direct, indirect and total effects between PIED, PNC, ONC and intent to leave. In these government-subsidized individuals, the results showed there was a complete mediating effect of dual normative commitment on the relationship between PIED and intention to leave. However, there were both direct and indirect effects on their intention to leave in those individuals without government subsidy.

Table 3:  Model fit index of the standard error of the mean of interrelationships between perceived investment in employee development, and the professional normative commitment and intent to leave constructs across two samples 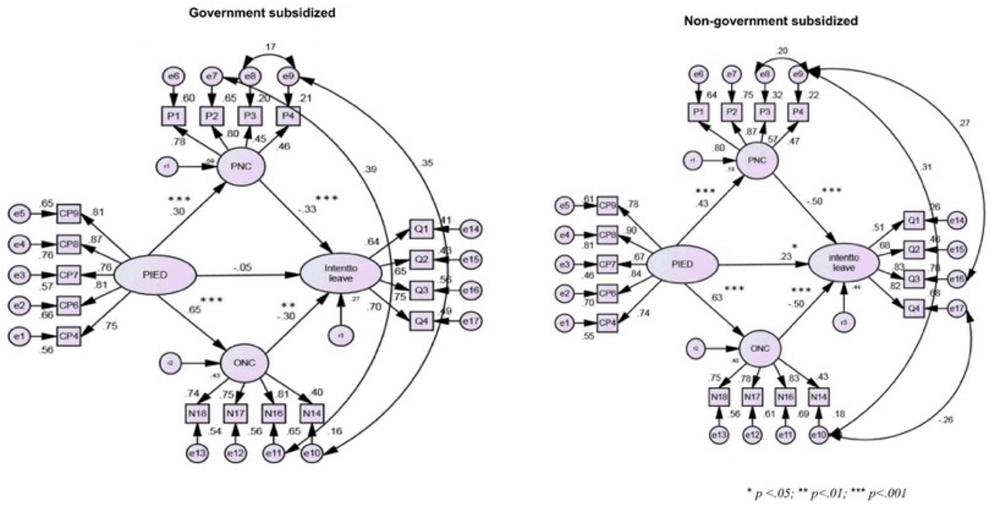 Figure 1:  Structure equation model of interrelationships between perceived investment in employee development, and the professional normative commitment and intent to leave constructs.

Employee development is one of the most important functions of human resource practice. Training and development directly influence employee behaviors in the workplace31. Koster et al34 found that a firm’s investments in general training significantly contribute to the perceived support in employee development, and such perceived support is negatively related to employee intention to quit. Lee and Bruvold24 noted that PIED was positively associated with job satisfaction and affective commitment in a study analyzing data from 405 nurses from the USA and Singapore. In addition they found job satisfaction and affective commitment mediated the relationship between PIED and intent to leave24.

In the present study, the authors found a difference in perception of employee development between healthcare workers with government subsidies and those without. The present study’s results showed a complete mediating effect of dual normative commitments on the relationship between PIED and intent to leave in those individuals with government subsidies, while no such effect was seen in those without. This implies that the higher the health worker’s perception of government support in their career development, the lower the intention to leave. The total effect of PIED on intent to leave was –0.345 in government subsidized health workers. The higher PIED with subsequent lower intent to leave was through commitment enhancement in both professional and organizational commitment. This result also signifies the importance of PIED in setting government health policy about retaining healthcare workforce in rural and underserviced areas. Healthcare workers are more likely to leave rural areas when they perceive low PIED or unfairness of training and support from the organization. This might explain the positive association between PIED and intent to leave (r=0.19, p<0.05) in those health workers without government support. This also indicates the importance of organizational investment in employees’ career development to enforce their professional and organizational normative commitment and, further, to increase their intent to stay in this work field.

Since most health workers in remote or isolated islands were working independently or in a small group with mixed professionals and lack of healthcare resources, these study results provide government health policymakers with empirical evidence of increasing retention strategy of health workers in underserved areas. First, when the government has good career planning for those health workers, they are more likely to stay and work in the underserved area. Second, to reinforce the health workers’ both professional and organizational commitment is an important issue in the human resource management to provide better health care in those underserviced areas.

First, this cross-sectional analysis could not draw inferences of causality25. A longitudinal research design is needed to draw causality inferences from the current results for future studies. Second, the generalizability of the results might be limited due to the study samples being restricted to healthcare workers in underserviced areas.

The present study indicated the importance of organizational investment in employees’ career development to enforce their professional and organizational normative commitment and, further, to increase their intent to stay in this work field.

15 Randhawa G, Kaur K. Organizational climate and its correlates: review of literature and a proposed model. Journal of Management Research 2014; 14(1): 25-40.

This PDF has been produced for your convenience. Always refer to the live site https://www.rrh.org.au/journal/article/4837 for the Version of Record.